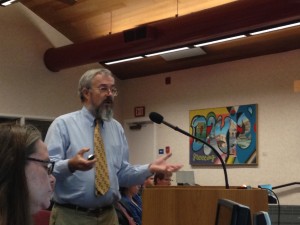 While Herb Niederberger noted in his email, “’Modified CBFR’ eliminated the prior 6 month look-back, but in doing so transformed the original CBFR rate design into the aforementioned Conventional Rate Design where 13% of the total water revenue required is recovered from the revenue derived from fixed rates.” But in effect, that’s what they have done with the original CBFR anyway.

What they have basically done is calculated the revenue they need, estimated the supply charge based on that revenue need, and as long as they keep the rates at or before the Prop 218 noticed levels, they are okay legally doing so. At the same time, it is believed that they have probably over-estimated the charges in order to be sure they meet revenue needs.

As one councilmember told the Vanguard, in following the legal restrictions of the noticing provisions of Proposition 218 (as recommended by their Prop 218 lawyer Kelly Salt and their rate consultant Doug Dove), the city has done away with the most appealing parts of CBFR and left in place the worst elements such as the look-back.

Herb Niederberger explains some of this in his exchange with Brett Lee on Tuesday night.

Brett Lee stated, “One of the elegant things about the CBFR proposal was that people were charged exactly based upon their proportional use of the plant and the proportional costs of the plant.”

But, as Mr. Niederberger explained, that’s not how the city is doing the calculations presently.

“What you are talking about originally with the look back was how we originally proposed CBFR but it became really apparent that we couldn’t give you a year-to-year projection on how much revenue would be generated if we were constantly changing that rate,” he explained. “So one of the solutions was the six-month look-back and we fixed the water supply fee based upon a projected demand during that period. So because remember we have a demand and then we projected a reduction in demand over time because of the conservation but again remember that demand peaks in July.”

Mr. Niederberger continued, “If we take the hypothetical average user – the median user is 11 CCF per month over time, but during the peak period it’s 17 CCF per month – you take that portion of the demand divided by how much revenue you need to generate and that’s how that’s how the revenue is calculated on the supply fee but it takes all those components, groundwater, surface water, and capital, and puts it into that fee. “

He would add, “One of the things that my basic understanding of what is presented tonight is it essentially takes your supply fee and wraps it into your demand fee, so it’s really two components I think, it’s really a fixed portion and a variable portion but the variable portion is two components, both new charge of demand and supply fee. So what I think what happens there is you end with a fee where you’re only collecting 13% of your revenue in the fixed charge, the other 87% is in this variable charge and that’s the fundamental difference between what was proposed tonight and what was proposed last year with the six-month look back.”

Councilmember Brett Lee continued, “So under the currently envisioned CBFR process there is estimation going on. There is estimation of what the general overall demand will be incorporating that conservation component, and then the price per ccf is based upon the 218 rate that was calculated based upon the assumed usage and the need to cover the revenue.”

Harriet Steiner agreed with Councilmember Lee’s interpretation.  If Kelly Salt and Doug Dove had been in the room, they would have agreed as well.

What becomes clear is that the city did not do what the voters thought they were doing in terms of CBFR and the Prop 218 rates. Unfortunately for the voters, not only is the Prop 218 process itself limited as a mechanism for the voters to control water rates, but it’s limited in constraining the city – it seems that the city believes as long as the rates come in at or below Prop 218 published rates, they are in the clear in terms of transparency of formula.

I believe there is going to be a natural tendency for people to, as a matter of principle, vote yes on Measure P.

Matt Williams lays out the choices to the voters, “A Yes vote forces Council to change the rates. A No vote leaves it to Council’s discretion to change the rates (or not change the rates).”  Mr. Williams then states emphatically,  “With Council’s actions on Tuesday they made it clear that regardless of whether Yes prevails or No prevails the rates will be changing because of the input they have received from the community dialogue that the democratic process has produced.”

“Which of those two outcomes makes more sense to you?” he asks. “Said another way, what incremental benefit do you receive for taking on the incremental $25 to $100 million of fiscal liability risk?”

To evaluate the risk of liability, we go back to the city’s April analysis of the probable impact of Measure P’s passage.

Staff continues, “City staff has reviewed the fiscal and legal impacts if Measure P were to pass and has determined that the passage of Measure ‘P’ could have several adverse cost impacts. These impacts assume that the City will not be able to timely adopt new water rates that fully cover the upcoming costs of the DWWSP [Davis-Woodland Water Supply Project] and provide this funding within the timelines necessary to avoid a default on the City’s obligations for this project.”

Staff estimates that it would take 75 to 90 days (two and a half to three months) to adopt new water rates.

The city highlights several key impacts.  First, “Davis will not be able to proceed with financing of the DWWSP and will not have funds to proceed with the remainder of the Davis Water improvement projects.”

There are huge financial impacts of up to $25 million for the city of Davis, but the bigger problem is that damages to Woodland would be around $50 million.

City staff estimates, “Davis would likely miss the opportunity to finance the DWWSP and other Water improvements at the lowest interest rates. This has the potential to cost Davis residents over $100 million in long term project costs.”

Third, “If the City cannot perform its obligations to fund construction of the DWWSP and foregoes its chances to conjunctively use surface water to meet the demands of its residents, then the City will be mandated to retrofit at least 12 groundwater wells to treat for hexavalent chromium. The construction costs for wellhead treatment are estimated at $1 million per site or a $12 million immediate impact. The City does not have reliable estimated costs for the annual O&M costs for this treatment and removal but it could easily exceed $1 million annually.”

Finally, “If the City cannot perform its obligations to fund construction of the DWWSP and foregoes its chances to conjunctively use surface water to meet the demands of its residents, this will adversely impact the design and operation of the wastewater treatment plant improvement project. The City’s Wastewater NPDES Permit adopted in October 2013 contains water quality standards for Selenium and Electrical Conductivity that can only effectively be met with the City migrating to surface water or conjunctive use (combining surface water and deep wells). There are no viable solutions to meet these water quality standards through improvements at the wastewater treatment plant.”

Sue Greenwald differs in that view, putting out a statement to this effect, “It is unfortunate that city staff and the City Council have given false information to the press and to citizens regarding potential costs to the water project if Measure P passes. Not only is it morally wrong, but it deprives council of an important opportunity to learn what citizens really think about the rate structure. The truth is that the passage of Measure P will NOT cause the water project to fall through, will NOT cause the project to cost more, will NOT cause us to lose low interest loans. All Measure P does is roll back the water rates to what they were last year for the 2 or 2 1/2 months until Council puts a fairer rate through the Prop. 218 process. Our reserves are more than enough to make up the relatively small shortfall. Since the project will not fall through, there will be no fines or penalties. And we will not lose low-interest loans. The state low interest loans were lost because council made a terrible error when they chose a project with privatized operations. The state has a law against giving its low-interest loans when projects with privatized operations are involved. This problem has nothing to do with Measure P one way or the other.”

The voters will naturally have to weigh the risk here. The city obviously paints the worst-case scenario, but that doesn’t mean they won’t find a way to make it through the 90 to 120 days it would take to come up with new rates and put forth a Prop 218 process. Woodland obviously would have a vested interest in seeing that the project not collapse in the interim as well, which is something that the city staff report does not seem to take into account.

That leads us to a final point which is people will naturally wonder why Davis has turned their process into a circus while Woodland has managed to get to the point of implementation with no drama whatsoever.

When I looked at the current rate impact in the fall of 2011, I was appalled by the inequity in the traditional rate structure. Matt Williams and Frank Loge noted this deficiency as well and constructed a way to greatly reduce the inequity. They convinced first the WAC and then council and ultimately the community through Measure I, and got the Prop 218 to go along with it.

If there was a fatal flaw here, it was born out of good intentions of fixing a very inequitable system. It was this system that Donna Lemongello and Matt Williams a few weeks ago set about making even more equitable.

The council on Tuesday committed to changing and fixing the rate structure. You may not trust them to do so, and that is perfectly understandable. At the same time, it does not appear that anything in Measure P will change who sets the next water rates and how those water rates are changed.

13 thoughts on “My View: Bait and Switch on Water Rates?”