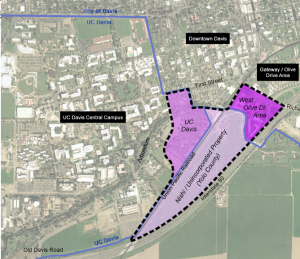 Last night, the city of Davis hosted the first of two community-based planning meetings to discuss planning for the Nishi-Gateway project. Last night’s session began with a presentation about the project similar to the ones that were presented to the city of Davis and the Chamber of Commerce back in February.

The 45-acre site and the adjacent Solano Park property would house about 1200 housing units and provide 1600-1700 jobs. This would be high density urban housing, for students and recent graduates.

In attendance on Wednesday were at least forty individuals from a broad swatch of the community, including representatives from the university, the county, the business community and the city.

There will be another meeting tonight from 6 to 8 PM at the Clubhouse room at the Veteran’s Memorial Center, which will focus on economic development and housing opportunities for Davis Nishi Gateway.

Last night’s meeting had an impromptu public discussion after several members of the public objected to the format, that would have broken people into groups to examine specific proposals and make comments on note cards.

Former Mayor Sue Greenwald was concerned about the circulation issues on the site which is surrounded by railroad tracks to the north, the I-80 freeway to the south, and only has access to Davis through Richards Blvd. to the east.

Staff reported earlier this year that the applicant has already engaged traffic and archeological consultants for background investigations and conducted preliminary engineering feasibility for a railroad grade-separated crossing, and obtained approval from UPRR (Union Pacific Railroad) in concept.

Sue Greenwald expressed her concern about the circulation, stating “It’s critical to have egress because anyone who’s on the site is going to be trapped between a railroad with fracking cars, trains filled with fracking oil and a big fence and a freeway.”

She continued, “My concern is before we waste a lot of money on consultant fees, deal with the circulation problem. It seems to me the way you have it set up right now, the egress is too close to the middle, it should be more towards the end.” She added, “You don’t want people caught in a parking lot at that end, without having a means of egress.”

Ms. Greenwald added, “I don’t think it’s a good idea to put retail on the site. You mentioned the downtown of Davis, the character of Davis, and the things that are uniquely Davis, what’s uniquely Davis is that we have not spun out the way Berkeley has with a ton of different retail centers and had our downtown suffer. This is close enough to walk downtown so I think that it’s better not to have retail on this site, maybe one coffee shop.”

Mr. Pinto also stated that they are still looking into the circulation issue.

Alan Miller said, at this early stage in planning, that “the key thing here is infrastructure, what is the basic layout going to look like? That’s what important right now.”

“My question is… why do you have the roads laid out the way you do? The reason I’m asking that is that my understanding is that we’re going to have the ability to come to Richards and Olive and instead of everybody going through downtown, they can now turn and go to the campus by going up Richards, through the Nishi property to campus which would greatly improve circulation downtown,” he said. That’s not how it’s laid out, and he suggested putting in a curve.

Rodney Robinson stated that the added traffic “would further congest the already congested Richards Blvd. area. I see that as huge negative that’s not being addressed.”

He added, “I think generally the campus has a lot of athletic space along Russell Drive and elsewhere. There’s a baseball field that’s adjacent to the tracks. I would suggest move all those athletic fields into the Nishi if you want to do that, put all of the campus housing onto the core of the campus.” He would add, “(forget) this development of the Nishi project, I still stand for Plan F which is farmland.”

She asked, “Who is the housing for, how many units are we talking about, that ties into all of the circulation issues, there are enormous circulation problems in this area that have been known for decades, I don’t see a solution being presented.”

Ms. Samitz added that the university is planning 5000 new students and has been generally resistant to building new housing – “is this supposed to be the housing project for the out-of-state, out-of-country students who are paying higher tuition?”

She added, “This is the worst location in the entire city to handle vehicular traffic.” She added, “Who is going to pay for those solutions?”

The consultant said they are looking at 1200 units on 90 acres. He explained further, “The idea here is not student housing, this is housing for not just students but graduate students, families, but also a segment of the population that doesn’t get housing in Davis which are those newly graduates that don’t want to live in student housing, but can’t afford the higher end housing.”

Ms. Samitz responded that her point was that this was primarily housing with some commercial.

Mr. Pinto responded, “I have to differ with you strongly, actually.”

At that point, the meeting moved to a more informal nature. Tonight there will be further discussion about the economic development aspect of the project. Again, that begins at 6 pm at the Veterans’ Memorial Center.