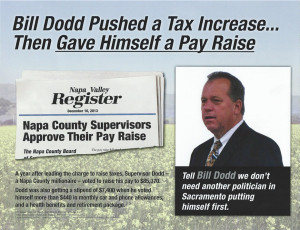 Last week, the Vanguard reported that the Opportunity PAC, “A coalition of teachers, health care givers, faculty members, school employees, and public and private employee associations,” has lined up more than $500,000 in opposition to Democratic Candidate Bill Dodd, a Napa County Supervisor.

The latest missive accused Bill Dodd of “living the high life.” It argues that Bill Dodd asked the citizens to pay higher taxes and then raised his own pay.

“Over the last two years, Supervisor Bill Dodd campaigned to raise local taxes and then voted to raise his pay to $85,370.00,” the latest brochure states. “Dodd – a Napa County millionaire – also voted to give himself a benefits package worth more than $38,800.00 per year. Taxpayer provided perks include: monthly car allowance; monthly cell phone allowance; generous health benefits; and retirement package.” 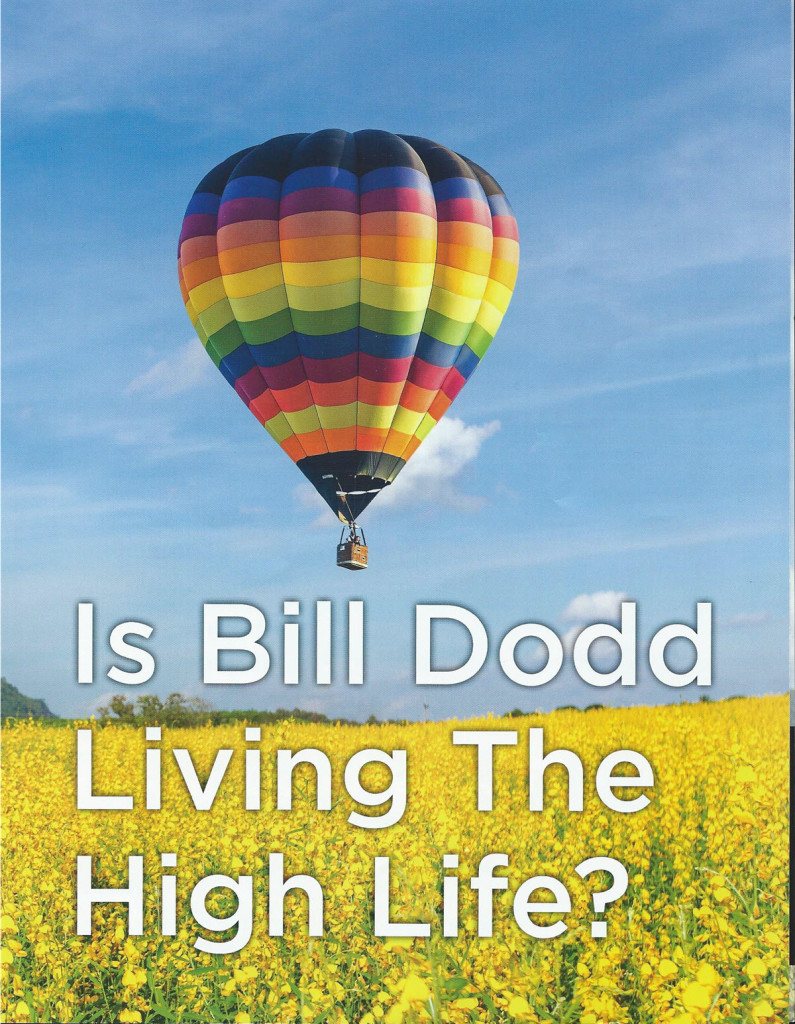 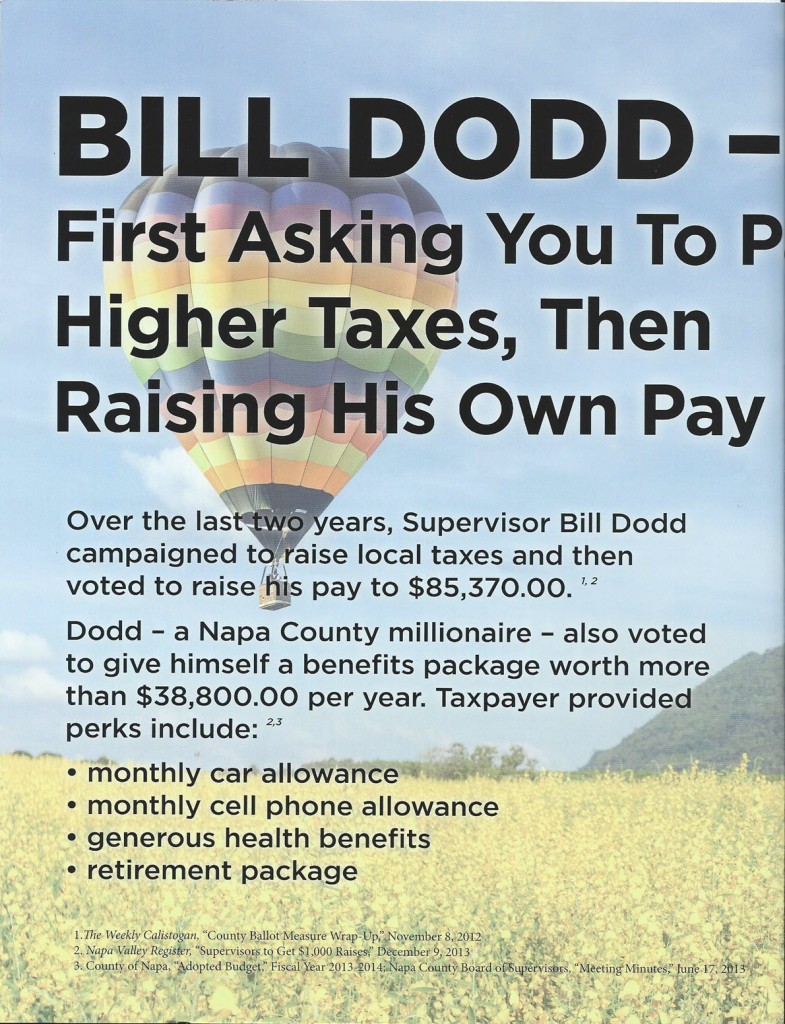 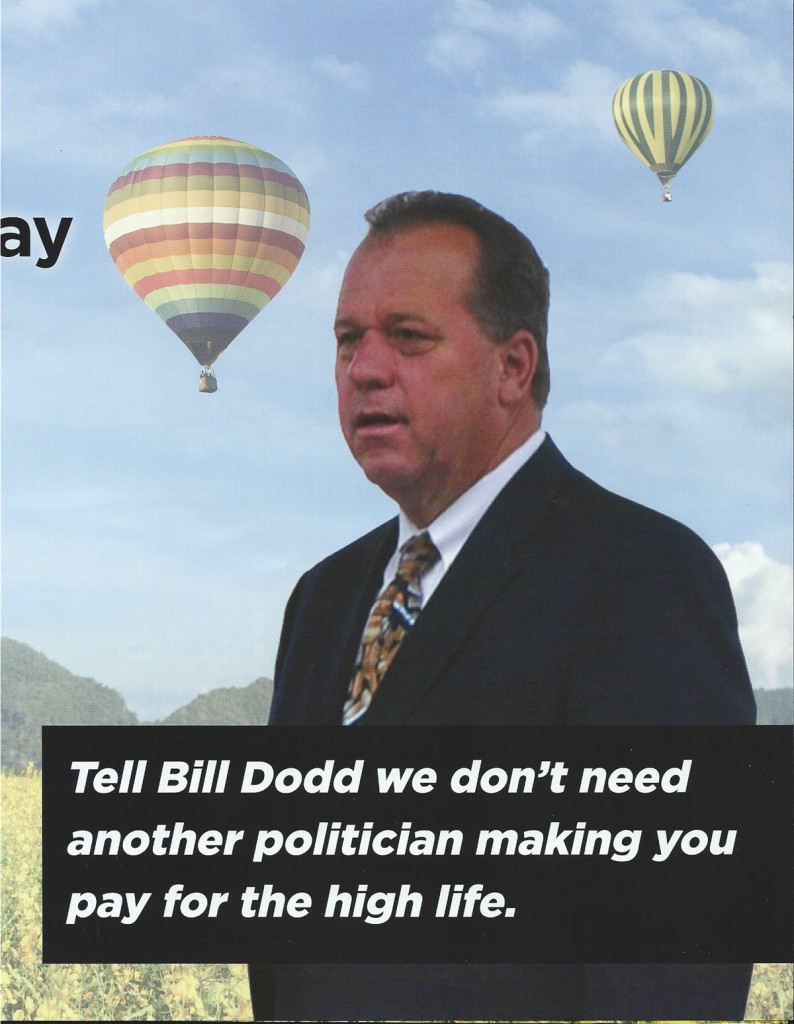 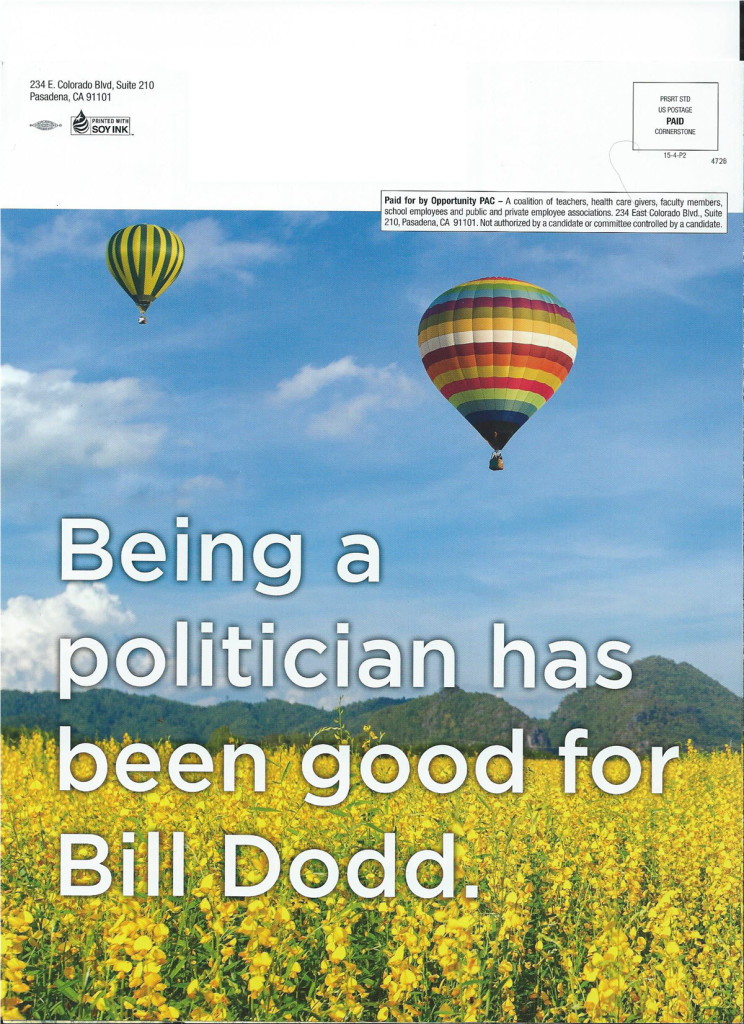 But, just like last week’s ad, the latest missive represents a heavy distortion from the facts. In December, the Board of Supervisors did approve a 1.4 percent increase in salary, an additional $1000. It represented the first pay increase in six years.

The article continues, “Napa County supervisors by law receive 47.09 percent of the Superior Court judges’ salaries. The 1.4 percent pay bump will take their annual salaries from $84,204 to about $85,370. The county received notice Dec. 2 of the judicial pay raises, which are also retroactive to July 1, according to a county staff report.”

The distortion was so great that on Sunday, four days after the Vanguard article, both Enterprise reporter Cory Golden and columnist Bob Dunning attacked its veracity.

Mr. Golden writes, “Last December, Napa supervisors did approve a pay raise — but they didn’t have a choice. Superior Court judges had received a 1.4 percent raise, and, under a line in the county code written in 2005, supervisors’ salaries are to remain at 47.09 percent of those paid to judges.”

“It marked the board’s first pay increase since 2007 and upped Dodd’s salary to $85,384, according to the county’s director of human resources, Suzanne Mason,” the paper reported. “The mailers say that Dodd also ‘voted’ for an increase in his own benefits. According to Mason, the vehicle allowance for elected officials and department heads has been $440 per month since 2001, and retirement benefits predating October 2011 have not been altered (the county has added two tiers since).”

“The mailers also mention a ‘$7,400 stipend.’ ”I don’t know anything about a stipend,” said Mason, except for $180 a month for cell phone and mobile data costs. About half that amount, for cell use, was set in 2006, while the data plan money was added in 2011,” the article continues.

“Did Dodd push for a tax increase? Yes and no,” the article asks. “In 2012, he campaigned for Measure T, a half-percent sales tax increase to repair roads. It won’t go into effect until 2018 — at the same time an existing half-percent sales tax for flood control expires. So taxes actually won’t go up. Voters in Napa, whose roads were ranked second-worst in the nine-county Bay Area, supported Measure T with 74.77 percent of the vote.”

As Columnist Bob Dunning notes, “If the best dirt all those concerned Pasadenans can come up with on Bill Dodd is that he raised his own salary by 1.4 percent, which translates to a whopping $83-a-month increase, they don’t have much. Certainly not enough to waste on a mailer.”

After one mailer, it was hard to know if that was the crescendo or the warm-up act. Two mailers suggest that these folks are serious about pressing this line of attack.

However, they run into some practical problems, as well. The Davis City Council voted last fall to raise their salary from $669.42 per month to $1138. That was the first raise in well over a decade.

Joe Krovoza, a candidate for Assembly as well, voted for the raise, but did so knowing he would not be on the council when it takes effect.

Dan Wolk dissented. He argued the $30,000 or so saved by keeping salaries at the current level would be better spent elsewhere and it sends the wrong message to city employees.

He said during the meeting, “I think that in this financial period where we’re cutting, and every dollar counts, I think raising council compensation is not a good idea, not only financially but also for the optics of it.”

Both Dan Wolk and Joe Krovoza voted to put Measure O on the ballot, which institutes the same half-cent sales tax that the Napa board of Supervisors is accused of supporting.