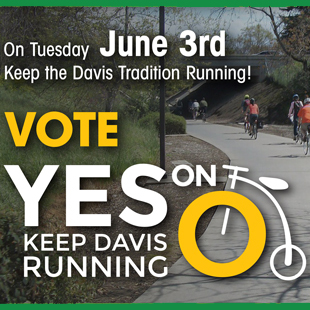 On Measure O, the Bee writes, “The equation behind Measure O is simple math: A well-run city plus years of deep budget cuts equals a justifiable request to extend a half-cent city sales tax for four years, until 2020, and increase it by another half-cent.”

The Bee continues, “The measure would raise about $3.6 million a year, which the city desperately needs to keep operating without having to curtail basic services any further. The city has already put off crucial maintenance to roads and parks, and reduced its workforce by about a quarter.”

“Opponents to the measure lay the blame for fiscal problems on the City Council,” the Bee writes, though they would be better served explicating the difference between the culpability in the previous councils to the good work they identify in the current council where they write, “Not only is it not true, the current council has done an admirable job responding to the recent economic downturn and the resulting years of revenue shortfalls.”

“Still, approval of the measure will not relieve the council from having to make some hard decisions about next year’s budget, particularly when negotiating contracts with city workers. Even with extra sales tax revenue, the city expects a $1.5 million deficit,” the Bee correctly points out. “Measure O gives city leaders some breathing room to make smart decisions about restructuring the city’s finances.”

“This measure would repeal the higher water rates the council passed last year as part of the multimillion-dollar Davis-Woodland Surface Water Project – and put the future of this important project in jeopardy,” they write.

“The supporters of the measure contend that the project’s consumption-based water rates are too high and unfair to single-family homeowners,” they write, “These are not new arguments, and come from the same group of people who tried unsuccessfully numerous times to fight the project and kill the new rates. Voters endorsed Measure I last year, clearing the way for the rates. Opponents need to let it go.”

“Besides, it makes sense to base rates on summer water use, when hot weather requires the soaking of lawns and filling of pools,” they add. “And the rates must account for more than just the cost of water; a significant investment is necessary to keep the taps flowing for years to come. Davis’ novel approach to paying for its water and water infrastructure should be celebrated for its sustainability, not demonized.”

However, they add, “City officials should continue to review the impact of the new rates to make sure they are accomplishing goals and not unduly penalizing any one group of users. If future rates need to be adjusted, that should be directed by elected officials, not by the ballot box.”

They note, “The biggest concern with Measure P is that it could threaten the viability of the entire water project. Without the revenue from the new rate structure, Public Works Director Herb Niederberger says, the city would not be able to pay its share and, if it defaults, could be liable to the city of Woodland for $50 million. Davis can’t afford to risk the water project by repealing even one part of it.”

5 thoughts on “Sacramento Bee Adds Voice to Call for Measure O, No on Measure P”