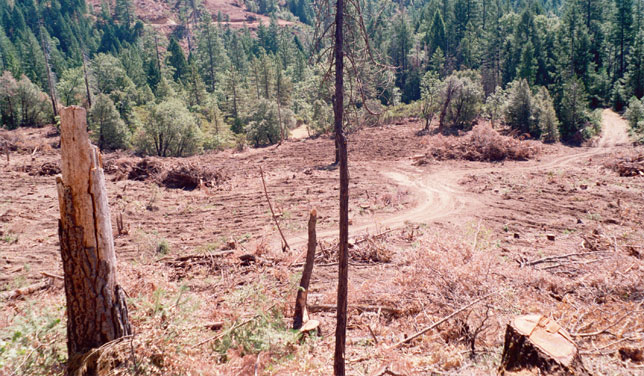 On Tuesday May 13, 2014, the Davis City Council unanimously approved a resolution to call on the state legislature and governor to enhance protections for California’s forest watersheds and ban clearcut logging in California.

Currently, California law allows all trees to be cut on large tracts of forest (clearcutting) followed by the planting of new trees as factory farmed industrial plantations of only one or two tree species. Toxic herbicides are applied to prevent the growth of ‘undesirable’ tree and plant species. Over a million acres in key watersheds in the Sierra Nevada, Cascade and Redwood forests are in the process of being converted to highly uniform, fire prone tree plantations.

Clearcutting and tree farming create a sterile landscape much like factory-scale corn, soy, or alfalfa fields, allowing minimal natural plant and animal biodiversity, and creating soil disturbance and run off which pollutes waterways and releases large amounts of greenhouse gasses into the atmosphere. Maintaining natural, mature forests is increasingly recognized as vital in reversing climate change.[ii]

The Davis resolution also calls for a California prohibition of the outdoor cultivation of genetically engineered tree plantations, an even more aggressive and chemically intensive form of factory tree farming for which biotech corporations are currently seeking approval at the USDA. Opponents warn that such genetically engineered tree plantations, if approved, could make destructive clearcutting even more profitable and desirable to the timber and tree pulp industry, and could present serious biological contamination dangers to the integrity and health of California wildlife.

Opponents of clearcutting call for trees to instead be logged using a less destructive method known as selective harvest, which involves the planned removal of carefully identified trees, while leaving overall forests intact.

Sierra Club representative Juliette Beck hailed the Davis city council’s action, saying “This resolution against clearcutting marks the beginning of a turning point in California, away from destructive and toxic factory tree farms and toward more ecologically sustainable methods of selective logging which will preserve healthy forests, the Earth’s climate, and more stable jobs in forest products and tourism, far into the future.”