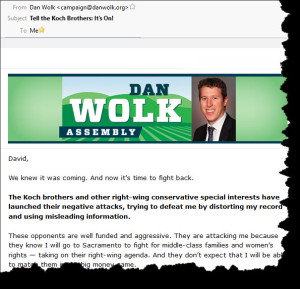 Back when I was an aspiring political scientist, I used to study the impact of campaign ads on things like voter intention, and also voter knowledge. Within the literature there was a consensus belief that negative ads were more effective than positive ads and, while some of that was rooted in the nature of how to get voters to pay attention and recall information, part of it was actually rooted in the fact that negative ads often contained more information than positive ads.

There is also the prevailing wisdom that, while voters claim to despise negative ads, such ads had proven rather effective in changing the nature of the race.

For a lot of reasons, much of it rooted in research on impacts of campaign spending and ads, I have never been quite as alarmist as some about the impact of money and campaign spending on the sanctity of democracy.

The first time I started to veer from that view was when I was studying the impact of firefighter spending in Davis, both on the ability of candidates to get elected and the ability of that union to sway the public policy of those they supported. Davis, however, presents a unique system where campaign spending is overall very low and artificially constrained by $100 campaign limitations.

That enabled firefighters, through the bundling of resources and independent expenditure (IE) campaigns to, by themselves, account for a very sizable contribution overall within the scheme of things.

The assembly race was unusually quiet up until a week ago. Despite the seeming intrigue of the mayor versus vice mayor showdown, the public interest never really emerged.

The first troubling aspect of this is that the attacks waged so far by both sides are downright lies. The Opportunity PAC, made up of unions and labor interests, are attacking Bill Dodd for taking a raise that was actually tied to judges’ pay increases put forth by the state and a tax increase that not only simply offset an expired tax, but matched the tax increase put forward and supported by both Dan Wolk and Joe Krovoza.

The FairPAC has responded with – as we reported yesterday – four accusations against Dan Wolk which bear really no resemblance at all to reality.

Dan Wolk is attempting to take advantage of the attacks on him, writing his second solicitation piece and arguing, “Our campaign wouldn’t set such an ambitious goal if it wasn’t necessary to fight back against the false attacks against me from groups sponsored by right-wing extremists like the Koch Brothers and Big Oil companies.”

He writes, “These attacks ‘fail the truth test’ according to the Davis Enterprise and Napa Valley Register. And the Koch Brothers’ track record attacking President Obama, Elizabeth Warren and Democrats across the country shows us that they are just getting started.”

The actual ties to the Koch Brothers, as we noted on Friday, are tenuous. The FairPAC is indeed largely funded by right wing interests, but the Koch Brothers only gave $6800 and they did so in May of 2013.

In reality, as the Wolk campaign concedes, the Koch Brothers know nothing about Dan Wolk and have no interest in his campaign. We get what the Wolk campaign wants to do here – first, yell about the boogie man to scare potential supporters into contributing and, second, turn this race into a Wolk (the Democrat) versus Koch Brothers (the evil corporation) battle in hopes that Dan Wolk can emerge as one of the finalists in November.

That is far from assured at this moment, with Bill Dodd’s sizable war chest – another potentially formidable Republican, and Dan Wolk splitting his home base with Joe Krovoza.

From our perspective, the alarming aspect is not that the race went negative, but rather that the negative attacks bear no resemblance to reality.

We could come up with a list of issues for which Dan Wolk deserves real criticism from his three years in office. He indeed flipped-flopped on shared management of the fire department after his mother came out in a letter to the city against it.

On the other hand, he held strong on issues like the plastic bag ban, even when his mother opposed it and when constituents were at best ambivalent. He also stayed strong in favor of fluoridation, as his colleagues opposed it and at least a vocal sector of the community did, as well.

We could have an interesting debate on whether it should be Joe Krovoza or Dan Wolk, based on labor issues in the city, environmental record, and overall professional record.

We could have a debate as to whether the huge amount of money that Bill Dodd has received indicates that he changed his political party for convenience.

Instead, we have a huge amount of attack ads, none of which have any bearing in reality, and instead have co-opted a reasonable policy discussion.

If this represents the current state of affairs in the political world then we should really shudder for the future of democracy. If the Supreme Court’s ruling on independent expenditures being equated to free speech means the freedom to tell outright lies, how is speech free anymore?

The reality is that the truth no longer matters because the truth is drowned out in a barrage of colorful brochures backed by hundreds of thousands of dollars of lies.

I think we all deserve better than this. The model, I think, should be Sam Neustadt. When supporters of his started attacking his opponent, he issued a press release stating that enough was enough and that the race needs to be about his record of accomplishment.

What if just one of the candidates, in the face of the lies and smears, got up and stated publicly that these are despicable lies and demanded that all groups involved in them cease and desist?

Yep, that’s not political reality either. We simply have a system degrading even more to the lowest common denominator.

The real danger here is that the voters simply get fed up and vote none of the above. Joe Krovoza and his team are sure hoping that’s the case.