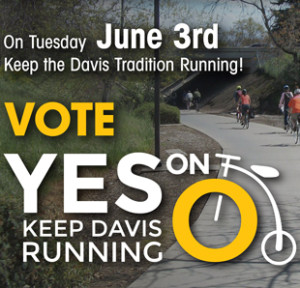 The Vanguard has been sounding the alarm when few in the city really understood we were in fiscal hot water. As recently as 2009, the city was planning budgets that assumed that the downturn in the economy would be short-term, that revenues would grow, that we could hold the line through a mix of employee attrition and withholding money from longer-term investments like roads to make it back to fiscal stability and sustainability.  History tells us that those budgets were painfully shortsighted.

The majority of the 2009 council, and the city staff in place at that time, would have been stunned if they had been told that for a fact that five years later we would be forecasting $7 million deficits into 2017-2018.

That sets the stage for a letter to the editor in the Enterprise from Jeff Boone, with whom Vanguard readers are well familiar, which expresses his overwhelming frustration with the current state of the city’s fiscal affairs. In a real way, I do not blame the frustration expressed by Mr. Boone.

He noted his participation in a focus group where “the information provided by the city was shocking.” He writes, “Previous City Councils had grossly over-compensated and over-expanded our city labor, and to hide the extent of our problems, moved money between accounts and deferred road and building maintenance.”

Bottom line: “With this knowledge, the group reluctantly and tentatively agreed to support a sales tax increase, and possibly a future parcel tax increase. But we were unanimous in demanding that new tax increases be temporary, to be replaced with permanent revenue increases and expense cuts, and we received this assurance.”

What changed? He writes, “Unfortunately, recently the mayor and a council majority failed to give adequate time for a critical presentation on proposed economic development. The agenda item was tabled for four weeks. This action, combined with the money and time council is dedicating to other nonessential topics, makes it clear that the majority of our current council is only paying lip service to the urgent need to develop our economy.”

“For that reason I have changed my mind and will vote no on any tax increase measure. I urge my fellow citizens to do the same. And I also encourage all citizens to ask current council candidates their position on city economic development and vote accordingly.”

Again, Mr. Boone’s frustration is understandable, but let’s look at what has happened here, and how we need to move forward.

What happened back in April was the confluence of several factors.

First, we have been complaining about this for a long time – the management of the agenda is abysmal. The city takes up prime on recognitions and other ceremonies that should be used on the consent agenda. Second, the city puts too many items on the agenda. On that particular night, the agenda was piled on so heavily, in part because it was City Manager Pinkerton’s last meeting, that they eventually had to push off items to later weeks.

The question is, why not do that in advance?

Making matters worse, the council spent an inordinate amount of time on one item. While that happens unavoidably, it is not good management.

The result is that the Innovation Center discussion was pushed back until midnight, and the council, recognizing a need for more discussion and explanation, decided to push the item off.

Now, Brett Lee tried to get the one needed action item on the Innovation Center and the RFEI (Request for Expressions of Interest) to be passed by council so that Rob White, the city’s Chief Innovation Officer, could move forward with his RFEI.

It was here that the item got caught up in politics.

Councilmember Lucas Frerichs then intervened: “My first comment is that I just don’t think we should be taking up this item in rapid fire pace and then approving it at midnight. I just think it deserves more actually thorough vetting and conversation.”

He also had an issue with the process, “in particular with regards to the county.” He noted that this was taking place “on a number of properties in the county. In terms of process, has this been… have we had these conversations with the county thus far? I’m not sure that has occurred and frankly I think it might need to occur as a local governmental partnership with our county partner in this case, before we… I’m all in favor of fast-tracking this and getting out to the public, we definitely need to get this moving.”

He said, “As far as I know there hasn’t been much in the way of precedent where any of the cities is having this kind of request for innovation proposals without discussions especially when it’s on county property.”

What happened next makes it clear what this is all about. The issue got placed on the city-county two-by-two where it became clear that Don Saylor wanted to play lord of the manor.

More importantly, he said, the county and city already have structures in place and he think they could bring the proposals to “this table” and allow the city and county to establish a community engagement process. He said, “For either one to proceed down a track without that framework discussion, it sort of opens up conflict potential. We don’t have to do that.”

Supervisor Saylor noted that a few years ago the county proceeded with a general plan update, studying the same areas we are discussing now, “and the city was not interested in that, in fact I was one of the people on the city council at the time so I know some of the discussions that happened and the community response to that consideration.”

But just to sure as to what happened at the end of the two-by-two meeting, Mayor Pro Tem Dan Wolk at the end of the meeting stated out loud, so that many could hear, that we just all needed to follow Supervisor Saylor’s lead.

Could the council have pushed the Innovation Center through? Perhaps. At the two-by-two, Joe Krovoza aggressively pushed back against Don Saylor’s accusations that this was a developer-driven process and that the county had been cut out of discussions.

In the meantime, voting against the sales tax will make moving forward with economic development much less likely.

When we asked Rob White what the impact of the failure of Measure O would be on economic development efforts, he stated, “Since the majority of economic development at the City is being done by two people (the Chief and Deputy Innovation Officers), it would have a significant impact. It would translate into delays in meeting with new and growing businesses, less outreach to local businesses, slowed work on the innovation park, an inability to assist in expediting permits and planning, an inability to work on Yolo County-wide initiatives like broadband and rail relocation, and considerably scaled back interaction with the University on tech transfer and innovation.”

“More directly, it would mean that an already very under-staffed division would become mostly reactive and move away from proactive or planned actions and activities. I am not suggesting that more resources be directed at economic development, but cuts would hamper our current efforts. It would also mean that any regional interactions would need to be significantly scaled back, which would considerably hamper our local ability to facilitate new investment and attract new businesses,” he continued.

“I am willing to give some benefit of doubt in support of plans for progress. But despite the existence and good work of Rob White, it appears he is up against the standard political wall of denial and business as usual,” the poster added.

At the same time, what needs to become clear is that Rob White may actually be understating the impact of the failure of Measure O.

If Measure O fails, the city is looking most likely at the 25 percent cuts, because they are not going to want to pursue cuts of police and fire (and for good reason).

Given that, the conversation and energy in city hall is going to shift from economic development and expansion plans to contraction and minimizing the loss of city services.

Leaders will look at ways to preserve most of what we have until we can get to November and put a parcel tax measure on the ballot. Of course, there is no guarantee that it would pass, but the Vanguard believes any such effort would push off discussion and planning for Mace 200, take the steam out of economic development drives, and perhaps set back the entire effort by two years until the city shores up its fiscal position.

The process is going to be slow, it is going to be frustrating, but believe me, you want the city to be able to be fully engaged on the process of economic development and that is not going to happen if Measure O fails.

The best strategy to move forward is to put a council together that is going to prioritize economic development, push them to hire the right city manager, and give Rob White and other staffers the resources and the team necessary to get this done.

Patience, not panic, is going to win this day and push this process forward.

55 thoughts on “Sunday Commentary: Cutting Off Our Noses to Spite Our Faces on Measure O”