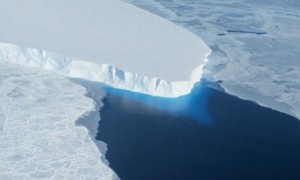 However, the Debate Will Likely Continue About Its Basis in Reality: Last week it was reported by the New York Times, that a large “section of the mighty West Antarctica ice sheet has begun falling apart and its continued melting now appears to be unstoppable.” The Times adds, “If the findings hold up, they suggest that the melting could destabilize neighboring parts of the ice sheet and a rise in sea level of 10 feet or more may be unavoidable in coming centuries.”

“This is really happening,” Thomas P. Wagner, who runs NASA’s programs on polar ice and helped oversee some of the research, said in an interview with the Times this week. “There’s nothing to stop it now. But you are still limited by the physics of how fast the ice can flow.”

Two different groups of scientists released reports that found “that West Antarctic glaciers had retreated far enough to set off an inherent instability in the ice sheet, one that experts have feared for decades.”

“Today we present observational evidence that a large sector of the West Antarctic ice sheet has gone into irreversible retreat,” Dr. Rignot said in the NASA news conference. “It has passed the point of no return.

And yet, there is a good amount of uncertainty in the non-scientific world on the validity of the notion that this is caused by human activities.

However, an article in the Business Insider addressed the issue as to why facts do not sway climate deniers.

“There is a strong tendency, particularly in those supporting a scientific position, to think that if only the facts could be made clear, people would follow the logical pathway to an inevitable and common conclusion,” the publication notes. “We assume that our clarity of vision allows us to infer from a set of facts to a particular conclusion, and that those reaching alternative conclusions must be victims of bias or confused thinking. This often results in a conviction that saying something slower or louder will do the job.”

The Business Insider roots their discussion within the framework of Bayes’ theorem which they explain, “While being a statement about the probability of something being true, it can be thought of as the likelihood of someone believing that a view is true (say a particular theory or hypothesis), having assigned an initial subjective probability to that view and then processing some evidence in support of that view.”

Thus, new information is assessed not from a blank slate but rather as a means of accommodating new evidence, which leads us to an updated view of the world.

My own research work found that the stronger that someone held beliefs, the less likely they were to change those beliefs upon receiving new information. Worse yet, there was a strong correlation between knowledge and strength of beliefs. This meant that the more knowledgeable were resistant to changing their beliefs, while the less knowledgeable were less likely to encounter new information.

As the article explains: “Providing a rational person who has a weak prior belief in anthropogenic global warming (AGW) with evidence of sea level rise and claiming that this is a result of AGW. Such a person could be less likely to accept both that sea levels are rising and that this rise is a result of AGW.” They add, “For the rational person, using Bayesian reasoning, it takes more to change an existing view than it does to reinforce it. “

They add, “This explains why so much effort has been expended by those with financial or political reasons to oppose the science of AGW to provide evidence against it. If people have reasons not to change an initial view, then change is less likely, even if evidence for change is strong.” They add: “After all, it’s not as if belief in global warming is all about the science. It’s the prior beliefs that drive acceptance of or opposition to an idea.”

Instead, they argue that using facts as weapons is counterproductive.

“Facts are too often weaponised, with the assumption that clear and forceful statements translate into ready acceptance. Unfortunately, for those whose minds are set against it, the opposite is likely to result,” they write. “To address both beliefs and reasoning, our arguments must be be as thorough, rigorous, accessible and respectful as possible. Just don’t forget to include the facts.”

It also does not help that the media over-hypes this. For example, in the Guardian’s article on Monday, they note, “The loss of the entire western Antarctica ice sheet could eventually cause up to 4 metres (13ft) of sea-level rise, devastating low-lying and coastal areas around the world. But the researchers said that even though such a rise could not be stopped, it is still several centuries off, and potentially up to 1,000 years away.”

New York Times’ Andy Revkin, their environmental writer and proponent of the anthropogenic view, stated in a tweet, “Awful misuse of ‘Collapse’ in headlines on centuries-long ice loss in W. Antarctica.”

There is a real crisis, but the overstatement by the mass media tends to feed into the climate deniers’ hands.

75 thoughts on “Sunday Commentary II: Climate Change Beyond the Point of No Return?”