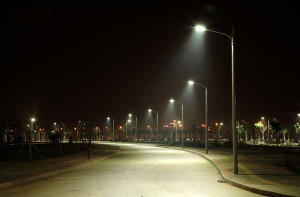 Back in January, the Davis City Council approved the implementation of the cobra head LED streetlight retrofit project. The council action was preceded by four months of project planning and negotiation between the city and Siemens.

At that time it was stated that the project would not exceed $1.255 million, to be funded through Roadway Impact Fees. The city estimate that the utility cost savings would be $172 thousand the first year with an addition savings of $28 thousand for street light maintenance. Moreover, there would be a one-time PG&E rebate of another $185,000.

The city estimated, “Based on a 3% annual utility and maintenance cost increase, the 15 year combined savings for this measure (assumed useful life of the LED lamps), is projected to be $3,730,638.”

The staff report notes, “In 2010, the City Council approved an agreement with PG&E through their LED Streetlight Turnkey Replacement Service program to convert 300 street lights using Federal EECBG [Energy Efficiency and Conservation Block Grant program] funds. This project was considered a pilot project to determine if the community would view the light changes favorably. If the feedback was favorable, the City would convert the remaining street and pathway lights as funds were made available. The lights were changed in the fall of 2010.”

The staff report notes that the pilot project has been ongoing continuously since 20011 and in that time there has been virtually no feedback, with the city reporting during the three-year period, only one documented complaint.

Writes staff, “Given the energy savings potential and the safety benefits of the LED streetlights, the City Council accepted and funded the LED cobra head retrofit using the pilot program as the standard.”

Staff continues, “Due to the success of the pilot program in terms of reduced energy use and improved safety lighting, Siemens proposed an LED product intended to match, as closely as possible, the light output of the fixtures included in the pilot project. Siemens recommended installation of the Leotek Ecobra fixtures as the most cost effective product that matched the pilot LED specifications and performance. These are the lights currently being installed in residential areas of the City. Consistent with roadway lighting practice and to match existing lighting levels, higher light output fixtures are being installed on higher volume streets (ie. arterials and collectors).”

The city needs approximately 2660 retrofits city wide, including 1300 on residential streets. There are four crews installing 150 per day since May 13, 2014 and 1000 fixtures have been installed to date.

One resident, who wrote a letter to Mayor Joe Krovoza and Mayor Pro Tem Dan Wolk complained: “The intensity is an issue. Hurts your eyes if you glance up; yet not such a great job illuminating the street when one looks around. All in all, yet one more way the City has made Davis a worse place to live. I suspect you have just lowered residential property values by over $5,000 per home to boot.”

They noted, “Julie Partansky was early on stressing the importance of the biological and psychological value of access to natural light, only mitigated by safety concerns. This seems to go in the opposite direction.”

They added, “Before you replace all 2,400 lights, you should consider spectrum and intensity. And then replace our street bulb with a lower intensity one and a more natural spectrum. As a process, it would make more sense to check with people who live here before you make such changes. Run tests. Ask for opinions and response. Before you make your bulk purchase, if that’s not already been done.”

According to the city staff, “The City has responded with email and phone contact to residents expressing concerns. The City responses have been educational in nature, acknowledging the difference in the light, describing the 2011 pilot project and its use as the basis for choosing the new fixtures, the desire to fix hundreds of non-working High Pressure Sodium (HPS) streetlights spread across the community, and the fiscal, environmental, and safety benefits associated with the project.”

Which, of course, is a good response when residents are complaining about the intensity of the light, the glare, and its blocking out of the night sky.

The city continues, “In addition, in response to the concerns raised by some members of the community regarding the lighting levels and intensity of the light, staff has reached out to the UC Davis California Lighting Technology Center (CLTC), to review any distinctions between the new LED fixtures and the pilot project fixtures in both light output and quality.”

One thing that is not clear from the staff report is whether the pilot project used the same light bulbs as the ones drawing complaints. The second problem is a standard communication problem between the public and the city – if the public does not provide feedback during pilot projects, the city has no recourse but to assume there are no problems.

The item will be heard tonight, as the city council will now have to grapple with how to deal with citizen concerns on one hand and cost savings and energy efficiency on the other.