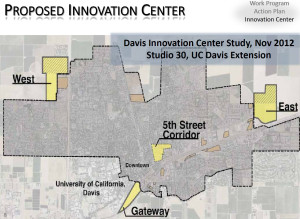 In last week’s article, I wrote about the City’s release of the Request for Expressions of Interest (RFEI) for a Davis Innovation Center last Wednesday (May 21st). This request is the culmination of several years of community discussion, evaluation and assessment to identify appropriate locations and attributes for meeting this need for space. The RFEI can be viewed on the City’s website here.

Since then, I have had proponents for the East and West Innovation Park sites (detailed in the November 2012 Innovation Park Task Force reports) state that they are actively working on their submittals. I have also had an early discussion with representatives with PG&E about what might potentially be done at their site (assuming terms could even be worked out). No matter what the outcome this process and resulting potential proposals by interested parties, the City staff are facilitating the discussion by working with the City Council and our other community and agency partners to develop opportunities for innovation businesses to stay and grow in Davis.

But I would like to offer three other examples demonstrating the City’s work to highlight Davis as an innovation community. These examples are a direct result of the City’s efforts, as described in Focus Area 1-Facilitate Technology and Business Development and Focus Area 4-Strategic Branding and Marketing of the Innovation and Economic Vitality Work Program, approved by City Council on May 13th. The work program document can be found here.

First, Davis was recently highlighted in a set of articles about the innovation efforts in our region. The articles were part of an ongoing special series by Xconomy (an online tech magazine) to highlight efforts of regional innovation clusters around the US. The pitch to have them focus on Davis and Sacramento was made by Dr. Dushyant Pathak, Associate Vice Chancellor, Technology Management & Corporate Relations at UC Davis. If you missed the Xconomy series of articles on the Davis and Sacramento Innovation efforts, you can find them here:

One result of the Xconomy articles was that I was asked to be a moderator at their Napa Summit on Technology, Jobs and Growth next Tuesday, June 3rd. As described on the web posting, “Napa Summit 2014 is an intimate and interdisciplinary gathering where passionate tech and life science entrepreneurs, executives, and investors join to talk through today’s biggest challenges and brainstorm about the future. Together we’ll examine the state of the global economic recovery and work through looming challenges in areas like education, energy, aging, healthcare, genomics, food, cybersecurity, R&D, and investing strategy.”

Sponsors of the Napa Summit include Silicon Valley Bank, General Electric and Intel. The panel I am moderating will be on Innovation, Geography, and Equality and includes the speakers Mike Finney from Michigan Economic Development Corporation, Steve Ciesinski from SRI International and Jon Haveman from Marin Economic Consulting. The Summit represents a chance for Davis to interact with representatives of successful innovation economies and learn from their successes and best practices. You can learn more about the Summit here.

Second, I was recently interviewed by a researcher working with General Electric on a study of civic innovation offices that have been started across the US. Though I was asked not to discuss much of the research until the release of the study in September, it was stated to me by the researcher that the Davis efforts appeared to be among the top five programs across the country. Following on the heels of this research query is another request by a researcher from Syracuse University in partnership with the City of Philadelphia. They are looking at municipal innovation efforts and initiatives, especially in the area of civic engagement.

Both of these research queries are examples of how the City of Davis is becoming known as a leader in civic innovation and that we are well on our way to establishing credibility and standing in this sector.

And third, in partnership with Innovate North State, the City of Davis will be the host for an investors’ forum in late June. The tentative date is June 30th and is an invite-only event that will bring together local, regional and Northern California qualified investors to determine investment opportunities in Davis and the region, with particular focus on Davis-based companies. The likely result from this forum is a venture fund that will be available for early stage startups in Davis and our region, but will also bring attention to the Davis innovation ecosystem from angel and venture investors outside of the region.

This works towards the goal of seeing more investment happen from outside the area in our local companies. A good example of this type of activity is the recent $15 million Series B funding for BioConsortia by two Bay Area venture funds. BioConsortia is the company recently brought to Davis by a couple of the executives that were previously with AgraQuest and they are moving in to a space next to Novozymes in South Davis.

Though there are many more examples of early successes in our efforts to be a leader in civic innovation and branding of the Davis innovation ecosystem, I wanted to share a few of them now as proof points. And this is just a detail of the City’s work… there are others working on this effort, including UC Davis, Davis Roots, techDAVIS and SARTA (to name a few). As we get further underway with the Innovation and Economic Vitality Work Program (which officially launched on May 13th), We will be reporting to our media outlets, partners, and back to City Council on a regular basis with both qualitative and quantitative results.

I look forward to your comments and questions. My email is rwhite@cityofdavis,org if you choose to email me directly.

8 thoughts on “The Davis Innovation Ecosystem – Are the City’s Efforts Working?”