Last week, the NBA had to deal with owner Donald Sterling’s racism caught on tape. They had no choice, in a league with just about every star being African-American, to come down and come down hard on Donald Sterling.

How do you defend Donald Sterling when he says on tape:   “It bothers me a lot that you want to broadcast that you’re associating with black people. Do you have to?”  He continues, “You can sleep with [black people]. You can bring them in, you can do whatever you want. The little I ask you is not to promote it on that … and not to bring them to my games.” He adds, “Don’t put him [Johnson] on an Instagram for the world to have to see so they have to call me. And don’t bring him to my games.”

So the NBA has come down hard, banning Donald Sterling for life and planning to force him to sell his team.

As Mr. Abdul-Jabbar wrote in a Time Magazine op-ed that the NBA was looking the other way for years at Mr. Sterling’s racism.

“They caught big game on a slow news day, so they put his head on a pike, dubbed him Lord of the Flies, and danced around him whooping,” he writes. “I don’t blame them. I’m doing some whooping right now. Racists deserve to be paraded around the modern town square of the television screen so that the rest of us who believe in the American ideals of equality can be reminded that racism is still a disease that we haven’t yet licked.”

“What bothers me about this whole Donald Sterling affair isn’t just his racism. I’m bothered that everyone acts as if it’s a huge surprise,” he continues.

“All this other stuff I listed above has been going on for years and this ridiculous conversation with his girlfriend is what puts you over the edge? That’s the smoking gun?” he writes. “He was discriminating against black and Hispanic families for years, preventing them from getting housing. It was public record. We did nothing. Suddenly he says he doesn’t want his girlfriend posing with Magic Johnson on Instagram and we bring out the torches and rope. Shouldn’t we have all called for his resignation back then?”

On the local front, the news has been captivated by the insensitivity or racism of students who made the mistake of planning a drinking game scheduled for Cinco de Mayo weekend. On Friday, students counter-protested, perhaps numbering 100, and engaged in a sit-in at the Coffee House, where employees of the student-run organization planned the party. 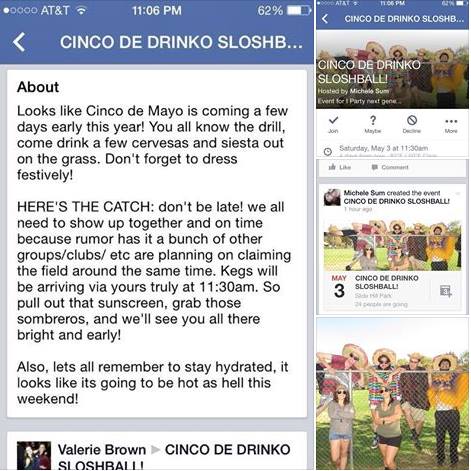 An April 30 letter from students reads:

We, as concerned students of UC Davis and Davis community members, would like to declare our utter offense and disgust with an off campus event organized by UC Davis students.

It has been brought to our attention that a “Cinco de Drinko Sloshball” facebook event page was created by UC Davis Coffeehouse (Coho) student employees earlier this week. The event is a party intended to have attendees dress in “festive” attire, meaning stereotypical “Mexican” dress (a sombrero and sarape, fake mustache, etc.). In addition, attendees are given an image that demonstrates the attire they should wear, which includes a border patrol officer costume. These images are hurtful to our community and only serve to create a hostile campus climate by sending a message of disregard and disrespect for the Chican@/Latin@ and Undocumented/Immigrant campus community.

Cinco de Mayo is a holiday that marks and celebrates the victory over French rule that was momentous for the state of Puebla, Mexico. This holiday is often manipulated by individuals, who use inaccurate images of Mexican culture and affiliate it strongly with alcoholic consumption, despite the fact that there is no real correlation between the two. The fact that these student employees, who represent the university, are perpetuating this ignorance with no sensitivity towards the Chican@/Latin@ or Undocumented/Immigrant community on our campus,is a reflection of the lack of respect for different cultures and student experiences.

It is ironic that this event is scheduled to take place on the same day as La Gran Tardeada (the culmination of La Raza Cultural Days), which in turn, marginalizes the Chican@/Latin@ community on campus even further. It is also an indication of where the campus-wide community stands when it comes to cultural competency and understanding and upholding our Principles of Community. La Raza Cultural Days and other cultural celebrations during the year are often denied adequate support. Regretful events, such as this “party”, tell us that we have not come as far as we’d like to claim with cultural competency and need to support these programs every opportunity possible. Cultural Days are in place as a means to educate the UC Davis and the community at large about the issues, culture, and struggle of various historically marginalized communities. This “Cinco de Drinko Sloshball” event invalidates years of work from multiple organizations, student centers, departments and students on a day that ironically is meant to celebrate and unite the community. We need to be mindful of the message that the UC Davis students who plan these racist and hurtful events send to prospective students, current students, their families and the community as a whole.

Students planning and participating in this event should be trained to understand why these events are hurtful, offensive, and backward. Despite the years of progress that have been made by strides in the Chican@/Latin@ community at UC Davis, these racist actions remind us that there is still much work to be done. We urge UC Davis and the Coffeehouse to hold its student employees accountable for their actions and take appropriate and effective steps forward to ensure that these type of events will not take place again.

A letter from Adela de la Torre, Vice Chancellor of Student Affairs, stated, “Yesterday it was brought to my attention that a ‘Cinco de Drinko Sloshball’ Facebook event page was created by a group of UC Davis students. It encourages participants to wear stereotypical Mexican dress and depict images that debase the cultural identity of our Chican@/Latin@ students, staff and faculty. In addition, it has been scheduled during an important cultural period for our campus, La Raza Cultural Days, and a significant celebratory period for many Chican@/Mexican@ people, Cinco de Mayo.”

She would add, “Unfortunately, the insensitivity of this content has left many members of our UC Davis Chican@/Latin@ community feeling demeaned and demoralized. It is clear that the students’ actions are not aligned with our Principles of Community. As a teaching and learning environment, this is an opportunity to create a sustained dialogue about our distinct and diverse communities and to reaffirm our Principles of Community. Student Affairs staff will be working directly with the students who organized this event to heighten their cultural sensitivity and understanding of the impact of their actions.”

The students actions blew up the event. But some of the students did not seem to understand the fuss.

The Bee wrote this weekend, “Jonathan Beatty, one of the students wearing a sombrero during the protest, said he doesn’t think a drinking-themed party for Cinco de Mayo is racist, likening the holiday to St. Patrick’s Day festivities.”

Perhaps, but perhaps they have reason to be overly sensitive. It was a few years ago that the College Republicans had the great idea of having an event called “Capture the Flag on the Illegal Immigrant.”

Everyone wants to believe we live in a color-free society, and that’s fine to aspire to. But, as we have seen in the past week, we are not there yet.

220 thoughts on “The Ugly Veil of Racism Comes Back”