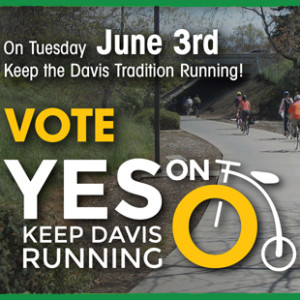 Daniel Parrella’s comment at Wednesday night’s forum may emerge as the most prescient and memorable comment from this campaign.

And, while Sheila Allen was correct that it is not true that “no one” trusts the government, Daniel Parrella’s point not only stands, but resonates. A number of others who, like Mr. Parrella, have spent considerable time canvassing and talking to the voters have told us that his perception is largely accurate.

This observation by Mr. Parrella and the other canvassers is simply tangible evidence to bolster our concern that Measure O’s campaign message does not match voter concerns. At the forum Daniel Parrella made the argument that he believes Measure O will still pass and is of the belief that any parcel tax in November is the one that is really in trouble.

Part of the Yes On Measure O message is that it is endorsed by a “Coalition We Trust,” but that message is cruelly juxtaposed against Daniel Parrella’s warning. While I may believe that the Davis City Council has taken steps to begin earning back public trust, the failure of the council to properly communicate the fiscal crisis before January has clearly left many citizens caught unaware … and in many cases angry.

And it goes down from there. The school board may have been in a better position of trust, as the point was made by Sheila Allen on Wednesday that the school board has been more transparent in their expenditure of funding than the city – but most of that public trust of the school board went out the window with the mishandling of the volleyball coach situation and the large expenditures of district funds on investigations.

The firefighters have been at the center of many city issues, particularly the 36% rate salary increase following the last sales tax, but also with regard to “3% at 50” enhanced public safety pension benefits and, of course, the “four on an engine” staffing that became almost unique to Davis until it was finally changed by the last council – accompanied by kicking and screaming by current and former government officials.  Many of the disaffected citizens who have talked to the canvassers have pointed at that that kicking and screaming is an example of why they don’t trust the government.

While the council finally did impose terms and conditions on the firefighters, as well as the Davis City Employees Association (DCEA), after going to impasse, we now see in a closed session item that, despite the due diligence on the part of the city negotiating team, staff and council, both bargaining groups have filed unfair labor practice complaints with PERB (Public Employment Relations Board), the body that overturned the last impasse with DCEA.

All of this leads to the question: why would anyone trust the Davis Professional Firefighters Association on city financial matters?  Why is that question relevant to Measure O?  Because the Firefighters are listed prominently in the Yes On Measure O literature as part of the “Coalition We Trust.”

The anger by the voters is understandable, but the Vanguard believes it is also misplaced. The major problems with unsustainable labor contracts go back 10 to 15 years. None of the people responsible for the unsustainable practices are still on the council.

It was only through the accidental innovation of GASB-45 (Governmental Accounting Standards Board, Statement 45) that the city learned that paying retiree health benefits as the bills come due would create a massive liability for the city by 2030 and the city had as much as a $60 million unfunded liability that it would need to address by paying tens of millions of dollars to fund OPEB before 2030.

On Wednesday, one of the candidates tried to argue that the city’s increased pension obligations were out of their hands, but that’s largely untrue. The city made this bed over the last 10 to 15 years by increasing the pension formulas without backfunding the cost increases, by taking on the employee shares of the pensions costs in addition to the city shares, and by failing to start to address this problem in 2009 – by creating a second tier, as well as by making sure that all employees paid their share.

More appalling is the suggestion that the fiscal crisis was simply a function of the economic collapse in 2008, as one candidate argued on Wednesday night. That ignores the numerous stories that the Vanguard published warning of the unsustainability of this situation as early as 2007. The 2008 city council campaign featured a debate between my wife Cecilia Escamilla Greenwald and incumbent Sue Greenwald (no relation), and incumbents Don Saylor and Stephen Souza.

The Saylor-Souza team would argue that we had a balanced budget with a 15 percent reserve. The two Greenwalds noted that this was an aberration, that in fact the city had massive unfunded liabilities, and was putting infrastructure maintenance into unfunded unmet needs categories, thus ignoring the need for roads and other infrastructure. The two Greenwalds argued that the city’s budget was unsustainable.

This council candidate debate occurred in April and May of 2008 and the economy didn’t collapse for another four or five months, in September 2008. The writing was on the wall, the only thing the economic collapse did was speed up the process and provide a catalyst.

The input from Mr. Parrella and the other canvassers, as well as discussions on the street and in community meetings, indicates that the recent public discussion unfortunately has focused on small ticket items such as the POU (Public Owned Utility) and some of the other city budget priorities. The public largely has not been engaged on the huge items: roads maintenance, buildings maintenance, retiree health, and pensions.

The public is also largely unaware of the efforts by the council in the last four years to deal with these imbalances.

The problem is that we are getting late in the game. The Yes On Measure O strategy works if the public is trusting of its government and simply needs to be informed as to what the tax is and where it goes. Unfortunately that trust appears to be in short supply, and any heavy lifting of a different, more trust-building message at this late hour seems problematic.

The city leadership is to blame here. The timing of Steve Pinkerton’s departure could not have been worse. Mayor Joe Krovoza and Mayor Pro Tem Dan Wolk are busy running for higher office, leaving their colleagues to pick up the slack, and their lack of clear direction and leadership is quite evident.

The irony, of course, is that the only way Olive Drive is going to be repaired is if the city can pass a parcel tax and it seems the only way that will happen is to rebuild the trust in the city. The problem is, how is that going to happen absent the funds?

If Measure O does not pass, the consequences will be catastrophic, not necessarily to the functioning of the city but, ironically enough, to the further erosion of public trust of  the city’s leadership.

32 thoughts on “Vanguard Analysis: Is Measure O in Trouble?”