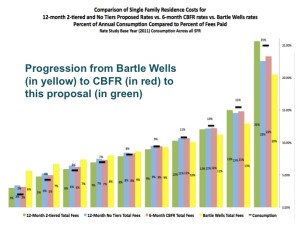 In yesterday’s article, we basically concluded that the assessment of whether to vote for Measure P should rest in the voters’ assessment of the risk. Based on what we have learned this week, the rates will change regardless of the outcome of Measure P.

Strangely then, Measure P is no longer about the rates, but rather about risk. Opponents of Measure P will argue that the passage will set up huge potential liabilities from $25 to $100 million and could put the entire project in jeopardy. Our assessment suggests those are worst case scenarios that can most likely be mitigated if the city quickly establishes a new rate process and enacts those rates within 90 to 120 days.

This piece sets out to respond and evaluate their claims.

They write, “It is indeed a project of which we can all be proud — both for how well it will serve our communities for at least the next four to five decades and for the transparent and deliberative processes involved in bringing it to fruition. Construction is now well underway.”

The interesting thing about transparency in the water project is that it has been inconsistent and, in fact, forced upon the council. We need to remember that in the fall of 2011, following the 3 am 4-1 council vote to implement the Prop 218 with the water rates back then, there was a citizen’s referendum that circulated and qualified to put the rates on the ballot.

That referendum ultimately forced the city council to pull back, rescind the rates on December 6, 2011 and send the process to the WAC. We need to remember that Stephen Souza actively opposed that referendum and, without the referendum, the WAC would have not done the work they did over the next 15 months or so leading to the March 2013 Measure I election.

So, if we had transparency there, it was forced upon and against the wishes of Mr. Souza.

Worse yet, there has been an utter lack of transparency in recent months as to the water rates. Apparently, unbeknownst to the public or even the city council, the city staff substantially modified those rates and we only found out about it because of the work of Councilmember Brett Lee who first inquired and then publicly asked the tough questions.

The op-ed continues. They write, “Unfortunately, Davis’ financing to pay for its share of that construction is not yet in place. Unlike Woodland, Davis has yet to obtain the bonds or loans necessary to fully pay for its $107 million share for the construction of the new water treatment facility.”

“Why is this so?” they ask. “The city of Davis was stopped in its tracks by Measure P when this initiative qualified for the ballot in January. If passed, this measure will revoke the approved water rate increases that went into effect last May. Davis’ water rates would then automatically revert to previous lower levels, which are insufficient to cover the costs of debt repayment of any loans.”

“Under these circumstances, no lender — whether for state revolving funds or for municipal revenue bonds — is likely to offer Davis any loans with favorable interest rates. For revenue bonds, water rates are the equivalent of collateral on the loan,” they continue. “Davis has not pursued financing for the next phase of construction because with Measure P threatening to disrupt the water rates, Davis would have had to seek out secondary markets for high-interest-rate junk bonds to finance the project. Consequently, the city has been waiting to see what happens with Measure P on Tuesday.”

This is largely correct.

They continue, “Whether Measure P passes or fails, after the election is over Davis cannot delay pursuing financing any longer even if it is forced to obtain financing at costly high interest rates.”

“Why? Davis currently has less than $16 million left of an initial $30 million revenue bond issued to pay for the surface water project. Scheduled project draws mean these funds will run out by October. Davis has contractual obligations to pay an additional $30 million in construction fees for October through December. City officials must begin the loan process immediately to have financing in place by then. Otherwise, Davis will incur payment failure penalties and take its first step on the road toward default.”

This is, of course, one view – again, a worst case scenario. The question is whether, if Measure P passes, the city can figure out a way through the 90 to 120 days.

They continue, “However, should Measure P be defeated, Davis will be able to begin seeking funding via A+ rated bonds, and our participation in this voter-approved project will move forward in an orderly, efficient and fiscally sound fashion. As previously noted, if Measure P should pass, it will take at least a three- or four-month process to put the required fiscally sound rates in place, with the scramble for financing beginning in the expensive junk bond market.”

There are a lot of questions here that we have to assess. What we have learned this week is that the rates are going to change regardless. Does that impact the bonding process? Is there any risk to continuing with rates that we know are going to change and a structure that was not presented in the Prop 218 notice?

The No on P folks respond to critics, “The supporters of Measure P have characterized as ‘scare tactics’ any suggestion that passage of Measure P could have serious financial consequences to Davis and its ratepayers. Nonsense! Long-term bonds or loans are like a mortgage. Any homeowner knows a small change in interest rate has a large impact on both monthly payments and debt repayment costs over 30 years — in our case, this could be as much as $100 million difference in costs to the ratepayers depending on which funding scenario and interest rate actually occurs.”

They continue, “It represents a high-risk financial gamble and creates chaotic governance. We must ask how any fiscally responsible voter can justify taking such high risks with their own and other ratepayers’ money that passage of Measure P represents.”

They argue, “In the last few months, the rhetoric and hyperbole directed at the approved water rate structure has created such confusion that too little attention has been paid to the high level of uncertainty that passage of Measure P would create for the Davis community.”

Here they step onto more uncertain grounds. First, as Brett Lee indicated in his comments, council has received a lot of feedback on the rates and the public is concerned. We can rightly criticize the council and city for failing to address citizen concerns before we arrived at this point.

However, any claims of hyperbole are undermined by acknowledgements, by council and staff, that the rate structure in place is not what we thought it was and that we have essentially thrown out the best elements of CBFR and kept in place the worst.

The authors continue, “At last Tuesday’s City Council meeting, in an effort to reduce the confusion and respond to citizen concerns, the members unanimously acted to change main features of the current rate structure that supporters of Measure P had argued were the reasons for putting it on the ballot — in particular, using a ‘look-back’ feature for the previous year’s water use as a factor in determining rates.”

While true, we learned a lot of more about what was happening – enough to suggest that people who are distrustful of local government have a sound basis for that distrust.

The authors then get political.

“With a commitment to this and other changes made by the City Council, ‘Yes on Measure P’ signs should be coming down all over town and its supporters urging a no vote if they truly were concerned about higher water rates. This, of course, has not happened,” they argue. “It is not surprising, because the core motivations for the proponents of Measure P have never been about rates and their fairness, but instead one more endeavor in a long line of attempts to delay or obstruct the surface water project through confusion and misinformation.”

It is always dangerous to pre-suppose motivation. I absolutely believe that there are some who have used the rates issue to attempt to kill the project. Those people have been now aided and abetted by the missteps of council and city staff.

But the aspersions here, remarkably, go beyond the leaders of Measure P to the citizens of Davis. 54% of Davis voters supported the surface water project, 46% opposed it. It was a split community that leaned to the supportive side.

But that doesn’t mean that the people now supporting Measure P are attempting to kill the water project.

It comes down to an assessment of risk. The worst-case scenario may play out, but again, the opponents of Measure P fail to assess several other factors.

First, neither Woodland nor Davis has an incentive to allow the project to collapse at this stage. That would hurt both sides. So we can talk about timelines, schedules, and fees all we want, but while the No on Measure P folks have a duty to present the doomsday scenario, the public officials have an equal duty to find ways to avoid that.

Second, Measure P now comes down to mitigation of risk. The rates have to change regardless of the outcome. The question is whether voting no or voting yes carries the biggest risk.

Third, the issue of trust enters the picture. The question that voters have to ask is whether they trust council to get this right. That’s a tough question, perhaps even unfair.

But I have a fourth question – council established the yearly check-in, but it seems that staff at some point went through and made major revisions to the rates without consulting council or the public. Who made that call and when was it made?

Finally I’m disturbed at the insinuation that the voters who have Measure P signs on their lawns are simply and only trying to kill the project rather than being concerned with the rates and now the process by which the rates were enacted.

2 thoughts on “Analysis: Assessing the Risk of Measure P”