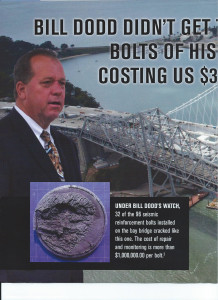 It is probably impossible to remember that as recently as three weeks ago this race seemed unusually quiet. Our article was dated May 8 and entitled “Union Independent Expenditures About to Shake Up Assembly Race.”

At that time, Dan Wolk was running third in money but performing strongly with endorsements on the eastern side of the district. Where they stand now is more difficult to assess after the Independent Expenditures hit.

The tally was more than $1 million in Independent Expenditures, almost all since the beginning of May.

A check at Cal-Access, the state website  on campaign financial information, revealed both sides have been pouring in tremendous amounts of money.

The Opportunity PAC, made up of various unions, which has been criticized by the Vanguard for making false attacks against Bill Dodd, has spent nearly $300,000 in opposition to Bill Dodd. It has another $185,000 in support of Dan Wolk.

The FairPAC, made up of conservative-leaning organizations, has expended $182,500 in support of Bill Dodd and another $172,500 in opposition to Dan Wolk.

The question is how effective are those mailers? We have only seen the one against Dan Wolk – the flip-flop mailer, filled with distortions and inaccuracies. We have seen at least six attacking Bill Dodd. There may be more on the western side of the district.

There have been two themes of attacks. The first that Bill Dodd took a pay raise and increased taxes – this first contention is accurate, although the pay raise was approved through a county ordinance linking supervisor pay to judges’ pay increases. The second is inaccurate, as he voted to impose a new tax that replaced an old tax at the same rate.

The second theme of the attacks is that Bill Dodd was responsible for the faulty bolts on the Bay Bridge – an absurd contention that was inaccurate. While he chaired the MTC (Metropolitan Transportation Commission), they had no authority over bolts and other materials – that was CalTrans’ call and CalTrans’ error.

Between media coverage and letters to the editor, those attacks have been debunked. The question is how many people read the media accounts versus how many saw the attack pieces through the daily bombardment of campaign literature.

This is a Democratic district, but the registration breakdown makes it at least interesting. The registration is 45.8 percent Democratic, 26.1 percent Republican and 25.7 percent Independent. In 2008, Obama won this district 64.8 to 32.2 over McCain.  Prop 8 failed 55-42.  Governor Brown won handily, 57-36 over Meg Whitman.

In terms of population, Napa and Yolo Counties are the two largest in the district, as those two counties remain most intact.  In terms of registration numbers, Napa County voters represent 30 percent of the registered voters, Yolo County represents 33 percent, then Lake at 15 percent, Sonoma at 14 percent, Solano only 7 percent and Colusa just 1 percent.

The top two candidates tomorrow will face off in November, regardless of their vote share.

Here’s how we see it:

Bill Dodd: We really see no scenario where Bill Dodd doesn’t finish in the top two and, really, most likely a distant first. He was the top fundraiser, and he cleaned up on endorsements in several of the western counties. A moderate Democrat, and a former Republican, he clearly takes advantage of the open primary because he can pick off both moderate Democrats and some Republicans.

A lot of the Republican money went toward him. And while he is at a disadvantage in the west, he did get key endorsements from Republican Supervisors Matt Rexroad and Duane Chamberlain.

We feel pretty safe in predicting he’ll be there in November.

Dan Wolk: We are going to put Dan Wolk by a nose over Charlie Schaupp. But it’s a very close call and if Bill Dodd can break 30%, we may well be wrong here depending on who shows up at the polls.

Dan Wolk has two real advantages in this race. First, he has the name recognition in the western part of the District. He really cleaned up on the endorsements in Yolo County, but unlike in previous elections, he has to split Yolo County with at least Joe Krovoza and that waters down his strength.

Even with that strength, he was going nowhere in this race – or so it appeared – until the unions kicked in the money. The big money came in the form of nearly half a million from the Opportunity PAC.

But he also got over $100 thousand from SEIU in Independent Expenditures, not to mention $35,000 from the California Professional Firefighters IE PAC. He made an interesting transformation during his time on the Davis City Council. In June 2011, he cast the deciding vote to reduce employee compensation by $2.5 million.

But since then he has been working hard to curry favor with the union – opposing fire staffing reduction, flipping on the shared management service with UC Davis after his mother, Senator Lois Wolk, co-signed a letter in opposition, but from our sources, it was his dressing down former City Manager Steve Pinkerton earlier this year that won him the support of fire.

Right now, we have Dan Wolk on the strength of that late money in second by a nose.

Charlie Schaupp: Charlie Schaupp is a veteran Republican campaigner. His money hasn’t come in, in part because of Bill Dodd. But he is listed as a Republican, and the only really legitimate Republican candidate. In a district that has 26% of voters as Republicans, if he polls about 25% of the vote, he could well finish in second. If he does, it’s a Dodd-Schaupp November race where the Democrats will line up behind Bill Dodd and give Mr. Dodd a comfortable win. A Dodd-Wolk match up will provoke another war of PACs and probably $2 million in Independent Expenditures.

Joe Krovoza: Joe Krovoza has run a solid, clean race. He has raised over $300,000. He has earned the endorsement of environmental groups as well as four key newspapers: Santa Rosa Press Democrat, Woodland Daily Democrat, Davis Enterprise, and the Sacramento Bee. The problem is that we don’t see his niche in this race. Bill Dodd will get most of the moderates and some Republicans, Dan Wolk will get mainstream Democrats who follow the party selection and support the unions.

Joe Krovoza’s legacy on the city council is fiscal discipline and he was instrumental in changing the way Davis’ City Council operates, particularly on the fiscal side. However, his mannerisms may have rubbed his colleagues the wrong way, as each of them endorsed Dan Wolk.

Joe Krovoza has managed to stay out of the fray, but part of the reason he did that is that neither the right nor the left saw him as a threat.

His best bet to carve out a niche is to build a coalition of environmental voters, voters who are ticked off by the negativity surrounding Bill Dodd and Dan Wolk, and those who respect his record as mayor. His campaign has focused on a grassroots effort and he believes they are flying below the radar.

While all of that is possible, we see him on the outside looking in and staring a fourth place finish in the face.

Dustin McCall: A lot of people believe that once Charlie Schaupp entered the race, someone put Mr. McCall up to running. He is a legislative staffer and a part-time student at UC Davis. He will finish a distant fifth.

11 thoughts on “Analysis: Where Does the Assembly Race Stand?”