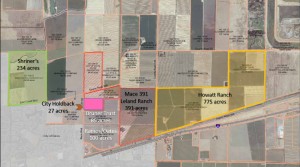 Most of us agree that previous City Councils made big mistakes over-expanding and over-compensating city labor, then failing to tackle bloated labor costs and moving money between accounts to hide the extent of the problems.  Then these problems were exacerbated by similar mistakes and moves by state government: reducing payments to cities to pay for the state’s bloated labor costs.   These prior mistakes are the primary reasons that Davis required another sales tax increase, and currently faces more than $50 million in unfunded road and building maintenance expense.

But few Davisites probably know of the most recent big “Mace 391” mistake made by our current council.

Mace 391 is a 391-acre parcel previously named Leland Ranch.  The bank foreclosed on this land and it was subsequently purchased by the city in July 2011 using $1.3M in Measure O (the City’s Open Space Protection Special Tax Fund) plus $2.4M of our very inadequate city road maintenance funds.  City staff then worked with the Yolo Land Trust, a private non-profit with a single mission to preserve open space and farmland in Yolo Country.  The Yolo Land Trust applied for and was awarded a $1.1 million grant from the USDA Natural Resources Conversation Services (NRCS) Farm and Ranch Land Protection Program.  In June 2013, the Council approved resale of the property with a permanent conservation easement.

Prior to the City Council decision to place Mace 391 into a permanent agriculture easement (and sell it at half million dollar loss), the Davis business community came forward to ask Council to pause and assess the cost-benefit for using the land as an innovation business park.  The open space people complained that the business community previously never expressed interest in this land for a business park.  The business community responded with three points: one – there was little effort by the city to engage the business community about the use of the land; two – the extent of our city’s fiscal problems were unknown/undisclosed until recently and there was less understanding of the need for local economic development to generate revenue for the city; and three – UCD had recently ramped-up programs and strategies to better collaborate with private research and development  business requiring commercial-zoned land in and around Davis.

Despite the complaints by the open space people, the Davis City Council voted 4-1 to pause and debate the use of the 391-acre Leland Ranch.  The wheels of economic development progress started turning, but too slow to overcome the energy of the very committed open space people.  As the deadline for the NRCS grant approached, the open space people pulled a special card.  They claimed that the beloved Yolo Land Trust would be harmed as a future NRCS grant recipient if the City rejected the $1.1 million grant.  They even presented a NRCS employee to confirm the claim… a claim would later be proven to be entirely false as the NRCS grant process is highly statistical, and primarily because of Davis and Measure O funds, the Yolo Land Trust’s benchmarks would remain at the top even after losing the Mace 391 grant.  But the perception damage was done (or the cover was provided), and the Council voted 5-0 to put Mace-391 into permanent agriculture easement.

We know what the city gained by this Council decision: Davis has added 391 additional acres to our existing 2,500 acres of preserved open space in and around Davis.  Also, the Yolo Land trust gained another 391 acres of preserved land to their existing portfolio of 5000 acres throughout Yolo County.   But what did Davis lose?

To answer that question we need to assess the opportunity cost of the alternative using this city-owned land to develop a business innovation park.

Opportunity-cost is simply the net value of an opportunity not pursued.  Every decision can be evaluated in a cost-benefit analysis.  There are both intangible (I like or don’t like the way it looks) and tangible (it costs or is worth X dollars) costs and benefits.

First let’s be clear that it is impossible to develop definitive estimates of the total opportunity of something as potentially variable as a new business park.  The process to develop a business park generally begins with a project to complete a park design and then to install the infrastructure.  For any business innovation park in Davis, UCD would play a leadership role attracting the types of businesses that would benefit from close proximity to the campus.   Next, the various lots are listed for sale of for lease, and professionals in the commercial real estate, commercial mortgage banking, and business economic development industries, all start marketing and attracting prospective companies.   Developable Lots are acquired and the business facilities are constructed.  Generally within a year or two after business acquires the lot the employees start working onsite.

Nobody can know which businesses would eventually locate here, and hence it is impossible to calculate a specific total local economic impact.  However, we can make reasonable estimates with assumptions based on the results of other similar technology and innovation business parks throughout the nation.

One key point here is that the city of Davis owned this land.  It was acquired primarily from monies out of our general fund.  We can cut through much debate about the intangible costs and benefits with a straightforward acknowledgement that the city would have completely controlled the design and development of a business innovation park at Mace 391.  All the conflict about bike and pedestrian connections, visual mitigation, landscaping, density, building design, etc., etc., all of this would have been City-controlled and citizen-driven.  Contrast that to a situation where a developer owns the land and will fight for maximum profit, and clearly we let a big pile of intangible opportunity slip away.

But what about the tangible (monetary) opportunity cost?

The 10 year build out of a Mace 391 Business Innovation Park would have resulted in range of $50-$90 million dollars in monetary value to the city.  That’s right!  At a time that we knew we were bleeding red ink and headed toward broken roads and crumbling buildings, our City Council sold a city-owned asset valued at $50-$90 million in monetary value for a $500,000 loss.   How do we arrive at that total opportunity cost valuation?

From research done by the Association of University Research Parks (AURP), there are approximately 200 university research parks in the nation.  They average 532 acres in size; contain an average of 41 separate companies employing an average of 3,339 employees

AURP publishes economic impact studies on some of these research parks.  Although each of these analyses are unique, they tend to use a common set of criteria to derive both direct and indirect economic impacts.

Direct economic impacts derive from both the construction phase, and from the long-term, ongoing, operations of the company.  They include: sales taxes, income taxes, realty transfer taxes, motor fuel taxes, gas taxes, vehicle licenses and fees, telecommunication and electricity excise taxes, property taxes and other State and County revenues supported by the operations of the company.  These are basically all the city tax and fee revenue increases that would derive from the development and operation of  business innovation park over the first 10 years.

Indirect, or secondary, economic impacts include:

Mace 391, like any other future business, research or innovation park, would have resulted in a similar set of direct and secondary economic benefits.   Based on these study comparisons, the 10 year estimate of these direct and indirect monetary benefits to the city is $20 million.

In addition, since the city owned the Mace 391 land, we would have benefited from the sale or lease of the land to a developer, or alternatively from the sale of the individual lots had we decided to develop the park ourselves.

Considering 200 acres of develop-able land out of 391, the wholesale value would be $150,000 per acre ($30 million) to a developer.  Note that this value is discounted because of the sales contract clauses to cover all Davis covenants, codes, restrictions and amenities… and to fund most of the city infrastructure build out.  The retail sales value of Davis-developed ready-to-build lots and sold to individual business owners would be $500,00 per acre ($100 million), but at a cost of about $30 million to develop the infrastructure and lots including all the amenities…. or net $70 million.

This real estate valuation is based on current comparable commercial property for sale in and around Davis.

So there you have it.   Our City Council sold, for a $500,000 loss, a city-owned asset worth $50-$90 million.  They did this at a time when they knew we are facing a road maintenance deficit of almost exactly the same.   This was a giant mistake.

There is an important question to ponder when voting for yet another tax increase to cover all of these mistakes by government:  how do we prevent them from happening again?

More importantly, how do we force the focus to be on long-term fiscal stability rather than moving from fiscal crisis to fiscal crisis?

Davis generates about 30% of the business tax and fee revenue as does the average comparable city.   We are out of whack.   There is simply no way we can continue to afford our demanded city lifestyle and amenities unless we grow our local economy.  We can certainly meet each fiscal crisis and agree to keep taxing ourselves at a higher and higher rate, but at some point we will say no.  And then what?  And what burden will our children have to bare funding city operations from a high percentage of their personal wages and earnings?

It is clear that Mace 391 will loom as an epic mistake by this City Council.  It was a once-in-a-lifetime city opportunity to jump-start our economic growth and fill our depleted and inadequate city coffers.   It is comparable to all the fiscal mistakes made by previous City Councils; but more glaring given the lack of Great Recession excuse.   We knew our fiscal problems, and we knew the opportunity cost of not pushing to develop Mace 391 into a world-class, Davis-owned and designed, Business Innovation Park.  Our Council knew these things and yet they did not act in the best interests of the majority residents of this great city.

The open space people claim that Mace 391 would have never passed a Measure J vote.   I have more faith in the intellect of the average Davis voter to weigh the costs and benefits in light of our recently disclosed fiscal problems, and the fact that we would end up with a true Davis-designed park.

I think the City Council got the Mace 391 decision terribly wrong.   I think they let us all down.  Let’s hope the new City Council gets it right going forward.  I remain very skeptical.

55 thoughts on “Another Giant Council Mistake?”