The city’s RFEI (Request for Expressions of Interest) process yielded three proposals in documents released by the city late Monday evening. There were two proposals that were expected – the Ramos, Oates, Bruner group at Mace 200 and the Hines-SKK Developments north of Sutter Davis Hospital.

This is the first of three proposals – Mace 200.

The Mace Innovation Center, the developers write in their RFEI proposal, “is intended to be an area where leading-edge anchor institutions and local to international companies cluster and connect with start-ups, businesses incu­bators, and accelerators as well as the University of California at Davis. It will incorporate sustainable design features including LEED building standards and will be walkable, bike and transit-accessible, and technically-wired. The Park will offer a mix of building types and uses including office, light man­ufacturing, research and development, flex space and support retail. It will also include support uses such as recreation facilities and may include uses such as lodging and a conference center.” 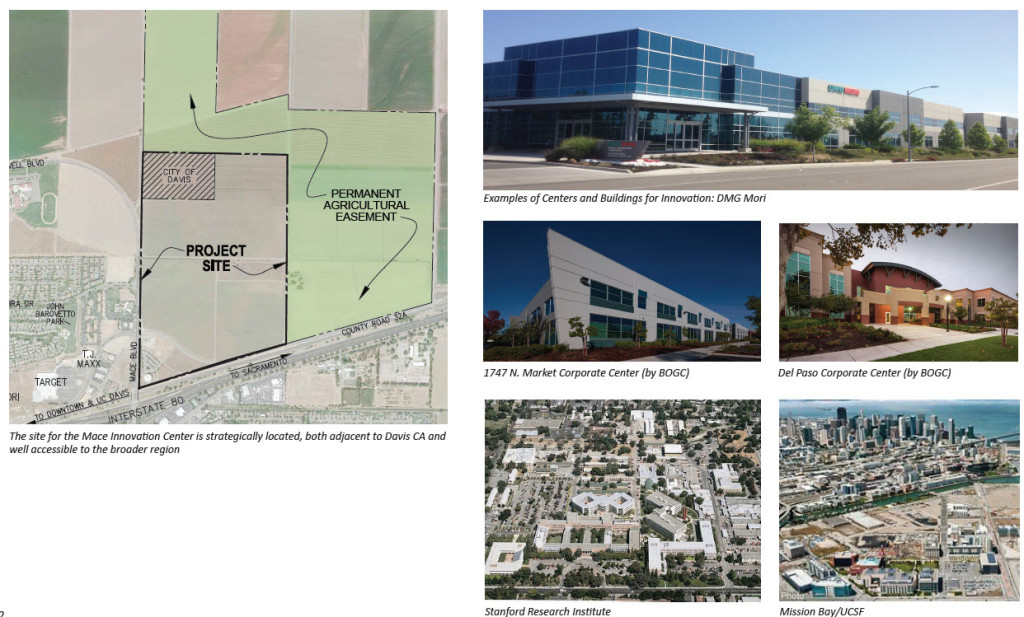 They add, “It is intended that a ‘Business Park’ be functionally and aesthetically integrated into the community and not provide commercial uses that are encouraged in the downtown and neighborhood centers.”

“Phasing the project over time will allow for a strong initial first phase that may be at a lower FAR, but then provide higher density in later phases to create the desired FAR,” they write. “In later phases the plan will look to create opportunities to densify existing built areas, including utilizing parking structures to free up land for additional development.”

“The Project is to deliver office/corporate spaces that are highly flexible and technologically advanced. They will include new collaborative spaces/flex spaces/dry and wet labs,” the Mace developers note. “There will be space developed for Research/Incubators start-ups who may be subsidiaries of larger and more established companies in Davis, Sacramento, or even the Bay Area. Programs envisioned in the Project are scientific, technical and research focused. UC Davis spin-off research/internships are potential and targeted programs.”

They continue, “The site, given its size and location, is suitable for research programs for green technology and sustainable agricultural research. The Project intends to include potential hotel/conference center, associated retail, and other amenities for employees and visitors to the site.”

They anticipate significant LEED (Silver and Gold building standards) as well as net-zero energy goals which would include solar panels, building technology for energy efficiency, grey-water systems, natural daylight and the promotion of water conservation.

In addition, “The intent of the Project is to incorporate a multitude of Transportation Demand Management (TDM) strategies such as carpooling, bus transit, shuttles, car share, and other smart phone technologies to assist in providing transportation options for employees.” 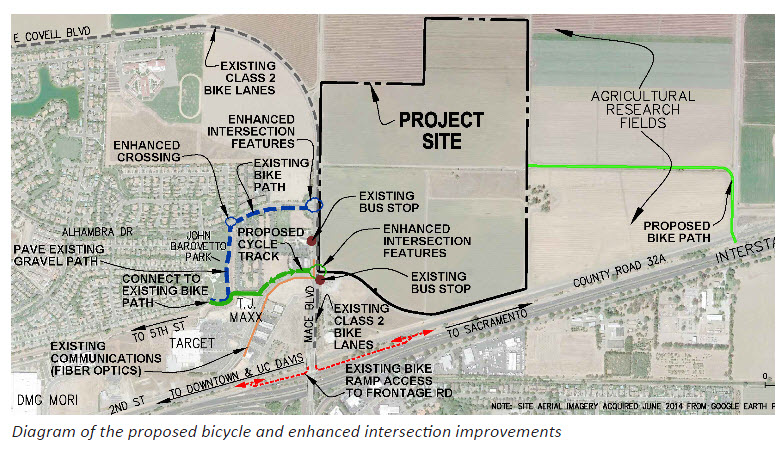 The project offers options for densification over time, “As the Project grows higher densities will be achieved. Selected parking areas to be converted to parking structures over time to allow for more buildings that will result in higher densities. There will be a focus on establishing higher density areas closer to the highway to allow for greater accessibility from Interstate 80 and the City.”

The applicant notes, “The applicant has submitted a request to the City to consider a ballot measure that would acceler­ate the Measure R vote for this non-residential project to the beginning of the entitlement process.”

They add that they acknowledge the “community’s desire for no residential land to be included.” They write, “The applicant has actively participated over the last three years in the community planning process known as “Peripheral Innovation Task Force.” Through this planning process – the community’s desire not to have residential development as part of an Innovation Center was clearly stated and docu­mented. The applicant respects this desire and is committed to honoring the desire for no residential development in Peripheral Innovation Park Developments.”

“The Mace Innovation Center is strategically positioned at the Mace Boulevard Gateway to the City of Davis (City). The location of the Project effectively extends the growing 2nd Street technology corri­dor, which has emerged over the past 10 to 15 years, based on both University of California (UC) Davis influences, as well as other factors, including the quality of life in the City,” the applicants write.

With regards to employment, “Total employment at the site could therefore range from 5,600 to 9,000 persons over a period of 15 to 20 years as the project is phased in. Many of these jobs likely will be of very high quality, demonstrat­ing average wages well above regional norms for business parks, with average salaries potentially in the range of $60,000 to $120,000.”

They discuss the economic multiplier impacts, as well. “The primary economic impact of the Project derives from its local and regional spending of employees. As employees purchase goods and services in the City and Yolo County, a ‘ripple’ effect will occur as local businesses expand and hire new workers and generate successive rounds of spending. These pri­mary economic impacts can be quantified using input-output analysis, based on economic multipliers that quantify ‘direct,’ ‘indirect,’ and ‘induced’ effects on local and regional output and employment.”

The developers project generating “property tax revenues accruing to the General Fund ranging from 1.0 to $1.5 million annually to provide net new funding for public safety, road maintenance and other es­sential services. Property tax revenues could range from $2.0 to $4.0 million if the project is extraor­dinarily successful at attracting top users. In the same regard, the project could produce an estimat­ed $150,000 to $850,000 in annual sales tax revenues for the City’s General Fund, with the high end revenue assumption assuming the successful attraction of top users.”

“The Project’s contributions in this regard will include job and intern opportunities for local residents and synergies with UC Davis programs and initiatives, including technology transfer and spin-off of firms developing new technological procedures, products or services. This activity will feed many of the ongoing initiatives and programs actively developing in Davis and the larger area (e.g., Davis Roots, a business incubator in Downtown Davis),” they write. “Overall the Project will enhance Davis’ image, facilitate greater success in economic devel­opment efforts, support entrepreneurship, and create additional opportunities for investment in the community.”