The Davis City Council met on Tuesday night for a lengthy parcel tax study session. It was an interesting configuration, with Rochelle Swanson absent from the meeting due to previous obligations and Joe Krovoza attending one of his final meetings on the subject before he is replaced on July 1 by Robb Davis, who will end up being the decision maker on this issue.

The council received a full report from city staff on issues of potential tax measures, amount and duration, debt financing versus pay-as-you-go, timing and use of mail ballots, specific projects and process.

According to city staff, the council must be unanimous in putting a tax measure on the ballot. The council clearly had different ideas on the type of tax that was preferable. Mayor Pro Tem Dan Wolk strongly argued to include $10 million for refurbishing Community Pool, backed by advocates from the public. However, Brett Lee was adamantly against funding the pool now and the rest of the council saw roads as the first and foremost priority.

The council appears to continue to favor some sort of version of what they are calling the B-Modified approach, which seeks $25 million in the first two years with variable revenues over the next 20 years of construction for a total cost of a non-adjusted $246 million over that time.

The B-Modified version is $25 million up front and more money per year than the other options, Mayor Krovoza pointed out. Some of the parcel tax would need to be sufficient to meet not only the bonding, but the yearly expenditures. B-Mod takes the city’s PCI from 57 upwards toward 63.

Under Option 2 the PCI goes from 57 to 35. As Mayor Krovoza noted, “That represents a precipitous drop in the level of road condition.”

City Public Works Director Bob Clarke noted, “What that really represents is we have a great deal of pavement that’s on the verge of falling into a poor condition that we would like to prevent. That’s why we discussed last year the benefit of an upfront infusion to stave off that.”

Financial Adviser Mark Northcross said there is a key tension in setting the bond rates. First, you have to be conservative “because the last thing you want to do is not be able to deliver what you said you would deliver. So how do you be conservative when you are talking about a parcel tax?”  He answered that saying that you are conservative in the interest rate you assume and investors want to see coverage – the maximum tax levy should be greater than the annual debt service.

If you want $25 million and are only going out ten years, you set your tax rate to $3.3 million per year. That drops to $2.1 million for 20 years and $1.7 million for a 30-year term. “The impact on the taxpayer is lower on an annual basis if they’re willing to pay the tax for a longer period of time,” he explained.

But Mr. Northcross also warned that they need to think in terms of the useful life of the roads, which is not going to last 30 years. “When you get back to paving, the useful life of repaving a street is not 30 years,” he said. Instead you are looking at ten to twenty years rather than 30.

During public comments, Jose Granda, who nominally headed the opposition to Measure O, warned the council against trying to implement another tax. “I was campaigning against Measure O, I saw what the sense of people are, they are tired of these things,” he said. “They are angry. Measure O is great for us. We have gotten many phone calls, emails, of people who are angry that you are considering another tax, when you already passed Measure O.”

He pointed that Measure O had 42% opposition and “with 42% when you need two-thirds, you don’t have a chance to pass the measure.”

But Dave Owen, President of DCEA spoke passionately in favor of the tax. He told council, “I stood by for years and watched previous administrations and previous councils cook the books. I’m guilty. I’m not alone. But now we have to fix it.”

He noted that on his tax bill there is a $300 discrepancy between what he pays the school district and the city. “You come to me and you ask me, make up the difference Dave, make up the difference in the taxes, that’s $200 per year, if your math holds in four years that’s about $50 million. That’s not a loan. That’s not a bond. It’s cash money on a barrel head, you can spend that,” he stated.

“Pin it to the pavement,” he continued. “All your dream list, that’s real nice, but it will die on the vine when you take it to the vote. The pavement is basic infrastructure… people use it every day.”

He said for most people that’s three cups of coffee a week, for him it’s three beers, “But I can forgo that if that’s what it takes to make up for what we did over a period of years, which was kick the can down the road. We knew it. But now it’s time to pay. There is no easy answer here.”

“Unless you’re walking around in a daze, you know that your streets and sidewalks, in many areas in town, suck. That’s just how it is,” he added.

Elaine Roberts Musser added, “The consumer is interested in fixing the roads because that’s what they can see physically is wrong. If you go down any road in Davis you can see the mess on the road.” She added, “I think most people would get on board with fixing the pools, I think you can sell the pools because fixing what’s already broke is putting a band aid on a big problem.”

“But after (irrigation) you have a problem,” she stated. “I think if you start talking about things like dog parks, and fountains and things like that, that’s just not going to work. It will never sell.”

The city acknowledged that they were conducting polling on the parcel tax and also the community’s view of the effectiveness of the city and city programs. They are hoping that the results will be available in time to inform council’s decision on the taxes in a few weeks.

Councilmember Brett Lee suggested that, while the city is looking at a November revenue measure, he might be interested in addressing the pool in the spring. He suggested that would give them time to make the case to the broader community about the benefits of the pool.

“We are talking about a parcel tax or some sort of revenue measure,” he said. “I think it would be a little bit rushed to try to go before the voters with sort of a grab bag full of a variety of projects that haven’t been fully vetted.”

He was open as to the specific form of revenue and whether they should attempt to bond or go pay-go.

Dan Wolk, however, was very supportive of roads, but also felt the pool was critical.

“The need to invest in our roads and sidewalks is clear,” he said. “I think we need to do that sooner rather than later because as we talked about the cost increase exponentially essentially.”

“I do agree that there are items on this list of parks facilities that are nice, but they are things that I don’t think are as critical as others,” he continued. “I think I’m willing to go without some of these.”

“However, I do believe that the funding of a pool is critical,” he stated. “I think it’s clear that just as with our roads, the longer we wait on that the greater our cost becomes in terms of our band aid measures that we’ll have to put on the pools.”

“It’s clear that we’re going to have to invest $7 million on these to refurbish civic and community (pool),” he added. “There’s a strong argument to make… that we really need to re-invest in our parks facilities and specifically our community pool. I think that’s really critical to the heart of this community as much as anything. I think this is a community that is willing to support that – even at a two-thirds level.”

Councilmember Lucas Frerichs stated, “I’m still undecided where I’m at on this item. Roads are definitely what I’m most leaning towards.” He said that he wants to see the polling data, but “November seems attractive primarily due to the higher increased turnout. I think there’s a potential risk in a special election all-mail ballot due to lower voter turnout.”

He also suggested looking a Transit Occupancy Tax in 2016 which would work in conjunction with projects like the Hotel Conference center and will primarily hit people coming from out of town rather than residents of Davis.

Councilmember Brett Lee, while stating that he and Mayor Pro Tem Wolk were pretty close, believed a six-month delay for the pools tax would be preferable. “This idea that we’ll do roads plus swimming pool, I’m not sure … everyone else is sort of left to fight for themselves for the next few years,” he stated.

He added, “It’s nice to split the need to have versus nice to have. Road and sidewalk – need to have. Swimming pool upgraded facility – that’s a nice to have. That’s not a bad thing. Davis is a community that people pay a premium to live here.” People are willing to pay for amenities, “So just because pools are a nice to have doesn’t mean that’s less important.”

“Standing at the Measure O booth, I think there needs to be a lot more groundwork for convincing people of the nice to have,” he added.

Dan Wolk did not see it that way, however.

“Obviously the roads and bike (paths) and sidewalks are need to have items,” the Mayor Pro Tem stated. “I guess I just don’t see our pools as sort of these niceties that we have in our community. I see them as critical infrastructure. I’m just trying to imagine a community that lacks a civic pool and a community pool.”

The study session, while informative, was a bit incomplete without the voices of Rochelle Swanson and Robb Davis, who on July 1 will potentially be deciding a critical portion of the future of our community. The unanimity issue on the parcel tax could potentially make for some interesting horsetrading.

Here are critical graphics from the study session: 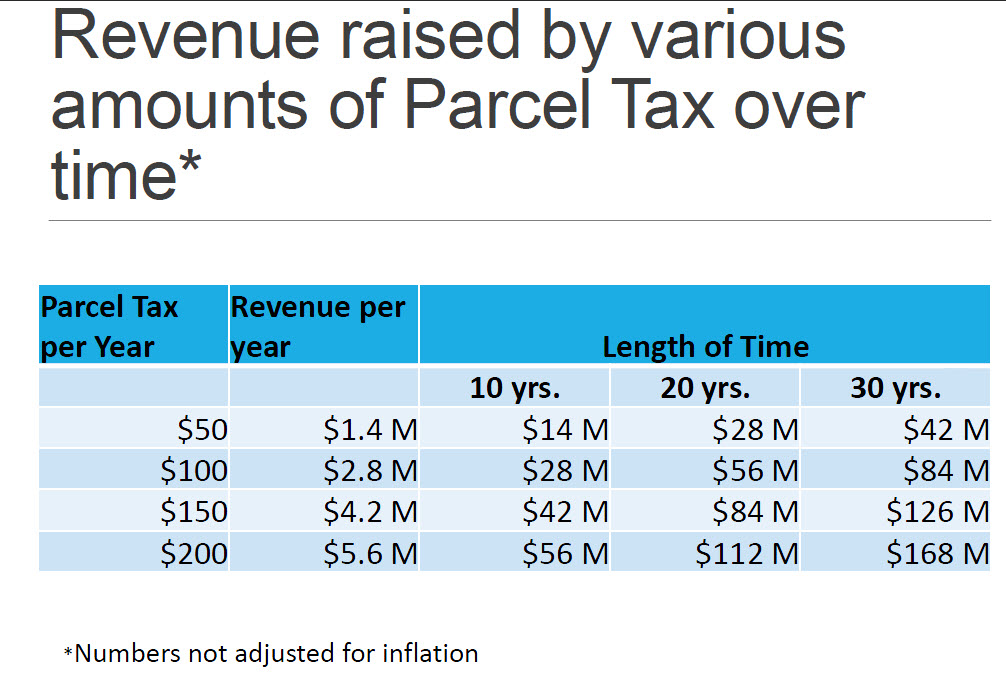 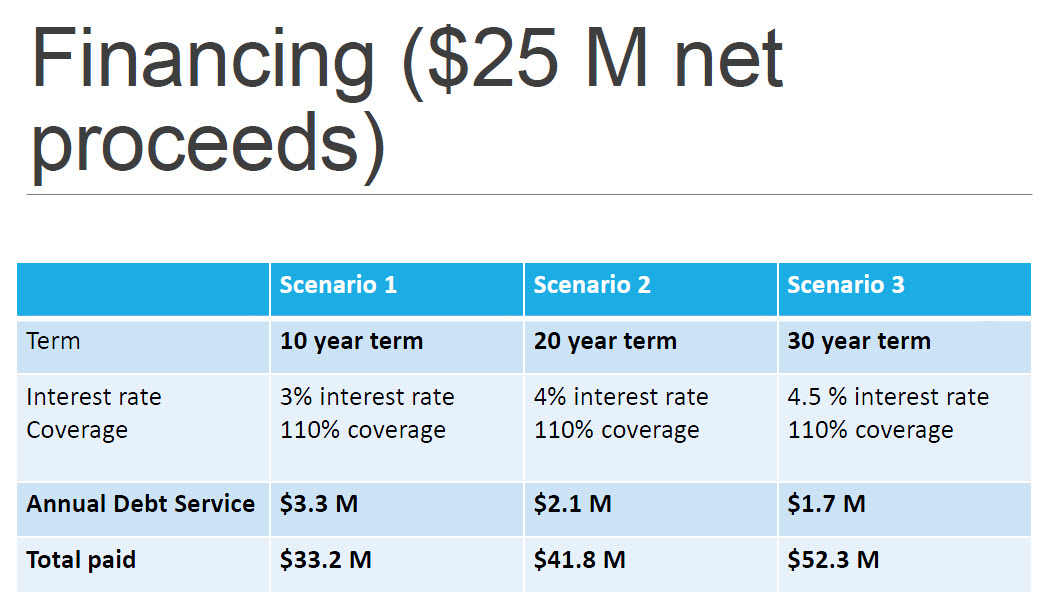 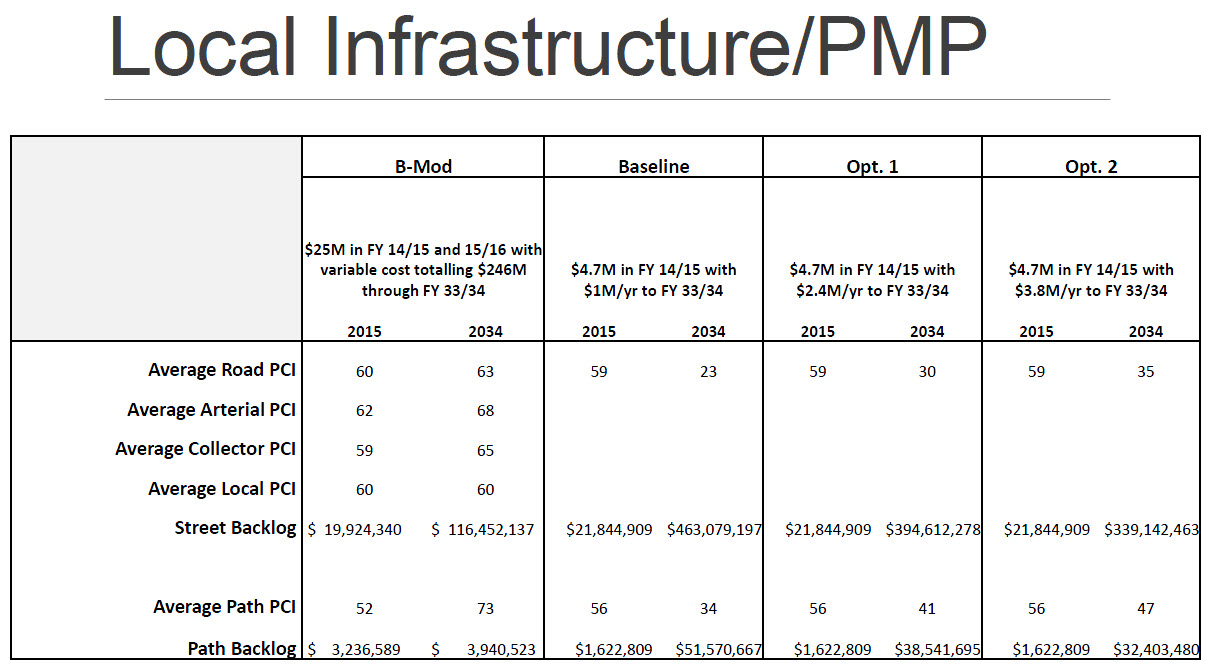 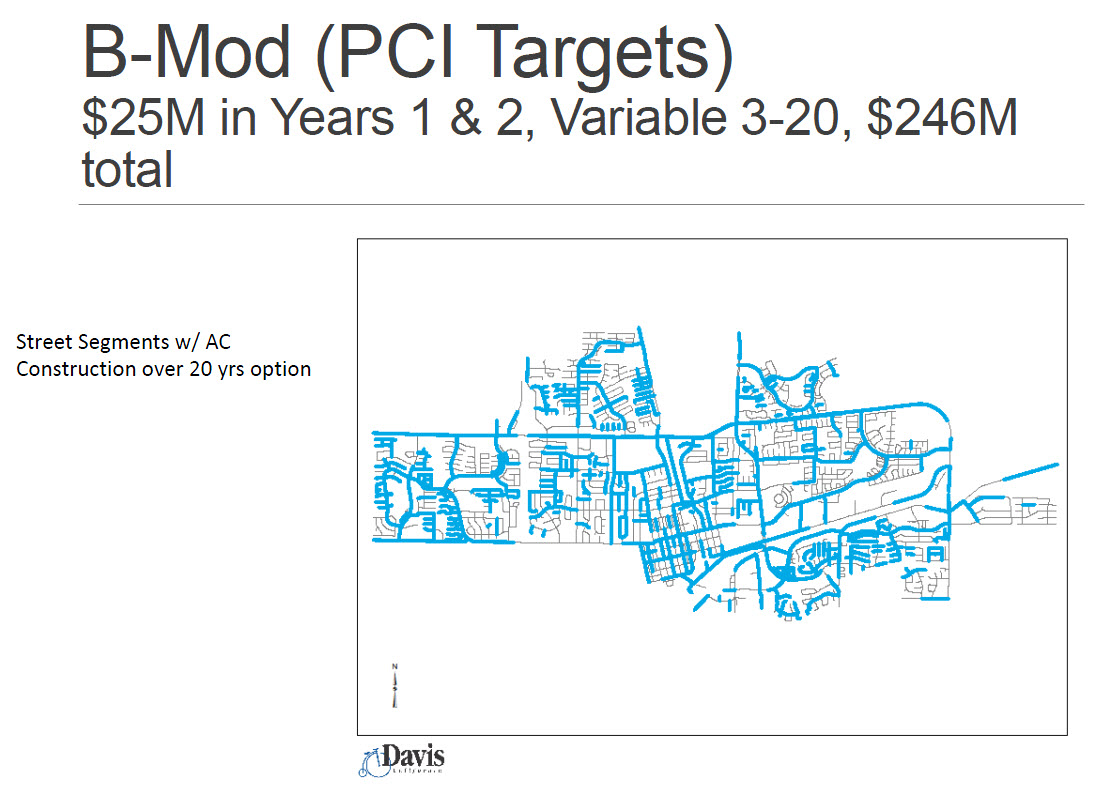 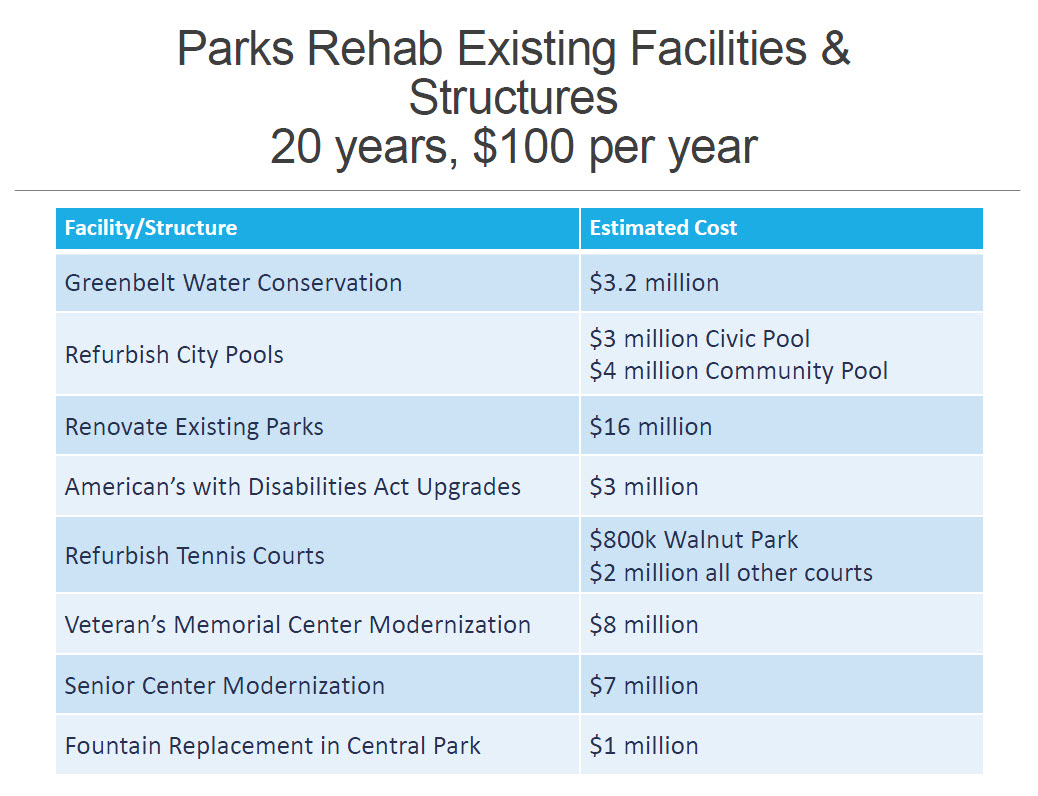 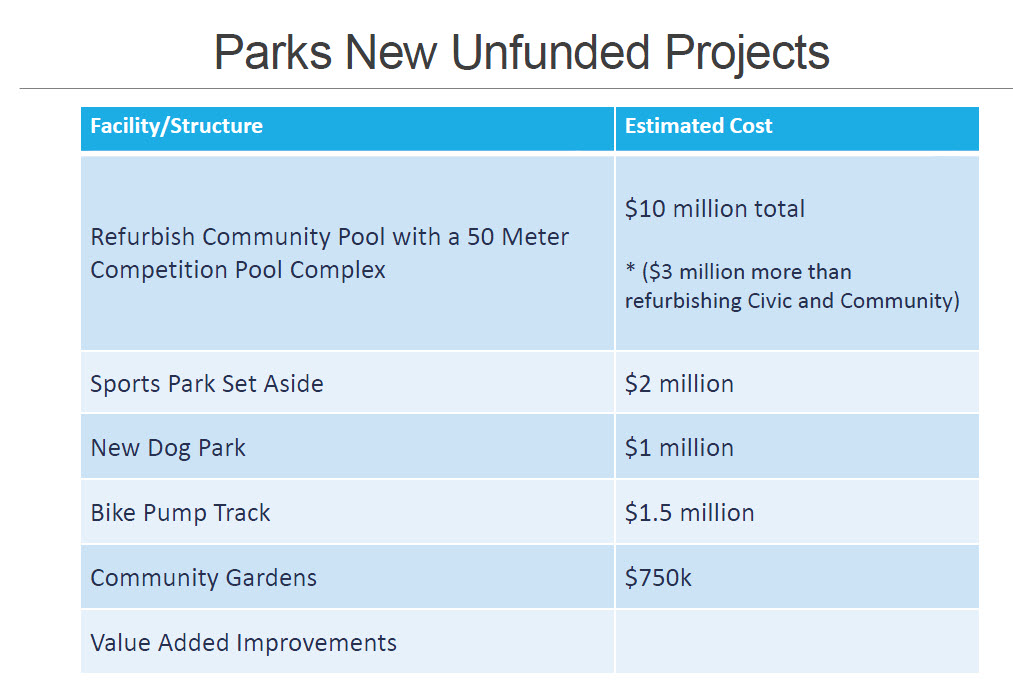