With 100% of the precincts reporting, one thing is clear, Robb Davis finished first and will be the Mayor Pro Tem on the Council starting July 1, 2014 and Mayor of Davis starting in 2016. Mr. Davis led Rochelle Swanson by just under 800 votes.

Robb Davis won all but six precincts, and finished in the top 2 in all but the easternmost precinct in South Davis, where he finished third.

The battle for the second seat is much closer. Rochelle Swanson, who trailed after the initial absentee ballots, built a 213 vote lead over John Munn. Sheila Allen finished a distant fourth and Daniel Parrella an even more distant fifth.

Mr. Munn issued a statement to Rochelle Swanson indicating that he has been told “there are still about 3,000 ballots to be counted.“ This was unconfirmed, but he stated, “I want to check on this tomorrow.  If there really are a large number of uncounted ballots, I think the wisest course is to allow the counting to be completed before conceding the election.  This is not to prolong an already long campaign, but simply to confirm the outcome of a relatively close race.”

The Vanguard will check into this in the morning. 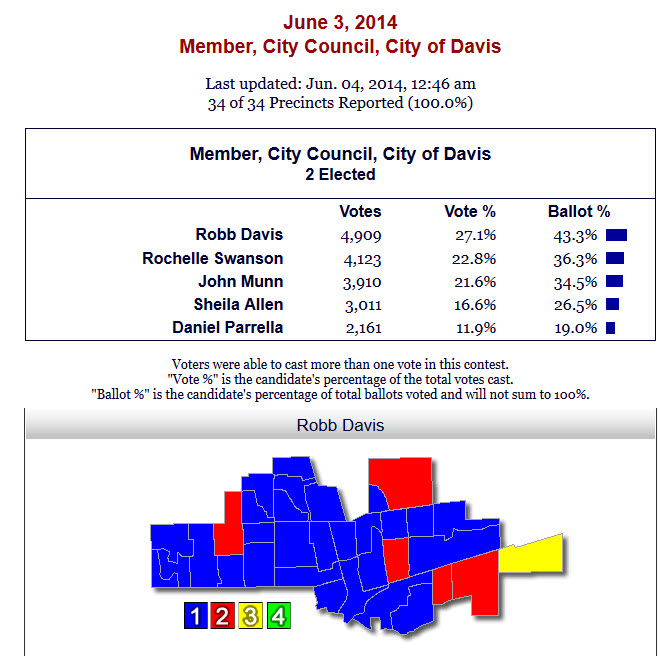 In the meantime, Measure O passed overwhelmingly with a nearly 1900 vote margin, 58.5 percent to 41.5 percent, setting up a potential parcel tax for November.

The bigger surprise was the narrow 264 vote margin for Measure P, which, if it holds, would repeal the city’s water rates, leading to speculation of a potential lawsuit to invalidate Measure I.

The Vanguard spoke to Robb Davis moments after he learned that he had won.

He told the Vanguard, “I was running to get on the council and the issue wasn’t being in first place, I really didn’t even give it a thought.” He added, “I’m not even sure first matters, it’s two of us that are going to serve.”

Robb Davis attributed his victory to team work. “We ran, I think, the best campaign, and we did it as a team,” he noted that they brought in 80 to 90 volunteers that did significant things. “I attribute it to the hard work of grassroots people, many of whom have never been engaged in any political campaign at all – who came out, walked precincts, hosted coffees, put lawn signs in their yard – I just think it’s an effort of a team of people that were committed to seeing me get elected.”

“I just attribute it to the hard work of everybody,” he added.

Robb Davis noted that, while he is one of five people on the council, “the first month or two is going to have to be taken up by a conversation among all councilmembers about the maintenance backlogs in our streets and other infrastructure.”

He said as a result they will have to decide “if, and the amount that, they come back to the voters” in November. While he did not commit to a parcel tax, he did say that someone would have to show him a viable alternative to deal with the significant infrastructure backlogs in the short-term, without putting it off for five years.

“I think we have to make a case to the voters that this is critical to the situation of the city,” he added.

The Vanguard spoke with Rochelle Swanson, as well. She indicated that she was not declaring victory at this point. “I’m just going to wait and see how the ballot count rolls out,” she said.

“What I witnessed tonight at the different parties I went to, is that there was a lot of surprise at some of the outcomes, and I think that this election was a good snap shot of what happens with a very low voter turnout. I think people make assumptions about how things will turn out, so they think their vote is represented, so they don’t actually make their vote count.”

She said that if she indeed ends up being elected, her first priority is “getting this budget through and getting it approved.”

Rochelle Swanson indicated that she and Lucas Frerichs are on the city manager subcommittee, and that they will begin the interview process shortly to hire the permanent replacement for Steve Pinkerton who left at the end of April after being hired in February to take the General Manager position at Incline Village, Nevada.

While there maybe some sorting out to do, it is safe to say that Robb Davis will be the next mayor. Rochelle Swanson and Measure P remain undetermined, though it seems likely that their respective leads will hold.

The Vanguard will have more analysis on these election night results in the coming days.

50 thoughts on “Davis Elected as Mayor Pro Tem; Swanson with a Narrow Lead Over Munn for Second”