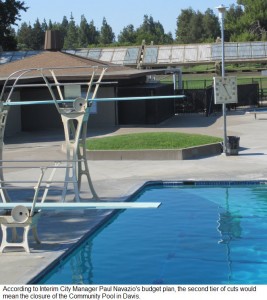 Despite some recent criticism, the Davis City Council should be commended for getting the parcel tax discussion underway as soon as they reasonably could, which was immediately after the election with a preliminary discussion, followed up with a solid discussion last week.

The council was clearly divided in terms of what should be placed within the measure, as well as the form of the measure.

The council will have follow-up discussion, but unfortunately the city does not have its act together in time for us to begin analyzing the choices.

Interim City Manager Gene Roger’s agenda item for Tuesday notes, “As was noted at the study session, given the complexity of the subject matter and the expected timeline to receive survey results, the short preparation period between meetings makes it difficult to have the staff report ready by the deadline.”

He continued, “As such, the staff report will be provided upon its completion and posted on the website in advance of the June 24 meeting. It is anticipated that is will be available by close of business Monday, June 23.”

The Vanguard pushed hard for an external pick, but one thing we did not consider is that, with a retired annuitant, the city manager is effectively running on a clock that limits hours, whereas a city employee temporarily elevated to that status would be much like a more traditional city manager.

The idea of including a $10 million pool got slammed and slammed hard on the Vanguard this week. I still think it is may be opening a line of attack for the opposition to argue that we are putting non-essentials into the tax.

But a surprising source offered up to me a surprising argument. They noted that the city’s pools, like much of the rest of the infrastructure, has been deteriorating for some time. Including the pool in a mail-in ballot, however, would generate a large base for both supporting the measure and doing the volunteer work.

In this way, it would work similarly to the school parcel tax.

The person told me that next time something breaks in either pool, they are done for good and probably at a much higher ultimate cost just to repair. Pools and parks have been managed even more poorly than roads.

During the hot summer months thousands of people utilize the pools, not just 500.

We will see where the polls take us, but there is a possibility that the general public – rather than the Vanguard readership that has been aware of these problems for five years – is not up to speed on the critical condition of our roads.

The belief is that intensity of the swimming community will push the measure over the top.

I am not sure I’m on board, but, given the source, I’m at least going to think more on this point.

Where is the Innovation Park?

You may have noticed that, while the council is doing due diligence on getting a parcel tax, at least in the position where it could be considered in November, we have not heard boo on an innovation park which, if it were to be on the November ballot, would be on the same timeline.

Internally, we have heard rumblings of discontent. The city has laid this out on a platter for someone to jump on board. The community has been primed on the need for a revenue generator for some time.

The discussion around the failed Mace 391 project helped revive support for the findings of the Innovation Parks Task Force. Monday the Innovation Park Task Force will hear presentation from Studio 30, where Jeff Loux and Tim Denham will be recapping the “Davis Innovation Center Report” findings, recommending “Dispersed Innovation Strategy.”

That will be followed up with Prakash Pinto’s Presentation on 21st Century Innovation Centers.

The city sent out an RFEI – Request for Expressions of Interest – for a Davis Innovation Center.

At the same time, the city did not want this to be a top-down, city council driven effort and, instead, wanted to see the developers get out into the community and get the signatures to put it on the ballot.

That has not happened. There is nothing on this week’s city council agenda on a innovation park proposal and time is running short.

It therefore appears extremely unlikely that we will see an initiative on the November ballot that deals with an innovation park. And we need to be very mindful that this is no slam dunk issue – the voters in Davis has been generally opposed in recent years to converting farmland to urban uses.

I am not suggesting it is a losing fight, but it will take a strong strategy of outreach and engagement to win the day.

Which is it, Davis Enterprise?

Last week, much to our chagrin, in a piece that we roundly criticized, the Davis Enterprise attacked the city council for daring to be responsible and discussing parcel tax options as early as they could, rather than waiting until the last second.

The difficulty they had last week only underscores the wisdom of starting early.

But the Enterprise, in their weekly “Cheers and Jeers” feature, had a different idea.

They wrote, “Jeers to the timing of the City Council’s discussion of its next bid to siphon dollars from our wallets. While a parcel tax to fund overdue road repairs may well be needed, the discussion just one week after the approval of Measure O, the half-percent sales tax increase, was like rubbing salt in the wound.

“We have at least two opportunities on the near horizon to add to our business base — the Nishi property and land east of Mace Boulevard — and these must be seized if we’re to dig out of our endless budget problems. High-tech, locally based businesses like Marrone Bio Innovations and FMC Technologies Schilling Robotics want to stay in Davis, but we lack the facilities for them to expand,” they wrote. “Let’s give ourselves a chance at generating more revenue rather than piling additional burdens on Davis residents.”

As we noted last week, those are longer term revenue strategies, a fact that is underscored by our segment above.

However this week, the paper writes, “JEERS to the sidewalk upheaval on numerous streets around our community. The uneven sidewalks pose a danger to residents of all ages. The city owes it to locals to make sure they have a safe and secure passage en route to work, school and shopping, or if they’re just out for a stroll. We urge the City Council to make infrastructure repairs a top priority.”

Which begs the question as to how the Enterprise believes the city will fund sidewalk repairs – the sidewalk fairy? Which is it, Davis Enterprise, is the city of Davis irresponsible and insulting for discussing revenue measures or derelict for not dealing with the sidewalks?

Okay, the two are not mutually exclusive, the city councils of the past certainly bear responsibility for the failure of our streets and sidewalks, but again, I point to the voters who are only now seeming to wake up from a decade-long slumber on a number of critical city issues.

89 thoughts on “My View: Balls Are Being Fumbled All Over the City”