A cartoon published in the Davis Enterprise that seems to depict border guards in a flood of babies dressed as what would seem to be immigrants wearing sombreros has drawn complaints from Davis Enterprise readers.  Two comments in the Enterprise article call the cartoon racist.

Nathan Ellstrand, co-chair of the Davis Human Relations Commission, copies the Vanguard on a letter:

I cannot believe the audacity of a rather progressive newspaper like the Davis Enterprise to print a racist cartoon in its Forum section in its Tuesday, June 24th publication. The cartoon depicts tough-looking, white and tall Border Patrol officers in a sea of short, and what is presumed to be Mexican babies, who are shown streaming over the border and have pig-like noses and are wearing sombreros.

This cartoon was in incredibly bad taste, stereotypical and disrespectful to Mexicans and Latinos in general in this country, not to mention the Latino population that reside right here in Yolo County. We live in a region where Latinos comprise a significant part of our population and contribute significantly to the economy of the area.

I ask that you no longer use this artist or publish similar cartoons, and if you do, you will lose my subscription.

Does the cartoon cross the line?  You decide: 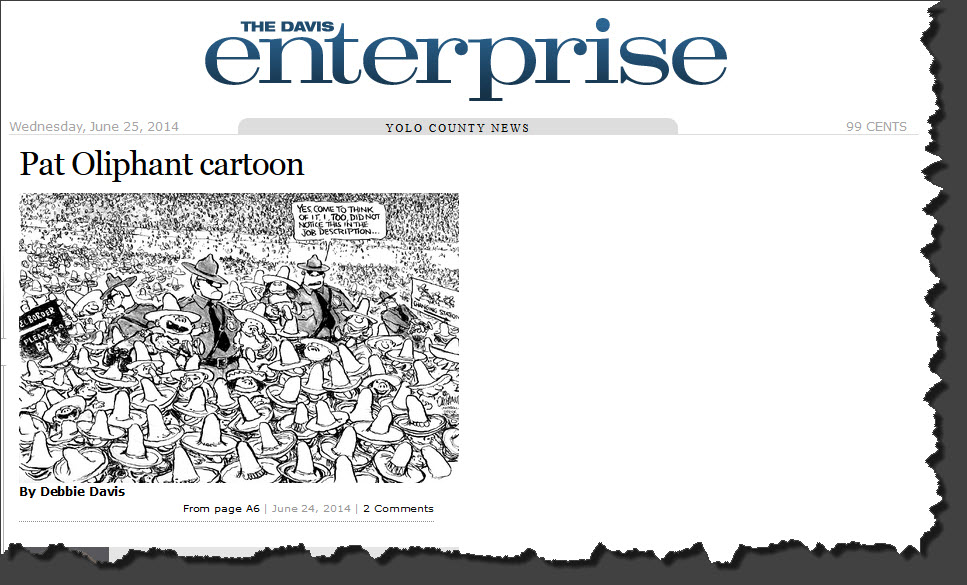