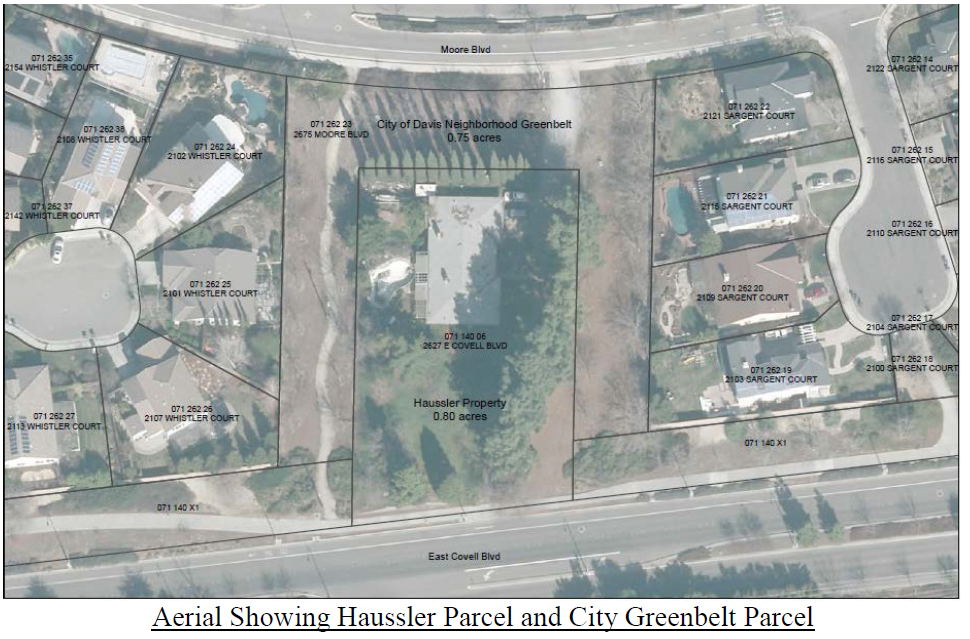 A little over a week ago, the Davis Planning Commission voted 3-2 to permit a developer to develop a 0.75 acre plot of land, currently designated as a greenbelt – although it is not the traditional configuration of a greenbelt lined with trees and is without the grassland open space.

The property is on Covell Blvd. within Wildhorse, between Sargent Court on the east and Whistler Court on the west with Moore Boulevard to the north.

As city staff wrote, “The project is subject to a land transaction between the City and applicant. This may result in the elimination of the easterly Neighborhood Greenbelt to accommodate the proposed residential project. The reconfigured property will result in an 8-unit subdivision with a net gain of 7 units. The existing residence on the property would be demolished.”

Staff notes that, in 2009, the city approved a four-unit development on the site, requiring a land transaction between the city and the property owners for the westerly greenbelt land.

They add, “The current proposal would change the easterly greenbelt to Residential Low Density designation in order to allow the proposed eight-lot residential subdivision. This land use designation change to accommodate the proposed project does not include the land transaction negotiation. However, approval of this land use change request is subject to the City Council approval of the land transaction, a separate action.”

At the Planning Commission meeting, about a dozen neighbors objected to the fact that the city would sell a greenbelt for development.

One of those neighbors is Claudia Morain, formerly a spokesperson for UC Davis. In an op-ed this week, she wrote, “The city of Davis, perhaps for the first time, is considering selling a greenbelt to a private developer.”

There were two proposals to subdivide a piece of property in Wildhorse that is now occupied by a single-family home – albeit one that is abandoned. Ms. Morain notes, “Both plans would annex the greenbelt that surrounds the property on three sides and convert this public open space into eight private back yards.”

“Many in Davis are deeply concerned about the proposals and the precedent they would set,” she wrote. “About 15 of us from the immediate neighborhood and beyond attended the hearing. I had one main question: Does Davis have a policy governing the sale of greenbelts to developers?”

Ms. Morain noted that Cheryl Essex, one of the planning commissioners, stated, “There is no policy governing the sale of greenbelts in Davis, because Davis does not sell its greenbelts!”

She added that they are not NIMBY’s, each one “voiced our support for increased housing density on this site.” The original plan, in 2009, only sought to redevelop the parcel where the existing home was on. The new plan calls for additional units in the area that is now considered the greenbelt.

Ms. Morain writes, “We just don’t think the greenbelts should be used for new housing.”

“The city is in closed negotiations with the developer, who apparently purchased the privately held land last fall, to set a price for the greenbelt,” she writes. “Planning Commission staff estimate that it costs the city about $500 a year to maintain the greenbelt that Paso Fino’s developers are negotiating to buy. If this greenbelt is too costly to maintain, I for one would like to hear other ideas for using the land.”

She continues, “It would be a wonderful community garden for the Wildhorse Homeowners Association to operate. Already, the mature walnut trees on the eastern leg of the greenbelt over my back fence, one of the last surviving stretches of the orchards that once covered the area, yield a bounty of nuts every fall. It would make a great dog park, too. Depending on the sales price, perhaps neighbors could pool their money and try to buy it. “

“Or there is another alternative: The City Council can revive the plan it approved for this piece of property back in 2009,” she writes.”That plan, which also was approved by the Planning Commission, would build four houses on the site. It would not just preserve the greenbelt. It would augment it with a patch of the private land that holds some of Yolo County’s oldest and tallest trees, trees that the Davis Tree Commission believes are irreplaceable. One, a majestic canary pine, is a nesting site for a Swainson’s hawk. Her flights to and from her nest captivate bird lovers throughout Yolo County.”

She notes that, at the hearing, developer Dave Taormino was asked whether the 2009 plan would “pencil out” for him: “Could he build four Paso Fino houses, leave the greenbelt alone, save the big trees — and still turn a profit?” She writes, “He said that he could.”

She added, “The 2009 plan was not among the proposals before the Planning Commission on May 29. Commissioners had just the developer’s two greenbelt-annexing proposals to choose between. That’s too bad. Everyone in Davis who treasures the city’s public open spaces has a stake in the fate of this parcel. I urge people to call their council members and ask them to revive the 2009 plan.”

She concluded, “But I’m afraid that’s not enough. We also need a policy in place to guide city officials the next time a developer is interested in annexing a greenbelt.”

There are a number of questions about this land transaction and the Vanguard has filed a public records request to find answers to that and other questions. There is some thought that this may be fast-tracked for council consideration this month.

Share:
Tags:DevelopmentGreenbeltInfillland usePaso FinoPlanning COmmission
Previous : My View: Council Not the URAC Needs to Make the Call on Water
Next : Analysis: Decline of the Yolo County Democratic Machine?

23 thoughts on “Should the City Develop on Greenbelts?”