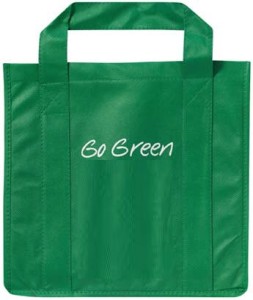 There are many reasons why after attending UC Davis my husband and I made the decision to settle in Davis and raise our family here. Among them is because we enjoyed living in a community that shared our values-especially in terms of environmental conservation.

These values were reflected in our city council decision last November to adopt a single-use carryout bag ordinance, which is designed to decrease the distribution of single-use carry out bags.  The ordinance that will go into effect July 1 prohibits retailers from distributing single use plastic bags at the point of sale. It also requires that stores  charge a minimum of 10 cents for each paper or reusable carryout bag.

This ordinance is part of a larger plan that the city adopted in December 2011 when it passed a Zero Waste Resolution that expressed the desire of the City of Davis to conserve resources, reduce GHG emissions, and reduce waste, litter, and pollution.

Davis is one of many municipalities that have adopted similar single bag use ordinances in an attempt to reduce their use.

An ordinance similar to the one adopted in Davis may soon be enacted in all of  California. Earlier this year, after three unsuccessful attempts to regulate single-use carry-out grocery bags,  a deal was reached in the California legislature on a bill that would ban single-use plastic bags at supermarkets, liquor stores, and pharmacies state-wide by 2016.

While it seems hard to imagine a time without them, the plastic grocery bag has a relatively short history.  They were invented in 1965 and first introduced to the U.S. in 1976 as an alternative to paper.  It was not until the late 1980′s that plastic bag usage equaled that of paper bags.  By the mid 1990′s about 80% of all grocery bags were plastic and that number would hit 90% by 2012.

Plastic bags have some advantages over paper. Compared to paper grocery bags, plastic bag production uses 40 percent less energy, they generate 80 percent less solid waste, and produce 70 percent fewer atmospheric emissions. They are also cheaper to manufacture.  But they come with problems. Due to their expansive and lightweight characteristics, single use plastic bags are easily carried by wind, and end up entangled in brush and trees, tossed along freeways, and caught on fences.

Studies have found plastic accounts for up to 90 percent of trash in California’s lakes and waterways, and single-use disposable plastic bags make up a large portion of the litter.  The state, along with its cities and counties, spend an estimated $34 million to $107 million annually to manage plastic bag litter. In 2013, Sacramento reported that its materials recovery facility shuts down six times a day to remove plastic from the machines. In 2010 the Yolo County Landfill reports spending  about $34,000 picking up plastic bags, representing about 1,815 man-hours.

In California approximately 24 billion plastic bags end up in landfills every year. While recycling is an option doing so proves to be a challenge. Few curbside recycling programs accept plastic bag because of problems with them jamming the processing machines. Though California has mandated that plastic bag recycling drop-off bins be made available at supermarkets and large retail stores it is estimated that only between 1 and 3 percent of bags are recycled.

Reports suggest that ordinances regulating single-use bags have had an effect. In San Jose, the city’s bag ban has reduced plastic bag litter 89 percent in storm drain systems, 60 percent in creeks and rivers and 59 percent in streets and neighborhoods.

As I finish the piece my husband, who for the record has consistently used canvas grocery bags for years, came home from an impromptu  grocery store trip with his purchases in yes, plastic bags.

The conversation that followed was similar to ones I’ve heard, (and engaged in), through out our community in regards to the single-use bag ordinance over the past several months.

When I asked why he opted for plastic bags, his response was,  “It’s not the plastic bags that are the problem, its the improper disposal of them.” He went on to mention that we needed plastic bags anyway to clean-up after the 70 lb labradoodle who occupies our home.

Both good points and ones I think are worth addressing. While I agree that improper disposal of plastic bag is a large part of the problem it’s not the entire one. Tremendous resources go into making these bags that are meant, by design to be used for minutes, and the fact of the matter is that, while some of these bags are being reused and recycled, a significant number of aren’t, and if they were we wouldn’t not see the environmental problems described in this piece.

While I believe that individuals through their personal choices are capable of effecting change, I also believe that some problems are significant enough that they need to addressed on a larger scale.

The problems resulting in the wide-spread use of plastic bags – from their manufacturing to their disposal – are in my opinion ones that can only be solved through the legislation of their use.

It is for this reason that I support our city council’s decisions to ban the use of plastic bags and mandate that business charge and retain a 10 cent fee for paper bags and I want to thank our businesses for efforts they have undertaken to comply with this new regulation.

Get those reusable bags ready, and when all else fails, ask yourself, do I really I need a bag for that?

Share:
Tags:Carry Out BansGHG EmissionsLandfillSingle Use Plastic Bag BanWaste ReductionZero Waste
Previous : My View: Failure Is Not An Option for Business Park
Next : Sunday Commentary: Seemingly No Way to Avoid the Water Rate Train Wreck

49 thoughts on “Single Use Plastic Bag Ban Comes to Davis”