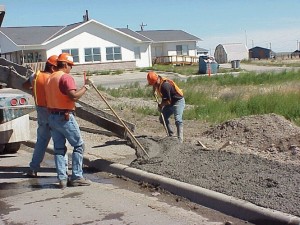 The Davis City Council effectively has until July 15 or so to decide whether or not to put a tax measure on the ballot to fund roads. I will make this statement again at the outset: the Davis Enterprise was completely irresponsible to criticize the council for discussing tax options when they effectively had only six weeks to make an informed decision.

Right now the council is scheduled to make a decision on July 1 – maybe they can do so, but at least this time they are not waiting until the last possible second before making the decision.

One idea we have heard floated is a $50 parcel tax that would allow the city to bond and receive about $25 million up front and fund roads ongoing at between $3 and $4 million per year. That scenario would require the city to look at other revenue measures for parks and building infrastructure – for instance, a utility tax.

The years obviously change as we would be looking to start this in 15/16 rather than 13/14.

On the one hand, that scenario has the advantage of being feasible and practical. The voters would likely be willing to support a relatively small $50 per year tax on each parcel, even at a two-thirds vote requirement, and the council could put off other decisions until 2016 where they could put a general tax on the ballot, once again requiring a simple majority vote.

Yesterday in the comments there were some alternative tax ideas floated. I want to be clear – I support a tax that allows the city to utilize revenue bonds at lower yields than general obligation bonds. I am not partial as to one tax or another as long as they meet my time and revenue requirements.

The problem is that $25 million does not appear to be nearly enough to cover the city’s upfront needs. 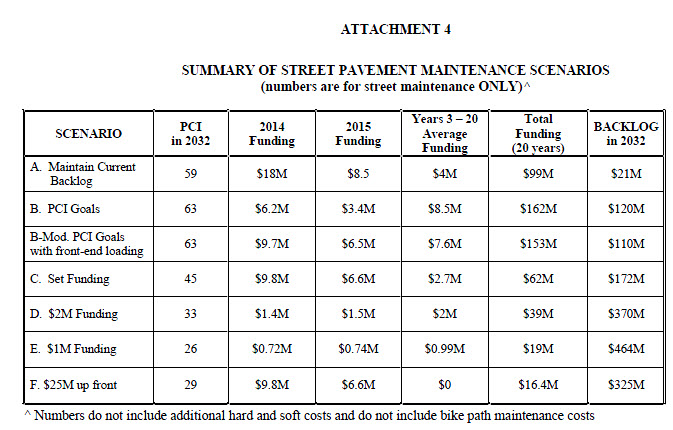 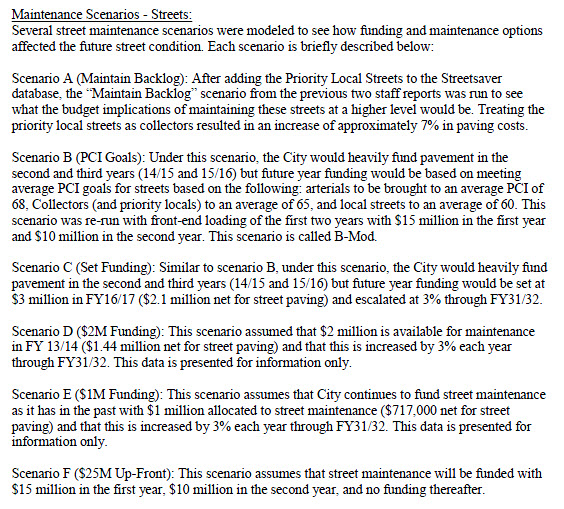 These were the six scenarios laid out by staff in May of 2013.

The city analysis underlies the problem. While Scenario A is “heavily front-loaded with $55 million in funding over the first 6 years; the annual average cost is relatively low and the resultant backlog in 2032 is low. The City would have difficulty meeting the $55 million over 6 years.”

However, the $25 million scenario “doesn’t provide enough up-front improvement to the streets.”

But it is actually a lot worse than that.

She writes, “The budgetary projection completed in 2012, by our consultant Nichols Consulting Engineering, estimated that our backlog for street maintenance would be $41 million in 2014. In addition, due to a new interpretation by the Department of Justice, the City would be required TO upgrade corner ramps. Since this is a new requirement, we are not certain how this will impact our budgets but expect the additional work would cost $8 to $13 million. The total would then be in the range of $49 to $54 million.”

Even assuming the city could come up with this magnitude of funding – which Bob Clarke a year prior argued was not realistic – “the constraining factor for time required to complete the repairs is the City’s tolerance for having roads under construction.”

Ms. Borders argues, “Realistically, the City would not be able to tolerate the entire work being done in a single construction season (assuming work can be done over 6 months, from April through September, in any year) even if we could get a contractor(s) to work on this scale and schedule.” 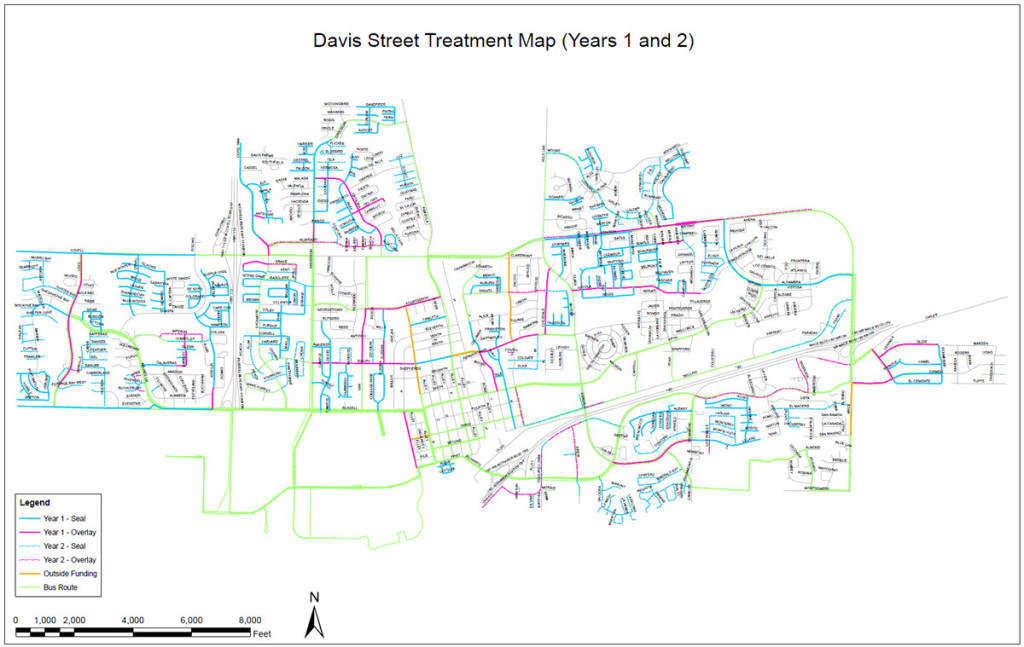 Instead she argued, “Due to the number of streets that would be under repair under this scope of project, we anticipate that a minimum of three construction seasons would be required to perform the work and that even splitting the work over THREE SEASONS would be a burden on the community. Realistically, the work could take from three to ten seasons.”

As Bob Clarke noted, “If cost was not a constraint, the governing factor would be community tolerance of the construction inconvenience. If the City decided to charge ahead full speed and simply tell the community there would be short-term pain to quickly get through the work, that would be one timeline, but if we were to schedule work to some level of ‘reasonableness’ regarding community impacts, that would likely be a longer timeline.”

The consequence of this is that $25 million upfront is not going to do as much as council might have originally believed.

Borrowing money upfront would probably have to be in the $85 to $100 million range in order to be spent over five to ten years.

Based on this information, the council needs to clearly assess what a $50 parcel tax and $25 million will actually do in the city. It needs to determine how much of the backlog would be addressed, and what would $3 to $4 million do going forward, when the council initially considered something closer to $5 to $8 million – only to be paired down in May 2013 to the current scenario.

The question we must answer is whether that is sufficient and if not, what is.

29 thoughts on “Special My View: Roads Crises Will Not Be Easily Solved”