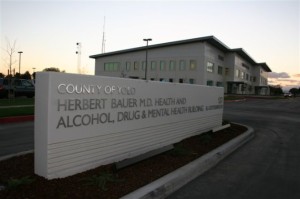 I have told this story before here, but it bears repeating. In 2011, shortly after our then seven-year-old nephew came to live with us, he experienced some serious mental health problems. Not knowing what to do and fearing for his safety, we took him to Sutter-Davis Emergency.

From there they called the mental health crisis official who apparently drives around the county in emergencies and provides some services. While he was a pleasant individual, the only service they would offer us was to basically commit our nephew and monitor him at their facility for a few days. We were not willing to do that.

We then started reaching out to the county, but nobody seemed to know what to do. Finally, we went to Supervisor Jim Provenza’s office, and his Deputy Gina Daleiden walked us across the hall to the Children’s Alliance, and Katie Villegas made two calls and got us into treatment. Eventually, the school district found out that they could get him educationally-based mental health services through his IEP (Individualized Educational Program).

I recount this story as a prelude to the Grand Jury’s report which found the “need for better access to mental health crisis services in Yolo County.” Here’s the thing, we told this to at least three county supervisors three years ago, and it is not apparent that they acted on this information.

A press release came out this week on the Grand Jury’s findings.

They write that they “investigated a complaint that alleged the Yolo County Department of Alcohol, Drug and Mental Health (ADMH) did not provide prompt treatment to individuals experiencing a mental health crisis.”

ADMH is the county agency that provides treatment for alcohol, drug and mental health issues to the indigent and to Medi-Cal clients.

The Grand Jury found, “ADMH does provide treatment to people experiencing mental health crisis in its clinics, however, access and availability of treatment is limited by the location and operating hours of its clinics as well as a shortage of qualified mental health clinicians.”

The Grand Jury “learned that many people experiencing mental health crisis in Yolo County enter the treatment system through contact with law enforcement or referral to local emergency rooms. Law enforcement officers or a clinician may place a person experiencing mental health crisis on an ‘involuntary 5150 hold’ if the person is deemed to be a danger to himself, to others, or is gravely disabled. “

As we know, this itself is a problem, as law enforcement is often not the best trained or equipped to handle individuals suffering from mental illness.

Moreover, the problem is increasing as more people enter the system through law enforcement and 5150 calls.

“The Grand Jury called on all local law enforcement agencies to provide more of its officers with CIT (crisis intervention training) training and to develop an integrated plan to ensure that CIT trained officers are dispatched as first responders to ‘5150’ calls,” they add.

“The Grand Jury also learned that there is often a delay in receiving psychiatric care when a patient presents to an emergency room,” they write. “The patient first must be cleared of all non-psychiatric medical issues before being referred to a psychiatrist. Neither Sutter-Davis Hospital nor Woodland Hospital has a psychiatrist on site. Both hospitals contract for psychiatric emergency room assessments with treatment centers in Sacramento, further delaying access to care.”

This is what we learned in early 2011. The hospital had to call for service, we had to wait, and we were fortunate, as the individual on call came within the hour.

The Grand Jury “learned that ADMH recently received a $1.2 million grant from SB82 funds which are intended to assist counties to provide mental health crisis services. ADMH intends to use these funds to establish crisis response teams consisting of a licensed clinician and peer counselor who would respond, along with law enforcement, to a call involving a person in mental health crisis.”

They add, “These crisis response teams will be able to provide immediate treatment to the person in crisis, wherever they are located in Yolo County and at whatever time the crisis arises. It is hoped that these crisis response teams will reduce the number of individuals in crisis who seek emergency room treatment or who are arrested or taken to jail.”

This report confirms what we really knew back in 2011 and communicated to at least three members of the Board of Supervisors at that time. We understand that there are budgetary issues, but this is really becoming a crisis.

As we know in recent weeks, the mental health system has been in focus for its failure to deal with individuals that end up becoming dangerous to themselves and the community.

We are also concerned that, despite some very high profile cases that were mishandled by law enforcement, officials are not being properly trained in crisis intervention.

Hopefully this grand jury report will serve as a wake up call to the county that budgetary considerations have led to an alarming crisis in our mental health system.