The Utility Rate Advisory Commission (URAC) struggled to gain traction in a daunting approach on how to evaluate what are now seven different alternative rate proposals. Herb Niederberger, the city’s utilities general manager, and consultant Doug Dove told the URAC that all seven rate plans are conventional plans with a fixed component and a variable component.

As Elaine Roberts Musser pointed out, the difference between the various rates is only about $9, so it comes down to a matter of preference and choice. The URAC spent most of its time going over a proposed matrix, which had a few changes.

Here is the water rate study update for 2014 with a sample bill comparison.

The members will spend the next week mapping out their priorities and will come back next Thursday prepared to discuss and ultimately recommend a rate structure to the city council in time for the council to make its recommendation at the June 24 meeting ahead of the July 1 deadline. 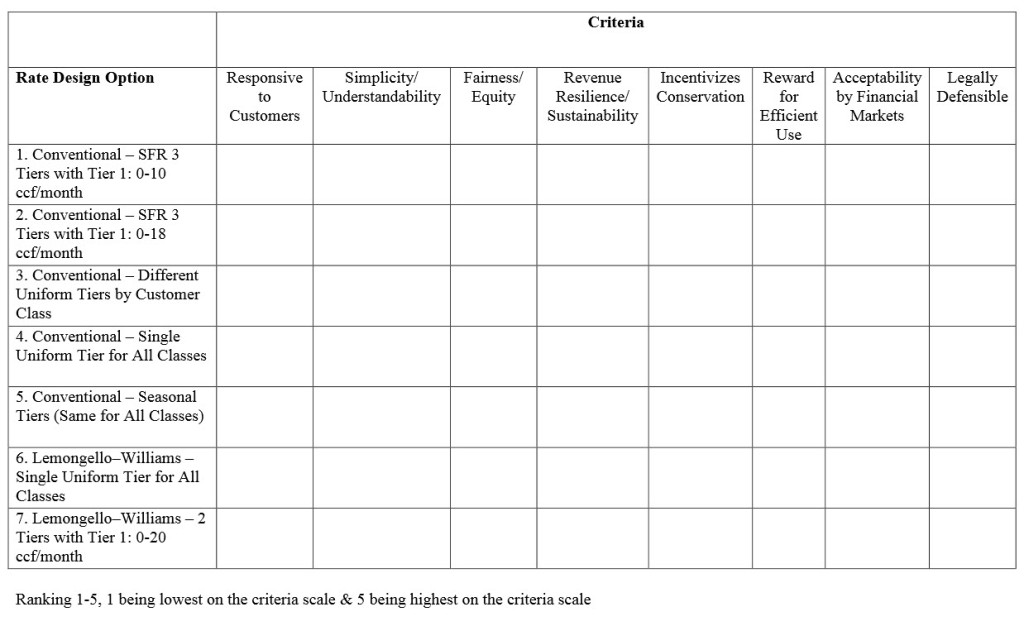 According to Mr. Niederberger and Mr. Dove, each of these rate structures are conventional rate structures, which means they would in theory pass Prop 218 legal criteria of the costs being proportional to the cost of service. However, the feeling among the URAC members was that any rate structure that the city implements through a Prop 218 process would likely face legal challenge.

It was the belief, however, that these rate structures would survive such challenges.

The body spent much of their time going over the criteria for the matrix.

Responsive to Customers: “The price of water needs to reflect its true value and needs to be responsive to the area’s particular demographics, socioeconomic goals, geography, clime, residential density. The rate design must recognize local factors are appropriate to consider, and establish a process to determine appropriate, reasonable water consumption for its customers. A high rating would be for a rate design that is responsive to customer needs and recognizes expressed concerns.”

Simplicity/Understandability: “Households should be able to estimate changes in their water bills as a result of increases in water usage. A high rating would go to a rate design that is simple to understand and does not require several readings to grasp what the rate accomplishes. The simpler that rate design, the higher the rating. A rate design that needs interpretation by others would be ranked lower.”

Fairness/Equity: “The intent is to decrease water usage where the customer has discretion over usage, not to punish water usage where there is no discretion in usage. A high rating would go to a rate that treats customers in the same class fairly with charges assessed within each class fairly with charges assessed within each class based upon the cost of service to this class. A rate that allocates costs to provide service equitably within the class would rank higher that a rate based upon some other measure of fairness. A rate that subsidizes one class of customers at the expense of another class of customer would rank higher [lower].”

Revenue Resilience/Sustainability: “A rating that consistently performs and generates revenue is more sustainable than one that is not. A rate design that produces a steady revenue stream under various demand scenarios would receive a high rating. A rating that is not tolerant to various fluctuations in demand and sales, such as a drought or state mandated conservation, would receive a lower rating.”

Incentivizes Conservation: “A rate that encourages the customers within each class to conserve would be ranked higher than one that does not. A rate design that provides incentives (discounts for low use) or disincentives (penalties for high use) would rank higher that a rate that does not provide such an incentive/disincentive within each class. If a customer’s water use exceeds certain limits, subsequent water use is charged at a higher rate. As consumption continues into higher tiers, the price for water consumed continues to rise. Typically, the more dramatic the rise in cost, the greater the incentive is to conserve water.”

Reward for Efficient Use: “Rates should charge each customer for the actual amount of water consumed. A rate that allows for a reward for efficient use would be ranked higher than one that does not.”

Acceptability by Financial Markets: “A rate design that generates sufficient revenue and is backed by a rate stability reserve would be viewed very favorably by investment market would ranked very high. A high rating would go to a rate design that provides enough revenue to secure advantageous municipal financing. A rate that is volatile resulting in large revenue swings throughout the year would be ranked lower.”

The URAC came to the conclusion that, while these criteria are important, each member may assign different importance to different factors and they will use this more as a guide and tool, to discuss the potential rates next week, than an absolute metric of which rates are best.

At the end of the day, the URAC members noted that, in a lot of ways, if these are legally defensible rate structures that pass constitutional muster and provide the city with sufficient revenue, then this becomes a political and policy issue rather than a technical issue.

The emerging consensus, whether it is accurate or not, is another story – that the Measure P vote was a rejection of CBFR rather than the higher rates overall. One councilmember told the Vanguard that the inclination may be something similar to the Lemongello-Williams model without the CBFR name – relatively low fixed rates with the rest being variable.

City staff has expressed concerns for such a formula. However, yesterday both Doug Dove and Herb Niederberger were adamant that all of the rate structures were legally defensible.

In an email to legal staff on Tuesday, Mr. Harrington wrote to Harriet Steiner, “I think there is a possibility that the City acted outside of its legal and voting authority of Measure I when the City signed the JPA/Woodland/C2m Hill contracts to build the plant.”

He added, “If so, I don’t think the city will get stuck with the tab, since the other signing parties knew about the ‘subject to’ clause and the YRAPUS litigation and the pending initiative that I drafted and qualified and put on the ballot, aka Measure P.”

He writes, “The City did not have to put Measure I on the ballot, but once it did, the City is firmly bound by the language that the City drafted.”

In a Wednesday email to the city council, Mr. Harrington wrote, “As you probably know, County Elections just posted the final results, and P passed 51% to 49% percent.   It’s a great win for the ratepayers. We will have a formal communication soon, but in the meantime I know you are all planning on how to proceed with new rates.”

He added, “We want the City to know that the new rates simply have to be on a citywide vote ballot, as an advisory measure.  If it passes, and it should if the rates are greatly improved in Version 3.0,  then the City can run the Prop 218 process with no hindrance.”

He argued, “The voters have twice said they want to vote on the rates, and we have to honor that for the third try at rates. The most likely ballot for this could be November, but I am sure you are having many discussions as to new revenue measures, too.”

“My understanding is that the old rates go into effect ten days after when the election is declared, which should be this Friday, or does the CC have to put it on the agenda for CC approval?” he continues. “We appreciate that the CC really wants to try a fast Prop 218 process and slam in some new rates, but we ask for your patience so there is a public process that all can get behind.”

The city has not formally discussed the possibility of putting the rates on the ballot, however, at least one councilmember dismissed the notion and indicated that Mr. Harrington could collect signatures if he were so inclined.

Next week’s URAC and the June 24 council meeting will be critical on this point.