The results were remarkable in the Fourth District Assembly Race – with low voter turnout the rule, Republican Charlie Schaupp held a one vote lead over Democrat Bill Dodd. The key question, though, is whether Dan Wolk, who is third, can gain enough votes to finish in the top two. He is currently about 630 votes off the pace.

In Yolo County, there is a total of 9600 uncounted ballots, but some of those will be in West Sacramento which is not inside the Assembly District. That leaves probably 7000 votes in Yolo County. The Napa Elections Office indicated that there were between 5000 and 10,000 uncounted votes there.

What does that mean for the race? If the distribution of uncounted ballots follows the distribution of the votes counted to date, we would expect not much change in the results. If, however, Yolo County had a disproportionate percentage of the remaining ballots, then things could swing for Dan Wolk.

From what we know at this time, there is no evidence that the results are disproportionately distributed among the remaining uncounted ballots.

The Bill Dodd campaign issued a statement on Wednesday evening, “according to figures gathered from each of the 6 county registrars, the ballots that remain to be counted will affirm that our campaign has made the November run-off election as one of the two top vote getters.”

The analysis shows a few interesting trends. First, Dan Wolk only won Yolo County. He did fairly well in Solano County where he works and where his mother represents, but that’s a fairly small population. Second, Bill Dodd did very poorly in the eastern portions of the district – Yolo and Solano County.

Third, while Schaupp dominated the smaller rural counties, he was steadily in the twenties across the board, picking up just about the district percentage of Republican voters everywhere.

The key question is how many rural votes remain to be counted – if those counties got their votes in earlier, that could mean that Dan Wolk sneaks past Charlie Schaupp. On the other hand, the rural counties do not account for a huge number of votes, so the steadiness of support for Schaupp may play to his advantage regardless of where the votes are.

Krovoza versus Wolk: The Blame Game

The blame game is already beginning and it may grow louder as time goes on if the results hold. There is lament that Joe Krovoza and Dan Wolk, who together got nearly 43% of the vote, which easily combined would have been first, split the liberal vote and prevented Davis from extending its dominance in the Assembly for another six to twelve years.

Supporters of Dan Wolk are placing the blame squarely on Joe Krovoza. They argue that the results show that Joe Krovoza was really only competitive in Davis, where he finished first, and Yolo County where he finished second, and he failed to run a district-wide campaign.

They argue that Joe Krovoza knew that Dan Wolk was going to run, and jumped into the race first to beat him to the punch. Leaving aside issues as to whether there was a sense of entitlement, it’s a tough argument to make a priori.

First, Joe Krovoza raised over $300,000 in the race, so the idea that he was non-competitive is a bit far-fetched. Second, he entered believing that he would have had much greater support from the local political establishment than he got.

Despite this, he managed to best Dan Wolk on their home territory where the voters are most familiar with both candidates.

One Wolk supporter wrote, “Krovoza never stood a chance in this race, he never won significant support outside of Davis, and his presence in this race was only as a spoiler.”

Perhaps, but there is no way that Joe Krovoza really could have been expected to predict that before the race began. 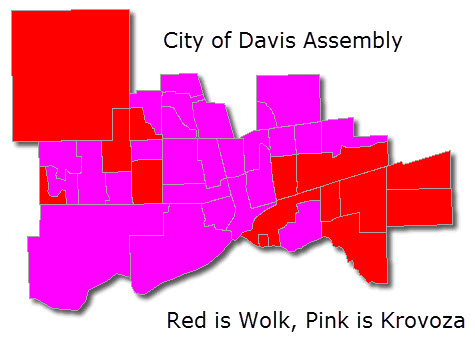 In fact, the map of Davis looked more like a city council distribution than anything else.

The ugliness of the independent expenditure campaign also ignores the fact that Dan Wolk had some key liabilities including his age and experience. Also, from some people’s perspective, the IE campaign reinforced the perception that he was beholden to public employee unions.

Still there are important lessons to be learned here and one is that if it is important to Davis residents who represents them in Sacramento, then these sorts of issues need to be handled early and a decision needs to be made as to who should run.

An interesting and unexplored subject would be to figure out how many people who supported Joe Krovoza would have had Dan Wolk as their second choice. There is a presumption by many that without Krovoza most of those votes, especially in the eastern part of the district, go to Dan Wolk, but I have spoken to a number of people who said they would never have voted for Dan Wolk for a variety of different reasons – experience, track record on the council, the perception of political nepotism, etc.

We will probably never know the answer of how many people had Dan Wolk as their number two choice after Joe Krovoza.

Unfortunately, not only did that not happen, but both sides blame each other for the end result.

In that sense, the results here are predictable and preventable in the future.

In the meantime, we will watch the results carefully here to see if anything changes.

66 thoughts on “Vanguard Analysis: Is Dan Wolk on the Outside Looking In?”