At the end of Election Night’s vote count, we saw Measure P passing with 51.2 percent of the vote. Its lead at the end of the night was 264. However, unlike for John Munn, the trend for Measure P was narrowing the gap. As a result, there is a chance, depending on a number of factors, that Measure P could ultimately be defeated.

When the first returns came in just after the close of polls, Measure P was passing with about 54% percent of the vote by about 550 votes. John Munn was ahead of Rochelle Swanson by 73 votes.

As we noted in the other article, the interesting thing is that John Munn, while clearly linked with Measure P, underperformed the measure by 1600 votes. That left him 213 votes out of second at the close of the night, while Measure P’s gap closed to a 264 vote lead.

Interestingly enough, the change in their margins exactly trended with each other. John Munn lost 286 votes to Rochelle Swanson among Election Day votes and Measure P lost by 286 votes on Election Day.

By our count then, on Election Day, Measure P was defeated by a 53-47 margin. That was enough to close the pre-Election Day gap, but not overcome it.

We ran a few scenarios, given the likely numbers of votes remaining and the results are very interesting.

We know that there are about 9600 outstanding votes in Yolo County. The elections office could not tell us the proportion of those votes that are Davis. So we ran two scenarios, one where there is 2000 votes to be counted and one where there are 3000.

If there are just 2000 votes to be counted, Measure P would have to receive over 57% no votes in order for it to go down to defeat. If there are 3000 votes to be counted, Measure P would need to receive just under 55% of no votes in order to be defeated. It would have to get up to 4000 for the percentage of votes to defeat Measure O to mirror the Election Day distribution of votes.

How likely is there to be 4000 votes to be counted? Given that there are just under 11,000 votes cast, it is possible, but we think 3000 is more likely. The No on P would have to increase its frequency in those votes over pre-election and Election Day totals, and that does not seem that likely.

Based on our analysis, it is unlikely that Measure P will end up being defeated, but not impossible.

The pre-election vote totals are obviously not a complete snapshot. While voting by mail has become institutionalized to the mainstream electorate, there are small differences in the voter breakdown, which still tends to be older and more conservative than the Election Day electorate.

However, it does help us analyze temporally a bit of what was happening at the time when Matt Williams felt the need along with Donna Lemongello to alter the water rates.

Matt Williams references his experiences when canvassing, and it is clear that at the time he presented the revised water rates to council, Measure P was passing and by a significant margin.

There will be a tendency for core Measure P opponents to put blame on Matt Williams and Donna Lemongello for the passage of Measure P, if the result holds, but the numbers do not bear that out.

If anything, the numbers show that those who voted on Election Day and therefore had access to the knowledge of the discussion and the council’s action were far more likely to vote against Measure P than those who voted earlier. If anything, the action of council, as well as Matt Williams and Donna Lemongello, helped to narrow the gap. 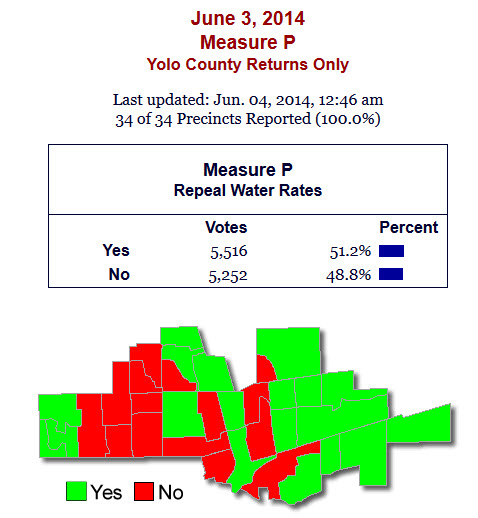 The other interesting thing is the map of Davis.

There are some clear exceptions in the core of downtown, but for the most part, the peripheral subdivisions, which tend to be newer, more wealthy and more conservative (as well as pro-development), were the ones that voted to support Measure P.

The core of town, with some exceptions, tends to be older and more liberal, and they voted against Measure P.

That suggests that the revolt against the water rates tended to be by wealthier and more conservative people than those supporting the water rates. That is a fascinating finding that will warrant additional attention.

Bottom line, unless there was a drastic shift, we expect Measure P to pass. We do not know what that means policywise for the city of Davis.

Share:
Tags:CBFRCity of DavisElectionsMeasure Pwater rates
Previous : Vanguard Analysis: Is Dan Wolk on the Outside Looking In?
Next : Advertisers: Lock in Your Low Rates Before Prices Go Up July 1!