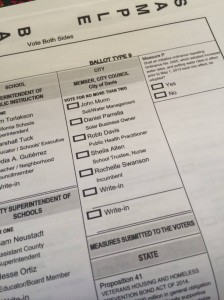 Election Day is either finally here or all too quickly here, depending on your perspective. In ours, with the lack of real polling, prognostication is a crap shoot. However, we can guess like everyone else and here are our best shots at handicapping how the races stand locally, rather than necessarily predicting the outcomes.

We received information yesterday that 4749 ballots have been received out of 20,062 issued. That may well be 80% of the votes in this race that, at least statewide, is expected to be a possible record low for turnout. Locally, we have covered a lot of races and never seen such lack of interest in the races.

As this is the Davis Vanguard, we will start in Davis and work our way out.

On May 25, we made our predictions and we do not really see a good reason to change them at this point. At this point we believe that Robb Davis is the favorite to win – he has run a strong campaign, his campaign team has worked a tremendous amount of precincts and talked to the voters. John Munn benefits from his own influx of cash into the race as well as being the only candidate in favor of Measure P. The last week has probably only solidified his advantage, given the uncertainty about Measure P.

Rochelle Swanson had a solid showing in late money, but we have concerns about her lack of ground operation. The anti-incumbency angle made may harm her as well. We have discussed at length the troubles that Sheila Allen has had in the last two months, punctuated by the remarkably low $3600 in donations since March 18. Daniel Parrella ran a strong race, and may well pick up a substantial portion of second votes.

Our bottom line: Robb Davis, John Munn, and Rochelle Swanson battle for the top 2. Sheila Allen seems to have fallen off the pace. Daniel Parrella is now a wild card.

We dislike the campaign approach of the Measure O campaign. We lament the lack of a more serious challenge to focus community attention on the budget. It won’t be a runaway victory, but given the relatively low amount of money, we expect Measure O to pass. It will be under 67% which leaves the bigger question as to what happens in November with the parcel tax and the needed roads funding.

Ten days ago we expected Measure P to fail. It still may. But there have definitely been a few curve balls added to the mix. We have since had the revised CBFR, staff comments dismissing it as a possibility, revelations about staff changing CBFR on the fly, and of course Brett Lee’s statement that seems backed by council that the water rates will change regardless of the outcome, leaving the only question to be one of liability.

Our bottom line: Too many people may have voted on Measure P for the last week to have mattered. The bench mark is whether Measure P goes down by a larger or smaller percentage than Measure I passed by.

We did our story yesterday.

Bottom line: This is one of the most interesting races to watch, with impacts across the board. We see Bill Dodd as the leader. Dan Wolk and Charlie Schaupp battle for second. Charlie Schaupp is one wild card, but Joe Krovoza is a bigger one.

We have not covered this one in quite a while. The good news is that there was no bombshell like there was with Clinton Parish back in 2012. There are really two questions in this race: (1) Can Janene Beronio, backed by most of the Yolo County legal establishment, get to 50% and avoid a November run-off and (2) if she doesn’t, who is No.2?

There is no question that Janene Beronio is the front-runner. She announced with the full backing of the judges, and she has most of law enforcement, the DA, the retired judges, the Bar Association, and quite a few elected officials in Yolo County behind her.

But it is a four-person race, and really, once you get outside of the legal establishment, the playing field is more level. Recall in 2006 that Jeff Reisig had a huge advantage in endorsements but the margin of his victory over Pat Lenzi was 53-47.

Look no further than the County Supervisors to see the split. Janene Beronio has Duane Chamberlain and newly-appointed Oscar Villegas backing her. But Larenda Delaini has Matt Rexroad and Don Saylor. And Rick Cohen has Jim Provenza. That’s an interesting split that reflects the possibility that Beronio’s strength fades the further away you get from the courthouse.

It is hard to see how Ms. Delaini, who may have the best long-term prospects of getting appointed to a future seat, wins even with a strong ground campaign. It is therefore our view that, if there is to be a runoff, it is between John Brennan and Rick Cohen.

Our bottom line: There is a reasonable chance that Janene Beronio wins outright tonight, but if she doesn’t it looks like John Brennan and Rick Cohen have the best chance to finish second.

This is a match up between Jesse Ortiz and Sam Neustadt. Jesse Ortiz is a long time figure in Yolo County, well known in political circles, that gives him an immediate leg up. Sam Neustadt, however, is a very experienced school official in his own right, and he has the support of Delaine Eastin, Susan Lovenburg and some other notables.

There have been a few controversies including the one we covered a few weeks ago involving an incident that occurred in a parking lot of Woodland Community College. More recently was a potential fiasco that did not directly involve Mr. Ortiz that would have paid his predecessor a modest pay increase as he was about to retire. However, wiser heads prevailed and the county school board nixed the idea.

Our bottom line: Sam Neustadt is eminently qualified and the voters probably can’t go wrong here, but we think Jesse Ortiz’ advantages will trump other factors.

Freddie Oakley is a popular figure, has been in office for some time and, for the most part, appears to be safe. However, a letter from some of the assessors shines a less than flattering light on Ms. Oakley, then add in her lack of robust campaigning and complaints that she puts in about three to four hour days, and we have some intrigue.

Still, Ms. Oakley has a long list of endorsers, earned a lot of political credibility on the issue of same-sex marriage, and it’s hard to see her losing.

Our bottom line: David Schwenger has run a strong campaign and could be a dark horse, but the money still is on Freddie Oakley’s side.

Davis residents cannot vote in this race and unfortunately we did not have a chance to cover it as much as we would have liked. Mike McGowan retired after years as the supervisor from West Sacramento. Among the finalists to replace him was former West Sacramento Vice Mayor and long time City Councilmember Oscar Villegas and activist Norma Alcala. Governor Brown back in March appointed Oscar Villegas.

The district has changed and portions of Broderick and Bryte, with heavy Latino Voters, are now in Matt Rexroad’s district. That hurts Norma Alcala’s bid for an upset, but she is an organizer and likely outworked Oscar Villegas on the ground.

Our bottom line: We’ll go with the appointed incumbent and long-time councilmember, but an upset would not shock us.

Since I’m usually wrong about several races, this is all for entertainment purposes only.