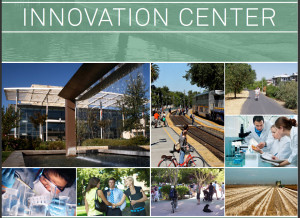 As you know, on Monday, June 23rd the City received three different concepts for innovation parks of about 200 acres each in three different locations. And each concept had a different team of landowners, developers, and land use specialist. And though I won’t spend time in this article comparing and contrasting the submittals, it was a hallmark moment for Davis to have that kind of attention regarding an opportunity that the community has been discussing for several decades.

In response to the submittals, over the last few days I have heard the sentiment “what an incredible problem to have” from several people while discussing the Davis Innovation Center Request for Expressions of Interest (RFEI). And when you think about it, it really is a unique set of circumstances that many cities in the US would like to be considering. In fact, can you think of more than three places in the Sacramento region, or even the greater Central Valley, which have the opportunity to attract this level of discussion?

After sending the proposals to the City Council on Monday night, the response from incoming Mayor Dan Wolk was “what an incredible problem to have” for the City to be given the task of sorting through the merits of the three very different concepts. And I couldn’t agree more. Instead of having to engage with a single team to work through an opportunity at a single location, the community now has choices. And though you may argue that none of the concepts is perfect, rarely do we find the perfect set of circumstances when looking at these kind of opportunities.

As an early reaction (and completely of my own sentiments), I would love to have a proposal that includes the international level abilities and experience of Hines (the developer of Research Triangle Park in North Carolina), with the stated needs of FMC Schilling Robotics as a catalyst tenant, on a piece of land that was donated to the City. But alas, that is not a concept though each of these three elements exists in one of the submittals.

So reality dictates the conditions from which we can work on this effort. And from my view, that reality is a pretty good one because we ARE dealing with options even though we may not have a perfect scenario… and I should probably note that perfect is in the eye of the beholder based on personal beliefs and values and preferences, so some individuals will most certainly see one of the concepts as perfect.

When I showed the submittals to a friend from an East Bay city to get an uninvolved party’s take on the concepts, she too stated that it was a wonderful problem to have. She further lamented that she couldn’t understand why her community, which hosts a revolutionary electric car manufacturer, wasn’t getting similar traction in their search for a master developer for a planned innovation park concept that has been far more vetted and is supported by a majority of residents. Of course my reaction was to smile sheepishly while I thought to myself, “we are pretty blessed in Davis with some exciting opportunities.”

She went on to note that they have a prime location in the Bay Area, the right catalyst company, a cluster of support industries, mass transit infrastructure being completed and they are in the literal shadow of Silicon Valley. And I thought to myself… but we have UC Davis and the emergence of a whole new industry in AgTech. And though Davis could probably have never planned 30 or 40 years ago to find itself at this interesting intersection of a tech revolution in an industry that is quite literally in its DNA, we are fortunate to be here and we should likely consider it on those merits and not accidently or purposefully squander the opportunity bestowed on our community.

To me, it is one thing to make something better and more sustainable (like cars), but that is a limited market no matter what the merits. But food… now that is a daily survival need, one that is growing and is already in short supply. With a population that is expected to reach 9 billion by 2050 and that should be receiving (ideally) multiple meals a day, food production and distribution is literally a market without end.

As we in Davis are well aware, the business of food production is much more than just a few seeds in the ground, water and sunlight, growth, tending and harvest. And though many of us enjoy the simplicity of that cycle in our own backyards, the science, engineering, and art that go in to modern global food production are staggering in their scope.

Davis is blessed to be the home of some of the world’s best researchers and companies that are making better food production, cultivation, and distribution a reality. From seed companies, to robotics, to pest management, to manufacturing, we have the right people working on the challenges ahead.

So what does interest from three very different teams in creating an innovation park mean? I would suggest that it means that there is a lot of attention on Davis to provide spaces for these companies that already exist, and to create opportunities for companies we haven’t even yet thought about that will come from research in and around the university.

Creating a community asset that supports innovation means that researchers in Davis have a higher likelihood to solve some of the world’s greatest agricultural challenges. As technologies continue to combine in new and interesting ways (e.g. plowing a field now consists of natural science, engineering, IT, and mechanical innovations), we are best served as a global community by ensuring that ideas and concepts have the greatest opportunity to literally ‘run into each other’ to create new innovations.

As the community wrestles with the concepts being put forth and discusses the merits of each, I encourage us not to lose sight of the fact that we are considerably fortunate to have this kind of attention. At a time when the City of Davis is looking for solutions to the ongoing revenue issues that are needed to pay for the amenities that make Davis special, we have been given several options for at least part of that solution set.

Sure, it’s an attitude shift to go from a mindset of suspicion and mistrust of development proponents. But at a minimum, we should recognize that having the opportunity to sort through the three concepts and figure out what will work for Davis is a good problem to have… one that may provide some solutions to our local revenue needs while quite possibly creating the conditions that could lead to solutions of some of the world’s biggest issues.

Thanks for considering my ideas. Your thoughts are always welcome. My email is rwhite@cityofdavis.org if you choose to email me directly.

10 thoughts on “What an Incredible Problem to Have”