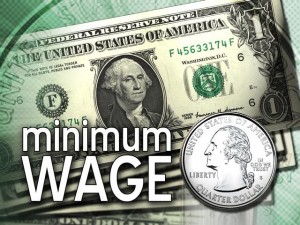 Today California’s minimum wage rises from $8 to $9 per hour, but workers and advocates say it is not enough. This is the first time California has seen an increase in six years and the wages are scheduled to rise another dollar by January 1, 2016.

However, critics argue that, even with the 12.5 percent increase today, minimum wage workers still will not earn a living wage. Last week, Assembly Democrats ended up bringing down a minimum wage proposal that would have raised costs up to $13 an hour.

As the Sacramento Business Journal reported on Thursday, “Business groups were amazed — and delighted — to watch a proposed minimum wage hike to $13 an hour die in an Assembly labor committee, a chamber long considered union territory.”

They quoted Salinas area Democrat Luis Alejo, who authored the bill that is taking effect today and who was one of two Democrats to abstain from the vote, killing the bill, where he said “in an interview that raising minimum wage was his top priority upon entering the Assembly in 2010. His bill, which raises the state’s wage floor to $9 next week and will increase it again to $10 in 2016, took three years to push through the Legislature. It was a product of negotiations between the governor, business groups and organized labor.”

He told the Business Journal that this year’s bill would have “violated” the deal struck a year ago. “When you’re trying to negotiate a deal and reach consensus, you have to keep your word,” he said.

Senate Bill 935, authored by Senator Mark Leno, would have raised the minimum wage in three steps, starting at $11 an hour in 2015 and increasing an additional $1 per hour in both 2016 and 2017. Beginning in 2018, the minimum wage would be adjusted annually to the rate of inflation. SB 935 was co-sponsored by the Women’s Foundation of California and SEIU California State Council.

“Increasing the minimum wage is critically important to millions of hard-working Californians and their families who live in poverty and are forced to rely on the state’s social safety net programs despite being employed full time,” said Senator Leno, D-San Francisco. “By giving low-income workers the pay and respect they deserve, we will also address the growing inequality within our communities, which is a roadblock to economic recovery and a drain on already limited taxpayer resources.”

According to a release from Senator Leno’s office, “The Census Bureau reports that nearly a quarter of California’s 38 million residents, or 24 percent, live in poverty. An employee working full time earning $8 an hour brings home just $15,360 annually before taxes. The federal poverty level for a family of four with a single-wage earner is $23,850. San Francisco already has a higher minimum wage than the state and is considering raising it even higher. Los Angeles is also considering raising its minimum wage for hotel workers to $15.37 per hour.”

It adds, “Women are disproportionately impacted by the minimum wage. About six in 10 minimum wage workers in California are women, according to the National Women’s Law Center.”

“Not only will the proposed increase stabilize women, it will stabilize families and stimulate the economy,” said Judy Patrick, President and CEO of the Women’s Foundation of California. “Because women are disproportionately minimum wage workers, raising the minimum wage would help close the gender wage gap. In addition, six out of 10 of the women earning minimum wage are breadwinners. Yet, despite working hard, because of the high cost of living in California, these women and their families are living in poverty. The long-term impact of this poverty is very costly to the state and to these families.”

The release continues, “Importantly, Gov. Jerry Brown took a necessary first step of signing legislation that brings the state’s lowest wage up to $9 per hour later this year and $10 per hour in 2016. It would, though, still fall short of both the federal and give Californians less purchasing power than the state’s minimum wage did in 1968. That year’s minimum wage, if adjusted for inflation, would be worth $10.77 per hour today. Last year’s action also did not include the critical step of requiring automatic increases in the minimum wage to protect future earnings against inflation.”

The release notes, “New analysis from Human Impact Partners finds that raising the state’s current minimum wage to $13 by 2017 would significantly benefit the health and well-being of low-income Californians and their families.”

“A person’s income not only directly affects the ability to meet material needs, but it also impacts health through access to health care, quality and affordable neighborhoods, child health and development, chronic stress and interpersonal relationships,” said Bruce Pomer, executive director of the Health Officers Association of California. “As a result, the 7.5 million lower-income Californians who could expect an increase in family income as a result of this legislation would also experience fewer chronic diseases and disabilities, less hunger, and lower rates of smoking, obesity and depression.”

It adds, “SB 935 is supported by a broad coalition of groups, including consumer advocacy, human rights, labor, government, health care and social worker organizations. It will be heard next in Assembly policy committees.”

In Davis, the push to put a $15/hour minimum wage ordinance on the ballot stalled after it generated a lot of controversy and concern.

But if the state minimum wage would go up to $13 an hour and Davis has a higher cost of living than other areas, does that put it back on the map?

Proponents argue, “It’s time to bring a $15/hr minimum wage to Davis. We can change things. Right now, the minimum wage is just $8 per hour. This translates to less than $17,000 per year. We’re trying to put an initiative on ballot for a $15 minimum wage in Davis. This ensures that nobody who works full time should have to live in poverty.”

Another issue is whether a city should be the one making minimum wage laws.

However, as one report indicates, cities around the state are moving to set their own minimum wages because the state’s law falls short of providing workers with a living wage.

One report notes that a living wage, the ability to pay for needed food, housing, health care, transportation and other basic necessities of life and other resources, is still outside of the reach of many workers.

“Oakland’s estimated living wage for a single worker is $11.51 an hour and San Jose’s is $12.01, according to a calculator developed by poverty researchers at the Massachusetts Institute of Technology,” the Bay Area News Group reported. “By another measure, an average of 20.3 percent of Oakland residents lived below the poverty line from 2008 to 2012, the Census Bureau reports; in San Jose, it was 11.7 percent.”

The business community on the whole has opposed such increases, arguing they drive up costs and could cost jobs in an economic environment many still consider fragile.