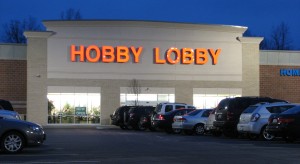 “Congress shall make no law respecting an establishment of religion… “

While the recent Supreme Court decision in Burell vs Hobby Lobby may not abridge the technical wording of this amendment, it certainly contradicts its spirit.

Quoting from the majority decision;

“The Religious Freedom Restoration Act of 1993 (RFRA) prohibits the “Government [from] substantially burden[ing] a person’s exercise of religion even if the burden results from a rule of general applicability” unless the Government “demonstrates that application of the burden to the person—(1) is in furtherance of a compelling governmental interest; and (2) is the least restrictive means of furthering that compelling governmental interest.”

Quoting from the majority opinion by Justice Alito: “The owners of the businesses have religious objections to abortion, and according to their religious beliefs the four contraceptive methods at issue are abortifacients.”

People are certainly entitled to their own religious beliefs. However, they are not entitled to their own facts. Of the two IUDs cited as abortifacients, only one, the Paraguard could by any stretch of the imagination be considered an abortifacient since it can be used as emergency contraception. This is also true for the preparation known as Plan B. The other IUD, the Mirena has no known abortifacient action and so is not approved for emergency contraception. So what the Supreme Court has actually decided is that that the religious objection to abortion of the owners can be extrapolated to their erroneous beliefs about the mechanisms of action and therefore should take precedence over the demonstrated biological facts. Would the Supreme Court have taken the same stance if the employer were a company founded by Jehovah’s Witnesses and the procedure that they were refusing to insure was a blood transfusion, as suggested by Justice Ginsburg in her dissent. The majority states this would not necessarily apply. But why not ? What would make one genuinely held religious belief superior to another? This seems to me to be skating extremely close to interpreting law so as to respect the establishment of a certain type of religion, namely the Christian faith. Would the court have upheld the genuinely held beliefs of other religious groups, such as Muslims who legitimately practice Sharia law as part of their religious doctrine?

Justice Alito continues: “Nor do we hold, as the dissent implies, that such corporations have free rein to take steps that impose “disadvantages . . . on others” or that require “the general public [to] pick up the tab.”

This statement is clearly contradicted by the portion of the decision that states the HHS has the less restrictive option of providing direct coverage for women who are unable to obtain contraception through their employer’s health plan. If the government is providing the coverage, who other than the general public through their tax dollars does Justice Alito believe is “picking up the tab?”

And if neither their employer nor the general public are to “pick up the tab”, then most certainly these women are disadvantaged both by comparison to other women and to their male counterparts working at the same company, having the same insurance, but without the same religious restrictions imposed on their personal medical options by their employer.

Justice Ginsburg continued: “Approving some religious claims while deeming others unworthy of accommodation could be ‘perceived as favoring one religion over another,’ the very risk the [Constitution’s] Establishment Clause was designed to preclude.”

In my opinion Justice Ginsburg has this exactly right. I also believe that the five Justices in the majority in this case were unable to see past their own religious and ideological biases. I agree with Justice Alito’s suggestion that had this case been about blood transfusion, or pork containing products that it would have been decided in favor of the HHS. I believe that this would have occurred because the majority justices would not have connected so fundamentally with the religious beliefs being expressed. While each of the justices is entitled to their own religious beliefs, these should not be allowed to color their views of the issues before them thus leading to a de facto respect for a very specific religious establishment, namely a specific belief of the Christian faith.

I believe our First Amendment clearly forbids the making of laws respecting an establishment of religion. Since this is clear, should it then not follow that the Supreme Court should not interpret existing law so as to respect an establishment of religion? It would seem clear to me that this is the effect of the current majority decision and that this decision should itself be considered unconstitutional. My appreciation to Judge Ginsburg for her clear and well reasoned opposition to this majority decision.

Share:
Tags:AbortionContraceptionsFirst AmendmentHobby LobbyUS Supreme Court
Previous : Thank you to our advertisers in 2014
Next : Analysis: Is Measure J’s Impact Overstated?

752 thoughts on “A Controversial Hobby”