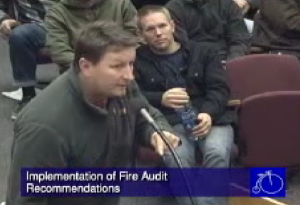 Firefighters Should Stop Being Part of the Problem and Start Being Part of Renewing This Community:  It has been a surprisingly heavy agenda here in late June and early July, so I am a bit late responding to this matter. A couple of weeks ago on a Friday evening, I went to the Davis Police Station to do a ride along with the Davis Police.

Outside of the station, two firefighters were dropping something off to the police when one of them, before returning to the rescue apparatus, attempted to confront me. He asked why I was such a negative force in this community, that they do a lot of good things, and I should write about them sometimes.

This is the second such confrontation I have had with firefighters, the last one being in the restroom at City Hall. I thought about what he said to me, and I realized there are a lot things that need to be said. I am happy to sit down and talk with anyone, any time, but unfortunately, I don’t see that really bearing fruit.

The first point that needs to be made is that the Vanguard has not put down the work of individual firefighters. Going back to the Aaronson Fire Report in 2008, there has been nothing but good praise for the professional work product that the firefighters in Davis perform.

The complaints that the Vanguard has had against the firefighters has been with the union operations. There are documented reports about harassment and a hostile work environment in the fire station, affecting firefighters who do not tow the union company line. We have documented cases where that extends to the community – whether it be attempts of retaliation against individuals who speak out, UC Davis firefighters who have spoken out, or businesses that associated with the Vanguard.

A second series of complaints has been about firefighter compensation, opposition to reform efforts and holdout on contracts in 2012-13.

Finally, we have had a series on the undue influence of the firefighters’ union, who utilized the bundling of at times 40 $100 contributions to enhance its influence on the city council. Those were joined by as much as $8000 in independent expenditures. That helped to elect a council that was beholden to the firefighters and their issues – they voted on expensive salary and benefit increases, expensive battalion chief models, and most ominously to not read the full Aaronson report.

While the firefighters want a positive story in the public realm, we probably could find numerous positive stories to talk about. Unfortunately, they want to dismiss and diminish the harm that they have caused the community in just the last 18 months.

When they, along with DCEA, held out on contracts, it ended up costing the community roughly half a million dollars. That was money that might have gone to infrastructure upgrades, that instead have had to be bolstered by sales taxes increases and more budget cuts.

The efforts to fire city manager Steve Pinkerton led perhaps to his decision to leave in February. Since May, the city has been operating with an interim city manager – that has caused all sorts of problems for the city and may ultimately lead to the failure of the parcel tax.

Ironically, these problems could end up resulting in another round of pay cuts and it is possible, since the firefighters’ union did not sign a three-year contract, that the next round of cuts will land on them, this year.

In the meantime, the city has stumbled on a number of ventures that could produce additional revenue for the city – the question is really how much the loss of Steve Pinkerton will end up harming the entire city.

And yet, the firefighters’ union not only helped push him out but they celebrated on his grave. It is hard to gain a positive view of a group that has that poor a sense of political tact.

The firefighters fought the reforms that were implemented for almost a year. The council finally pushed through fire staffing cuts mid-2013 and hired a full-time chief through the shared services agreement at the end of 2013.

On July 1, without fanfare, that program was automatically renewed until December 31, 2015.

The firefighter who confronted me a few weeks ago did recognize that there were political reasons for the attacks on fire, as he characterized it. I wonder how much he really understood.

It was in 2008 that the reality set in that the only way to get reform implemented on the fiscal and political fronts was to break the lock on council that the firefighters had. From 2002 to 2008, the firefighters elected 7 of their 9 endorsed candidates. Only Lamar Heystek in 2006 and Sue Greenwald in 2008 won without fire backing.

The key turning point was in 2010, when Joe Krovoza and Rochelle Swanson won while eschewing fire support. That repeated itself in 2012 and 2014. Since 2010, no one backed by the firefighters, with endorsements and money, has prevailed.

In so doing, we were able to elect a council that would take on structural deficits, and push for much stronger contracts that eliminated cafeteria cash outs and increased worker shares of pensions and retiree health.

The result is that more people have the opportunity to run for office and compete and those who win are usually those best organized who can walk the precincts.

I understand that the individual firefighters work hard and deserve our respect. They play a vital role in our community. The problem is that the conduct of these same firefighters within the confines of their union has been detrimental to this community.

When they held sway and influence, we got things like four on an engine, 3% at 50, and a 36% pay increase in 2005 after the voters passed a half-cent sales tax.

When we have attempted reform, they have tried to block it.

Firefighters want positive stories – then they need to be part of the solution in this community, they need to help us move forward, not get stuck in the past.

Someone sent me this story from 2011 – it was from Solana Beach and their firefighters’ union president and 15 uniformed firefighters went to the council meeting “to publicly apologize to City Manager David Ott for circulating a letter accusing Ott of endangering the public by trying to reduce fire staffing.”

“The City Council and city manager put its trust in its firefighters, and its trust that we hold to the highest regard. During last month, our actions damaged this trust.

“David Ott is a man who has dedicated his life to public service, and he is a man who truly has a servant’s heart. Our membership displayed a lack of judgment by questioning his character, and in the process, hurt him to the core. So for this, we are truly sorry.”

Can you imagine that happening here? I certainly can’t. Losing our city manager was a huge blow to this community; if the firefighters do not recognize it, then once again they are being part of the problem, not part of the solution.

Share:
Tags:Bobby WeistBudgetCity of DavisFirefightersSteve Pinkerton
Previous : Eye on the Courts: Is 25 to Life for Talamantes Justice?
Next : Analysis: Will City Staff Allow 87-13 to Go Forward?

58 thoughts on “An Open Letter to the Firefighters Local 3494”