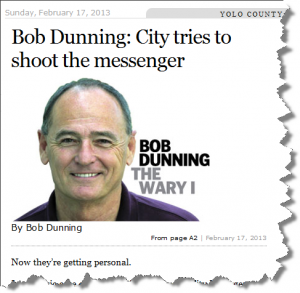 I recall a discussion back in college about the “big lie,” which is an interesting propaganda tactic where the concept was that no one could believe that someone could have the audacity to distort the truth so infamously. For me, the bigger problem isn’t the big lie in the modern age, though it still exists – it is the half-truth.

The problem with the half-truth that makes it so pernicious is that there is an underlying element of accuracy that prevents it from being fully debunked.

In the past few weeks, the Vanguard has been working on some critical outreach to the community, both on these pages and behind the scenes. Among the biggest obstacles we have in this community is to overcome the wave of half-truths and misperceptions on the part of the public.

That task becomes more challenging when a prominent columnist continues to pump them out at an alarming rate.

So let us address some of these.

“… by 2019, when water rates reach a whopping five bucks per ccf, Davis is likely to look more like a town in the Mojave Desert than a once-green town that cherished its beautiful lawns and mature trees … there is justifiable concern that those rates will drive some folks out of business, or at least out of town … safe to say, had the Davis City Council had the courage to put those specific rates on the ballot along with the surface water project in March of 2013, both the rates and the project would have failed …”

If there is an element of truth to this, it lies with the conflation of multiple problems into one. The water rates are going up. But the bigger driver may be the state drought and water shortage. We have had droughts in California in the past, but this one might be different. The Center for Investigative Reporting yesterday wrote, “By this spring, California had experienced its driest three-year stretch since 1895. San Francisco, Los Angeles, Sacramento and Fresno logged their driest year ever recorded in 2013.”

They continue: “California’s climate varies tremendously, from temperate rainforests on the North Coast to the extreme aridity of Death Valley. Conditions now are so dry that all of the state is considered to be in a drought. More than 80 percent of the state is in extreme or exceptional drought, according to the United States Drought Monitor.”

Fear-mongering over water rates certainly is not going to help this, but if the city moves toward different sorts of ground cover, the drought and not water rates will be the primary driver. In San Luis Obispo, a seven-year drought in the late 1980s and early 1990s changed the way a lot of people went about ground cover, but while the planting patterns of individual properties changed, it did not destroy the beauty of that community.

“… when I headed down the street to Grocery Outlet to check for myself, I discovered the asking price for these thick plastic bags was 15 cents … how that sits with the Bag Police remains to be seen, given that these bags are, after all, made of plastic …”

An easy Google search reveals the following from the city’s webpage on the Carryout Bag Ordinance: “Thicker plastic bags may still be available at some stores if the bags meet the statewide standard of ‘reusable bags.’ As with all bags offered at checkout though, stores will be charging a minimum of 10 cents per bag. “

“For the mathematically challenged, that 6 percent of the project’s output means UC Davis actually will be receiving 15 percent of Davis’ portion of that coveted river water we will all be paying so dearly for … given that there’s supposedly a severe shortage of water out there, it’s hard to understand why city officials are so positively giddy about the prospect of allowing UC Davis to take 1.8 million gallons of water a day while dropping the city of Davis’ allotment to 10.2 million gallons a day …”

The Enterprise, in its cheers and jeers section, offers a different take: “CHEERS to UC Davis’ decision to join the Woodland-Davis surface water project, investing $20 million in exchange for 6 percent of the total water that will be drawn from the Sacramento River, treated and piped to the two communities.

“Having the university share the costs for the project and the pipelines will reduce Davis’ share of the cost by $11 million and Woodland’s by $1.2 million. Those savings eventually will make their way to water customers.”

“As I understand it, Davis will receive around $11 million of the money UC Davis is paying for water rights. When will we, the ratepayers, see a reduction on our bills?”

“Now that the city is in the business of selling water, it’s anyone’s guess what will happen to all those millions of dollars sailing our way. Safe to say, though, the city isn’t talking about canceling a parcel tax vote anytime soon.”

It is safe to say that the $11 million will have no impact on whether or not the city puts a parcel tax forward. There is a belief in city hall that, with the savings from UC Davis’ entry and the much larger savings if the city gets SRF low interest loans, the savings will be passed on to the ratepayers.

However, none of that has anything to do with the need for a parcel tax to repair the roads. Water rate money cannot be used for those purposes and even if it could, $11 million is just a drop in the bucket compared to the total needs.

“It appears that those submitting applications for the job cannot budget living in our fair city on $188,000/year. Wonder how many citizens are having the same tough time figuring such out.”

“While I have heard of a few of my less fortunate East Davis neighbors scraping by on less than $188,000 a year, they generally have only one vehicle and their children are invariably shabbily dressed. The City Council is concerned that if the new city manager’s pay is not increased to a range well in excess of $200,000, he or she may be forced to live in Woodland or West Sacramento, and probably will be eligible for public assistance as well. That would certainly not be in keeping with our national reputation.”

The Sacramento Business Journal reported yesterday that Davis got “no takers for $188K city manager pay.”

More importantly, here is what other cities are paying for city managers…

“Over the weekend my husband and I decided to shop in Woodland to see if they were as insane as Davis is. I felt like I had been blasted back into history. Target bagged my items in the despicable plastic bags and didn’t charge me. The grocery store did the same.”

Meanwhile I traveled to the East Bay and South Bay recently and none of those communities have plastic bags. Does Davis aspire to be more like Woodland or more like the rest of the state?

“I went on vacation for a week in July. I asked that The Davis Enterprise hold my papers for that week. I requested that they save the ones that I missed so I could catch up on all the great news in Davis while I was gone. Much to my surprise, I returned to find the bundles left in my mailbox were wrapped in a forbidden plastic bag. Gotta love it.”

“Our litigation-wary City Council, fearful of violating the freedom of the press provisions of the First Amendment to the U.S. Constitution, wisely exempted The Davis Enterprise from the plastic bag ban ordinance. If it ever rains again, look for plastic bags brimming with local news landing on driveways all over town.”

Humor is great, but how about pointing out that the city ordinance only covers single-use plastic grocery bags and not other forms of bags. Also it might be nice to note that bags are not illegal in the city of Davis, the ordinance only speaks to their distribution by retail and restaurants, not possession.

“Now that we have to bring our own cloth bags, I won’t be able to wash my soiled bags very frequently, since this would cause my water bill to go up steeply.”

So you can’t throw your bags into the wash with the rest of your clothes?

71 thoughts on “Analysis: It’s No Wonder Why People Are Confused…”