Last week, the city of Davis and UC Davis announced that UC Davis was exercising its option to contract for water from the Woodland-Davis Clean Water Project, continuing its participation in the partnership. When the project is completed, the university will receive 2,000 acre feet of water per year, or about 6 percent of the total available.

However, considerable questions arose at that time as to what that actually meant in terms of cost and structure.

The Vanguard contacted WDCWA General Manager Dennis Diemer to clarify some of these questions.

He explained, “The regional project cost for UCD is $12.3 million, this savings is distributed to Davis at $11.0 million. The remaining $8.0 million is the estimate for the local facility infrastructure costs to get water to the UCD campus from the Davis City Limits on Pole Line Rd.”

Furthermore, UC Davis, he said, “will pay 6% of the fixed operating costs and their portion of the monthly variable, electricity, and pass-through chemical costs.”

There has also been some question as to whether UC Davis is merely another ratepayer class or a partner in the project.

Mr. Diemer explained, “[UC Davis is] a project participant and will pay their proportional share of ongoing and previous costs required to administer the project.”

The following table was from an April presentation by Dennis Diemer to the WDCWA board. 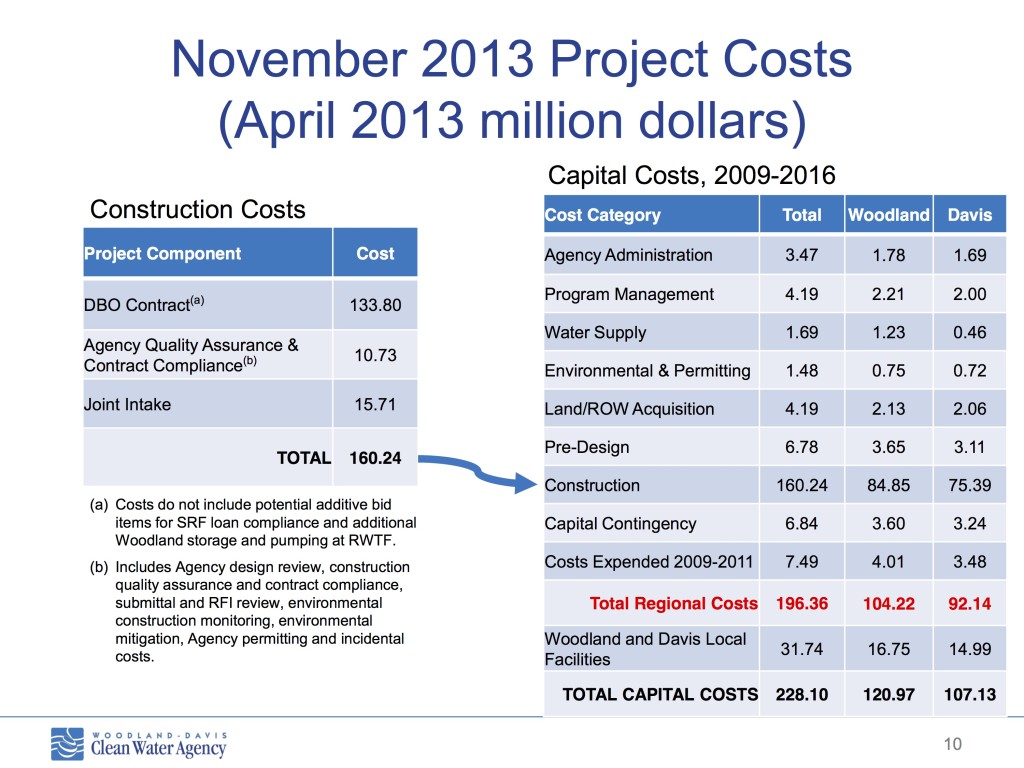 The city of Davis, after getting numerous questions, also put out a statement on Tuesday.

According to their statement, “In response to the recent announcement by UCD to participate in the Davis Woodland Water Supply Project, the City of Davis intends to retain the rate consultant, Bartle Wells Associates, to analyze the potential impact of the University’s decision on water rates.”

The city explained, “UCD’s choice to use 1.8 million gallons per day (MGD) in surface water supply from the Project will result in a reduction in the amount of water that the City receives from the project, reducing the City’s participation by about $11 million.”

“Bartle Wells will analyze the impact of the reduction in overall project costs on proposed water bills for residential, commercial and irrigation uses,” the city continued. “The reduction in total project costs has the potential to influence financing opportunities for the City and impact cash flow requirements. The City will also have to recognize the impact on operations costs and opportunities from soon-to-be-executed operations agreements with the University.”

The city stated, “In addition the City will ultimately have to determine how the 1.8MGD, no longer available to City residents, will be replaced through the development of alternative sources or reduced through demand side management.”

The city concluded, “The Bartle Wells study will be presented to the Davis City Council during the public hearing on water rates currently scheduled for September 16, 2014.”

While the arrangement will cause the city to re-think how it delivers water, mostly they see it as a way to further reduce costs. However, officials that the Vanguard spoke to said that, while this will reduce the city’s cost on the capital project by $11 million, that savings pales in comparison to savings on interest rates should the city qualify for the State Revolving Fund low interest loans.

“We are very excited that UC Davis has decided to exercise its option to participate in the surface water project,” Davis Mayor Dan Wolk said of the campus announcement. “Continued campus participation reinforces the strong ties between the university, Davis and the greater Yolo community and reduces facility costs for the other partners, particularly the city of Davis,” he said.

The project, administered by a joint authority including the cities of Woodland and Davis, UC Davis and Yolo County, will draw and treat water from the Sacramento river and deliver it to both cities and the university, replacing supply from existing groundwater wells. Construction is currently underway for the regional water treatment plant, raw and treated water pipelines and intake facilities.  Construction of local pipelines to deliver the treated water to Davis and UC Davis is set to begin in April 2015, with the first water deliveries by September 2016.

“After extensive analysis and careful consideration, the campus decided to exercise its option” said Sid England, assistant vice chancellor for environmental stewardship and sustainability. “The advantages to the campus are clear, including improved quality of water, less reliance on groundwater, and an additional supply of water far into the future,” he said.  “A high quality, reliable water supply will support campus teaching and research for many generations.”

UC Davis has been a participant in the surface water project since the original filing of a water rights application in 1994. In 2009, the university transferred its water rights to the Woodland-Davis Clean Water Agency concurrent with an option to receive the treated water back under a contract with the agency. The university has now decided to exercise that option in advance of the project start-up, so that the university can partner with the city of Davis on construction of the required pipelines through the city.

The new plant will deliver 30 million of gallons of surface water per day.  Approximately 18 million gallons are currently allocated to Woodland and 12 million to Davis. As outlined in the original agreement, UC Davis’ water apportionment will come from the city of Davis’ share.

The capital cost to the university will be $20 million, including both contributions to the overall project and local distribution pipelines. The university’s investment will benefit both cities by reducing overall project costs to the city of Davis by $11 million (about 9 percent) and Woodland’s costs by $1.2 million. In addition to reducing project costs, campus participation is likely to give the city of Davis greater flexibility in how it manages its supply and may enhance the ability to explore alternative water conservation measures.

Davis, Woodland and the UC Davis campus currently receive all their domestic water from groundwater wells. The extended drought has highlighted concerns with a reliance on a single source of water. Using surface water sources brings increased water quality, long-term reliability and flexibility to the overall supply.