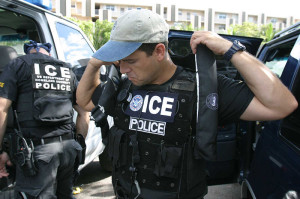 Yesterday afternoon it was reported that the Los Angeles Police Department is “no longer heeding federal immigration requests to hold inmates who might be deportable past their jail terms, unless a judge has vetted the request, Mayor Eric Garcetti announced Monday alongside a cheering crowd of immigrant advocates,” the LA Times reported.

“The federal government is in charge of enforcing federal immigration laws — not us at the local level,” Mayor Garcetti said. “And that responsibility can’t be forced onto local law enforcement officials who already have stretched budgets.”

The Times reports, “Los Angeles joins scores of other cities and counties that have stopped the practice after a federal court ruling in April. That ruling found that an Oregon county was liable for damages after holding an inmate beyond her release date so that she could be transferred to Immigration and Customs Enforcement.”

The Times continues, “Spurred by that ruling, Los Angeles officials decided to reexamine their approach to the federal requests earlier this year. LAPD Chief Charlie Beck declared that the new approach would foster the community’s trust in the police department, encouraging more people to report crimes.”

Chief Beck said that “crime had continued to fall over the last three years in Los Angeles as the police department ‘systematically reduced’ the number of detention requests that it honored. So far this year, the department received 773 such requests and had honored roughly 300, Beck told the crowd.”

“People ask — will this affect crime in Los Angeles? My answer is no,” Chief Beck said Monday at a news conference. He later added, “This is not something for people to be concerned about, about serious criminals being released, because they will not.”

Los Angeles is only the latest city to balk at cooperation with ICE.

In 2007, the Davis City Council, comprised of Mayor Sue Greenwald, Mayor Pro Tem Ruth Asmundson and Councilmembers Lamar Heystek, Don Saylor and Stephen Souza, unanimously passed Resolution 07-162 which reaffirmed the City of Davis as a City of Sanctuary. In 1986, the city had declared itself a City of Sanctuary, “specific to refugees fleeing persecution in El Salvador and Guatemala.”

The resolution reads, “WHEREAS, the City Council of the City of Davis has also passed Resolution 07-123, which states that the City of Davis disapproves of and condemns the civil rights violations caused by conducting raids for the purpose of deportation of undocumented foreign nationals; and WHEREAS, much of the public discourse surrounding immigration has taken on a tone that ranges from irrational to racist, including the use of language such as ‘illegal’ and ‘alien’ to describe immigrants, which has a dehumanizing effect; and WHEREAS, the City of Davis supports a fair and just reform to the immigration process…”

It affirms “its declaration as a City of Sanctuary, broadening its scope to include undocumented workers and immigrants from all backgrounds.”

It notes that “the City of Davis supports a just and fair immigration reform that respects individuals and allows proper and affordable navigation channels for individuals to become documented workers in, permanent residents of and/or naturalized citizens of the United States and affirms the basic human rights and dignity of every human being.”

In May 2011, a national news conference was held by law enforcement officials, including Yolo County Sheriff Ed Prieto, in which they laid out their concerns about what was then a new federal program called Secure Communities.

The idea behind Secure Communities was for local law enforcement to have the ability to share the fingerprints of those arrested with Immigration and Customs Enforcement (ICE).  It was touted as a way to help identify and deport illegal immigrants convicted of serious crimes.

Instead, it is now coming under fire because it has been used to deport those arrested but not convicted of a crime, or convicted of minor crimes or even traffic violations.

According to the news conference, only 12,000 of the 38,828 people in California deported through the Secure Communities program between May 2009 and March 2011 were charged with or convicted of major violent offense.  However, another 11,000 were classified as non-criminal deportees.

Sheriff Prieto said he was unaware for a long time that the program was even in place.  According to the LA Times article, he said yesterday that he is now looking for ways to get out of it.

According to another report, Sheriff Prieto “acknowledged that many people, including some in his own command staff, have no objections to deporting anyone who is discovered to be in the country illegally. But he is instructing his department to notify ICE only of prisoners in the country illegally who are known to have committed serious offenses.”

Different local entities are looking to deal with this in different ways.  For instance, LA County Sheriff Lee Baca is a strong proponent of the federal program.  He told the LA Times, “The program enables law enforcement agencies to identify criminals who are here illegally and allows the federal government to target those who have committed serious crimes for deportation so they no longer pose a threat to our communities.”

Sheriff Prieto did not return a message from the Vanguard on Monday asking for clarification on current Yolo County Sheriff policies.