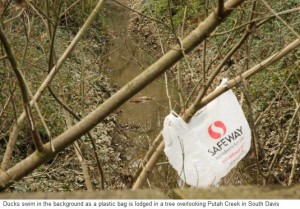 A little over a year ago, I went on a late night run for snacks and drinks in San Luis Obispo. When we got to the part about whether I wanted a bag, I was about to say yes when the cashier noted it was a ten-cent charge for a paper bag. I hesitated and decided to carry four drinks and snacks loose across the street.

It wasn’t a very good idea, but it did prompt the friendly cashier to note that most people are not willing to pay the ten cents for a paper bag, even though it is only ten cents.

So last week, as I stopped at Safeway to get my lunch, there was a line of people in front of me. None of them brought reusable bags. No one was willing to pay the ten cents for the paper bag. Interesting group behavior.

Over the course of the week, people’s behavior has changed somewhat. I have seen more reusable bags. I have seen people who have brought their old plastic bags for reuse – although clearly that is not a strategy that will last long. The ones I have seen are increasingly in bad shape.

At some point I’m sure I will purchase some reusable bags and actually place them where I can use them. However in the shorter term, it is remarkable how little the bag ban has impacted things, at least on my end. I have so far used just one paper bag and have probably saved using ten plastic bags that I really didn’t need.

Somehow 110 other communities have managed ways to deal without single-use carryout bags. Yes, there are secondary uses for some of these bags, but the number of people using grocery bags to carry dog poop is probably small compared to the number of grocery bags overall. There are alternatives, ranging from the re-use of other types of plastic bags to smaller and lighter weight biodegradable doggy bags.

We are not banning all bags, either. We have only banned one type – the single-use carryout bag. Contrary to attempts at humor, there is no law against people using these bags, in fact the city has put out messages on creative re-use of these bags. What is not permitted are merchants in Davis dispensing them.

Moreover, the city did a survey of five hundred shoppers at six large grocery stores in August 2012. What they found was interesting. “On average, 49.5% of carryout bags used were single use plastic, 20% were paper, 17.2% were reusable bags and 13.3% opted not to use bags.”

In other words, the survey showed that Davis residents already use single-use carryout plastic bags at rates far lower than other jurisdictions and therefore the impact of the ordinance on the typical consumer would be far less.

However, do not let that persuade you that the ordinance was not necessary. The study found, “The use of single use carryout bags (plastic, paper, and biodegradable) has identified negative environmental impacts, including GHG emissions, litter, water consumption, solid waste generation and effects on wildlife. Despite their lightweight and compact characteristics, plastic bags disproportionately impact the solid waste and recycling stream and persist in the environment even after they have broken down.”

The study added, “Even when plastic bags are disposed of properly, they often become litter due to their aerodynamic nature. The bags can be blown out of landfills by the wind and can easily be blown from garbage sources within the City prior to collection. Plastic litter not only causes visual blight, but can potentially harm wildlife.”

Bottom line is that the city was able to implement a 90 percent plastic bag reduction through this ordinance. That means, yes, go ahead and use other plastic bags if you must to do things such as dispose of dog waste or baby waste. Use your plastic bag liners for your garbage. The idea here is that the use of grocery bags dwarfs all other uses for plastic bags and, even if there is some offset, we are achieving an overall waste reduction.

At some point I’m sure I will pony up for some reusable bags. I chuckle with humor at people who are concerned about their widespread use. My folks in San Luis Obispo have been using them for years. It’s not that difficult to care for them – throw them in with the rest of your wash every so often.

In the meantime, a dime here or there is a small cost to be reminded that paper and resources are not free. Now, if we could just get rid of the unnecessary product packaging, we could really reduce our waste.

180 thoughts on “Commentary: A Bagless Week in Davis”