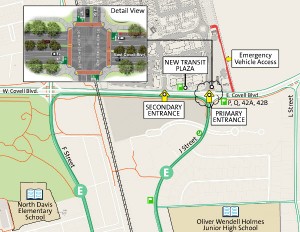 A few days ago, a press release came out of the city that there was a traffic alert for Road 102. The city laid out that there was going to be a major effort to haul dirt created by the Surface Water Treatment Plant to the Cannery Project.

The city reports, “The Contractor, CH2M Hill, will be hauling approx. 80,000 cubic yards of soil for use at the Cannery which equates to about 10,000 truckloads.  CH2M Hill, expects that at its peak, a truck will be leaving the Surface Water Treatment Plant every 2-3 minutes, with 20-30 trucks per hour from 7am – 4:30 pm.”

They continued, “Expect traffic delays of up to 10 minutes on County Road 102 due to northbound lane #2 closure at the intersection of County Road 24 (East Gibson) and County Road 102. Motorists are asked to be on the lookout for construction traffic and to use detours and/or allow extra time to reach their destinations.  Traffic signage will be posted on County Road 102.”

It makes some sense that the surface water project is producing extra dirt while the Cannery project sites needs dirt to fill in and level the site. But the impact is massive – 10,000 truckloads, 20 or 30 per hour, all day, perhaps though late August.

I was curious so I examined the Environmental Impact Report for the Cannery and found no mention of the impact of 10,000 truckloads of dirt. There was a mention on page 326 of the EIR, “The project applicant shall implement the following dust control measures during all construction activities.”

But this is a dust impact and covers “all trucks hauling dirt, sand, or loose material.” It also interestingly notes, “All grading operations shall be suspended when wind speeds (as instantaneous gusts measured by an on‐site anemometer) exceed 25 mph and dust has the potential to adversely affect adjacent residential properties.”

There was also a mention about a commenter requesting information related to the import of fill material during construction.

“This information is contained in the Draft EIR. Section 3.3 of the Draft EIR contains a detailed description of construction phasing and activities. The Draft EIR indicates that up to 110,000 cubic yards of fill material would be imported to the site over a period of 30 days. A hauling truck is assumed to contain 20 cubic yards of material, and this translates to approximately 180 round trips (360 total trips) by haul trucks per day for the 30-day period.”

They then downplay the impact with, “It can be assumed that haul trips would be evenly dispersed throughout the work day, and thus not concentrated during peak AM or PM periods. Moreover, it is likely that haul trips would utilize convenient routes in and out of Davis rather than directly through the City.”

They continue arguing that this level of hauling “would not have a significant impact on traffic and circulation, as it represents far fewer trips per day… than is the case for the project under operational conditions (12,040).”

They noted at that time, “The exact location of where the fill will come from is not known at this time, it is expected that it would be from one or more commercially available sources, without disruption to environmental resources or habitat.”

Clearly, at this point, the drafters of the EIR had no idea that the city would be able to cut a deal with the Clean Water Agency for dirt, but clearly, as well, the impact of this project is far greater than was let on in the EIR analysis.

None of this appears to have been publicly discussed prior to the announcement on July 10 from the city, and the impacts on traffic, specifically on Road 102, appear to far exceed what the EIR suggested.

In the draft EIR it notes that there will be about 180 haul trips per day for 30 days. However, my math indicates that only comes to 5400, nearly half of what they are now suggested as 10,000 truckloads, 20 or 30 per hour, a truck every 2 to 3 minutes on a narrow and congested roadway.

It is still may be a good deal for all involved, but the lack of public discussion here is a bit interesting.

Share:
Tags:CanneryEIRRoad 102Traffic ImpactsWDCWA
Previous : SNOWPIERCER has arrived – in our theaters and on our border
Next : Vanguard Passes Sponsorship and Donor Goals for July 30 Fundraiser

74 thoughts on “Commentary: A Lot of Dirt, Trucks, For Cannery”