I’ll admit I was tantalized by reports of a major El Niño brewing that would effectively put an end to the state’s water crisis. But more and more the models show the El Niño either fizzling out or failing to grow further.

As the report out of UC Davis indicates, “Statistically, 2015 is likely to be another dry year in California – regardless of El Niño conditions.”

So, after reading that report, I was appalled to see Bob Dunning’s column that tongue-in-cheek makes light of the water situation and laments the browning of Davis and California.

He writes, “In an extreme case of short-sightedness, our beloved governor has ordered that the stunning green grass in Capitol Park — enjoyed by generations of Californians — be allowed to die as an example to all of us. It is, after all, California’s ‘front porch,’ as the governor describes it.”

He continues, lamenting “those super-righteous folks who are letting their lawns die as if they’re going to singlehandedly save the planet by disabling their sprinklers and not flushing the toilet.”

Worse were a few of the comments. One wrote, “We’ve gone through many droughts in California and always came out of them as droughts come in cycles. No need to over panic.”

Obviously we would not stop using water altogether. However, the idea that we should “relax” or “not panic” seems misplaced at this time.

Writes the UC Davis researchers, 2014 marked the third driest year in history, models suggest dry years in 2015 and 2016 and “the 2014 drought is responsible for the greatest absolute reduction in water availability for California agriculture ever seen.”

Maybe not panicking, but concern is critical.

The researchers note, “If the drought continues for two additional years, groundwater substitution will remain the primary response to surface water shortage, with decreases in groundwater pumping capabilities and increasing costs due to declining water levels. A continued drought also increases the vulnerability of agriculture, as urban users with largely adequate supplies in 2014 will likely buy water from agricultural areas.”

California’s economy is precarious and now we are talking a billion dollar ongoing hit to agriculture. 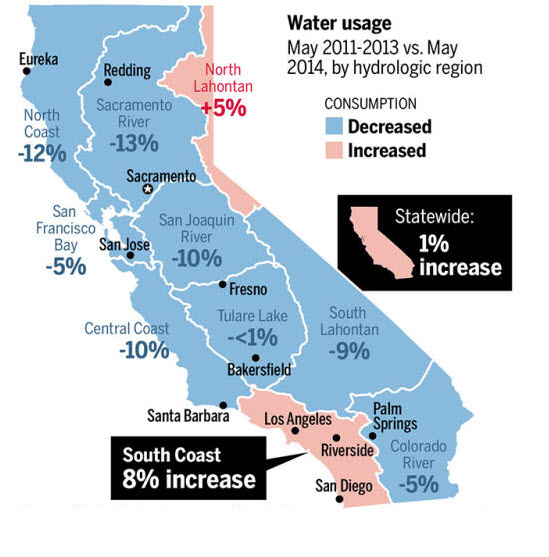 A water map was released that shows a double-digit decrease in water use in the Sacramento and San Joaquin River Valleys. However, the 8% increase in Los Angeles, Orange, Riverside and San Diego counties trumps the rest of the state, and so the state actually modestly increased water consumption by 1%.

This leads Bob Dunning today to write, “Because folks in Southern California refuse to conserve and have, in fact, actually increased their water consumption in response to our never-ending drought, those of us who pee in the back yard and take only 30-second showers once a week are going to pay the price.

“That’s the message the State Water Resources Control Board is sending with its mean-spirited threat of $500 fines for anyone who dares to let a drop of our precious water land in a nearby gutter. And yes, that edict applies in all 58 counties of this once-golden state, not just in those areas where water conservation has been mocked. Because little Tommy left the water running while brushing his teeth, mom and dad are sending all the children to their rooms.”

While there is a small point there – the reality is that the rest of the state’s 10% decrease in water use is still not enough.

I went out yesterday morning to find my neighbor – whose yard is pictured at the top of this article – still watering their driveway and the street. These are the people that need to be reined in – regardless of whether they live in northern or southern California.

But there is another problem that local communities are going to have to deal with – how do we fairly apply conservation standards?

For example, my family in San Luis Obispo, during a seven year drought in the mid-1980s to early 1990s, would take out their lawn and their water intensive trees and replace it with lower-water ground cover. They invested in drip irrigation and water saving devices.

On the other hand, their neighbor just allowed their lawn to die out. In that drought, the city officials imposed an across-the-board rationing policy – everyone had to reduce their water use in incremental amounts.

The problem is obvious in this community and others – how to apply those standards when some people have low-flow toilets, drip irrigation, and drought resistant ground cover, while other people water the streets, have swimming pools, and use 40 CCF of water each month.

Why should responsible people be forced to ration the same percentage of water as irresponsible water wasters?

That will be a challenge for a community that has just implemented what is as close to a flat rate as possible. I always favored tiered rates for this very reason.

110 thoughts on “Commentary: Drought Crisis Needs to Be Taken Seriously”