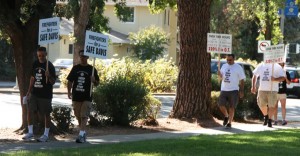 On Sunday, the Vanguard attempted to throw out, as food for thought as we go forward, the other side of the story on city manager compensation and concerns about employee morale.

There were some good responses to the issue by some of our readers.

To the idea that the employee groups have taken a huge financial hit while the public has gotten hit with only very meager sales tax increases, one reader responded, “Except of course we have been paying higher taxes all along to fund their excessively high compensation, particularly their outrageous benefits program. How much money have those benefits cost the taxpayers over the past two decades? In addition, we are now faced with $100′s of millions in greater taxes to cover the cost of infrastructure repair and maintenance because the City spent the money intended for those purposes on providing employees with even greater benefits.”

Another added, “Many of the ‘voters’ have suffered their own financial pain and have had their pay and benefits cut too. It’s been a sign of the times.”

They would later add, “Let them go if they have low morale and feel they can find something better. I’m sure the new employees will come in with a much better attitude.”

Yet another added, “A claim of low employee morale in the public sector is often heard, even in the best of economic times. The fact remains that, despite numerous studies to do so, measurement of workforce morale is elusive and has no agreed standard.”

Finally, to add one more, “I have interacted with many city staffers, and I can think of only one that was not happy, and that was because this individual was downgraded to the mailroom from operating video equipment, so the discontent expressed was perfectly understandable. The rest of the city staffers I have worked with, and there have been numerous ones, are extremely dedicated, highly satisfied with their jobs, and have a very positive attitude about getting things done. I honestly believe they were energized by CM Steve Pinkerton, who wanted the city to see possibilities, not ‘just say no’ to the pubic as happened with the previous city manager. So exactly who are these disgruntled employees the Vanguard is talking about?”

While I think these are good points, I do take a bit of issue with the last one. If I were to list out the names of specific employees I have heard from or about, I think people would be stunned. However, I do not believe that naming names serves a useful purpose and, in all fairness, that poster later agreed.

We can start with the easy ones, and there are whole classes of employees in the fire department, and in the DCEA and PASEA bargaining groups, that would fall into that category. However, I have heard increasingly about upper management, as well, and it will be very interesting to see who ends up leaving the city from the more prominent group of employees whose department we might notice (as opposed to many of the rank and file employees who work hard on a day to day basis in relative obscurity).

I should note at this point that, just because they have low morale or are disgruntled, it does not justify their feelings or even obligate the city to change course.

One problem I have is that I do not believe that a lot of these employee groups have a very good sense of just how bad or how precarious the city’s fiscal situation is.

We saw that play out during impasse with DCEA (twice) and the firefighters. The city during the last decade built up huge benefit packages and also increased salaries across the board. But, as we have noted many times, those benefits and salaries were built on unsustainable revenues. In addition to double-digit increases in property tax, we supplemented the revenue with $3 million from a 2004 sales tax measure.

Unlike this past sales tax measure, that one was largely largesse – the city feigned a need for the money to save parks, police and fire, but that money did not go into increased employees’ and city services.  It went into a $3 million increase in compensation to firefighters, and other money went to give other employee groups smaller but still sizable increases.

When the recession came, it shut off property tax as an engine for revenue growth and, as we have now argued many times, the city chose first to cut costs through attrition and furloughs before finally in 2012 getting serious about getting to the root of the problem.

The biggest cost, however, is largely unseen and is correctly pointed out by the reader above – and that is the city deferred monies that should have gone into infrastructure in the years they attempted to balance the books without serious cuts to compensation.

The result is a massive deferred maintenance bill coming due, not only on roads but parks and building infrastructure. That money will ultimately come from the voters, but it’s actually a double dip to the voters. First, the voters spent the money to build up compensation, now they’re spending money to bail out the city for failing to pay for infrastructure.

However, I continue to maintain that the voters themselves are not blameless in this process and instead believe that the voters were only too content to allow compensation and salaries to build in the last decade and did not come to a day of reckoning until it was too late and we were in the depths of recession.

Voters were actually warned multiple times, most recently in 2008, months before the collapse of the financial markets.

While I understand the inclination to simply let people go if they have low morale – and many undoubtedly will, I think it would be nice for city management to figure out who is an asset to the community and whom we can easily replace. That was part of the problem with the attrition – we lost good employees with the bad, and it is often the good employees who are most able to leave since they have more opportunities for new employment.

There is no easy answer to the issue of employee morale. There is also no doubt that the city has been horribly managed for at least the last 15 years – with few periods otherwise – and ironically, for the most part, the employees benefited mostly from that time. It is only now, when the chickens have come home to roost, that they realized the price they paid.

Share:
Tags:BudgetCity ManagerCity of DavisCompensationemployee moraleMOUparcel taxSales TaxSteve Pinkerton
Previous : The Impact of Affordable Housing
Next : One Case Moves to Trial While A Defender Will Represent Himself in Another Trial

33 thoughts on “Commentary: The Other Side of Employee Morale”