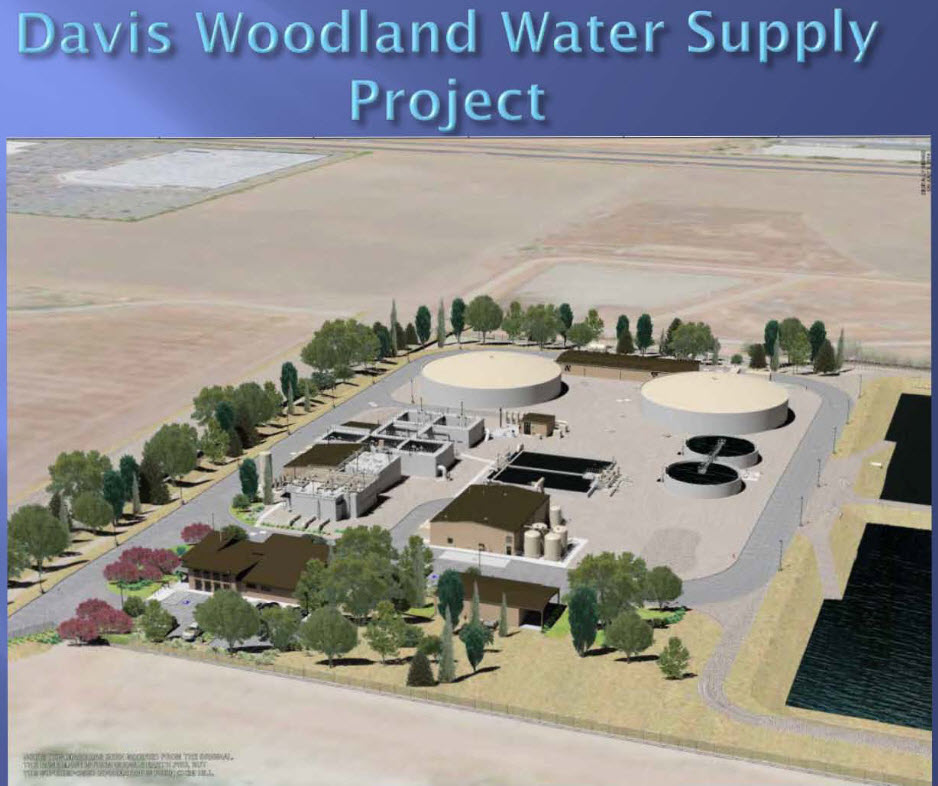 The council quickly passed the staff recommendation to “Accept the Water Rate Cost of Service Study prepared by Bartle Wells Associates (BWA) dated July 2014, subject to minor modifications,” “Approve the water rates for a five year time frame that can be included in a notice to customers for raising water rates in accordance with Proposition 218,” “Authorize the Notice to Property Owners of Public Hearing on Drinking Water Rates scheduled for September 16, 2014.”

The proposed Prop 218 notice would go out shortly and the public hearing would be September 16, 2014. 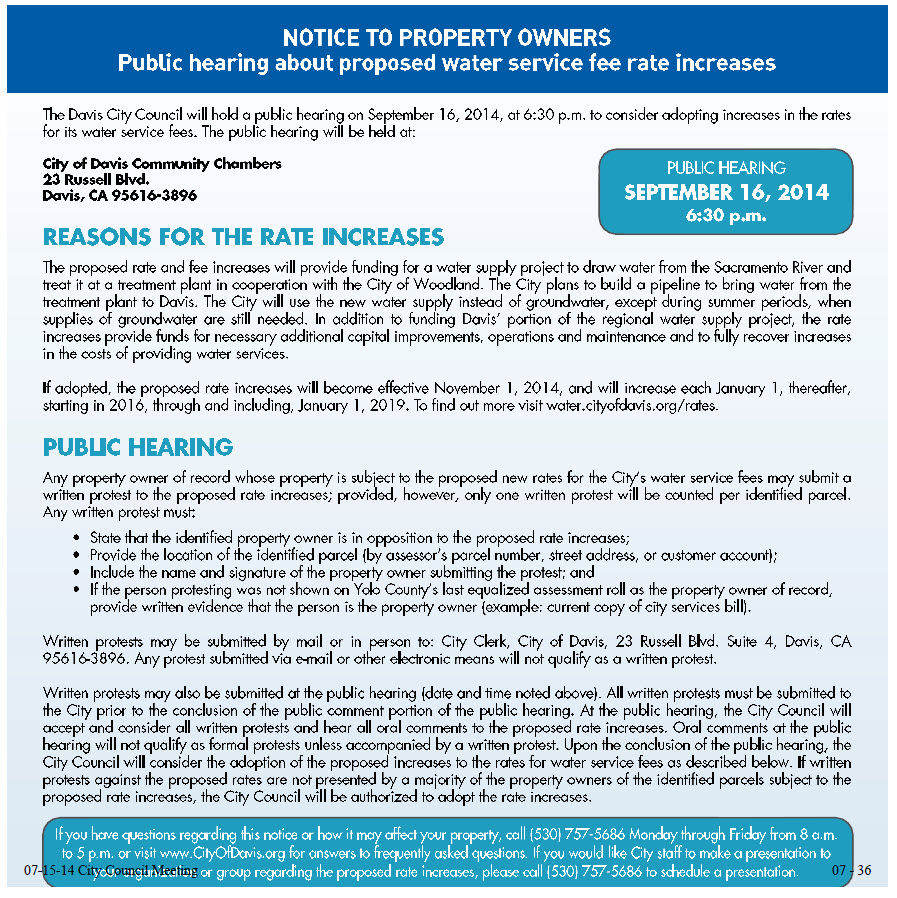 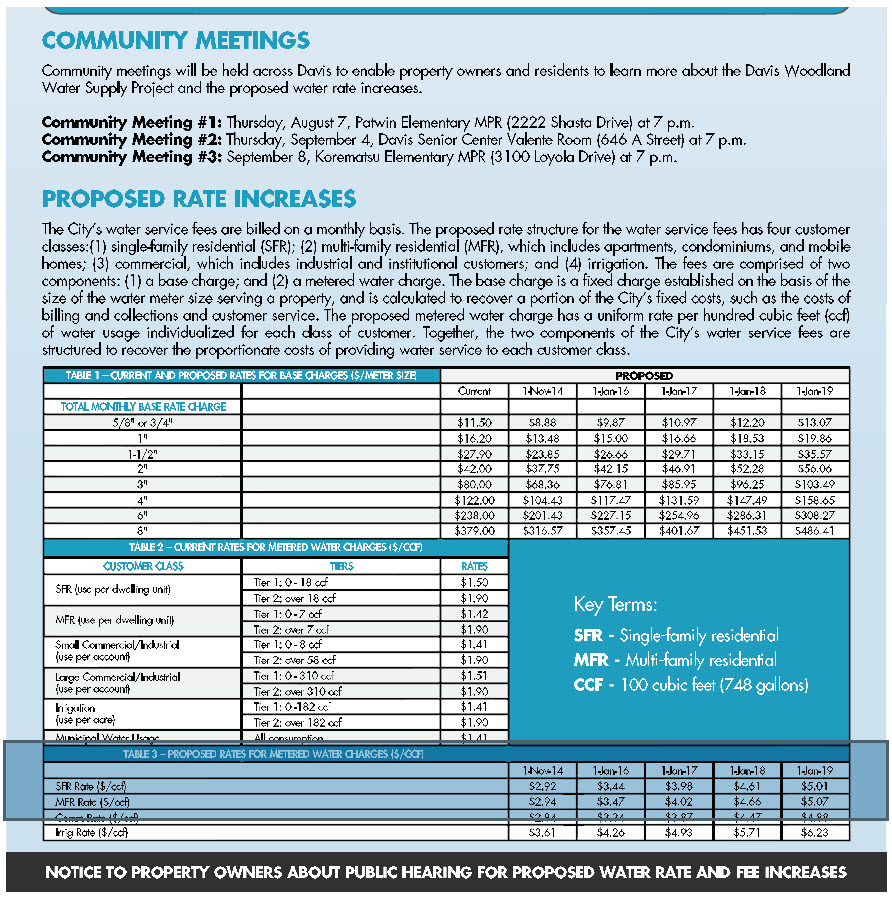 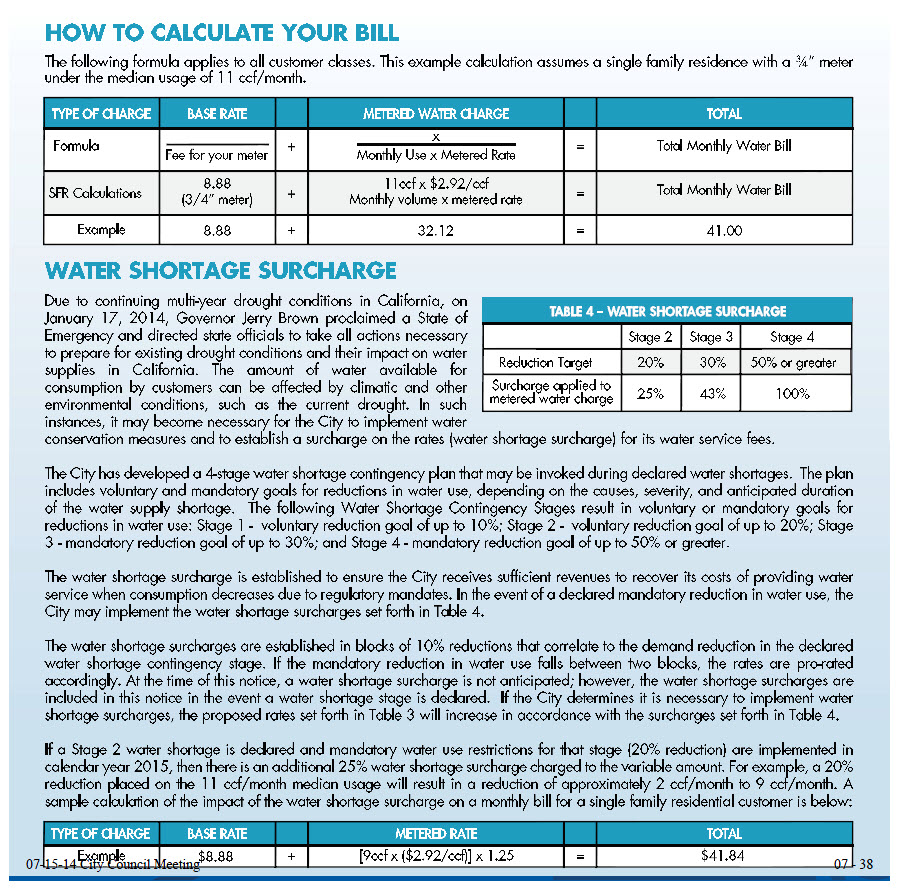 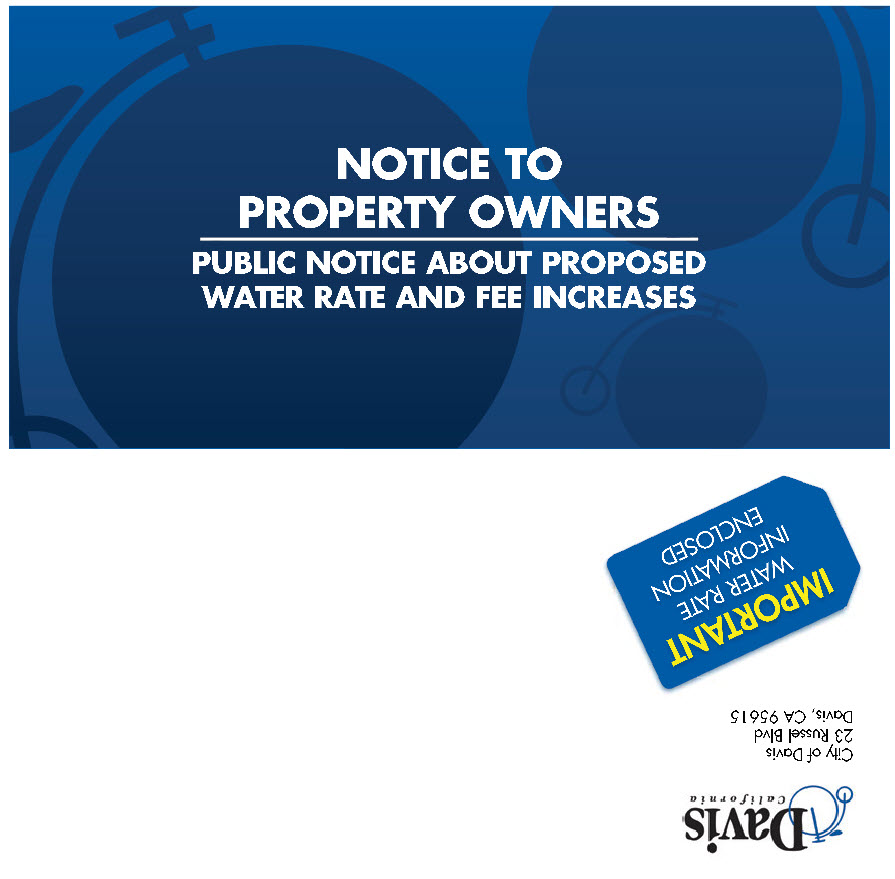 The key question is whether this agreement will hold. Michael Harrington was not present at the meeting.

However, former Mayor Sue Greenwald argued briefly for greater equity. She told the council, “We’re making progress (on the equity issue), but we’re not there yet.”

She noted that the main concern mentioned by the Measure P supporters was that apartment units are paying less per gallon than the median house owner. “This is going to increase with time because the percentage is going to stay the same, so as our rates go up, this difference is going to be more significant.”

Ms. Greenwald argued it would only take some small “tweaking” to accept the rates that Donna Lemongello and Matt Williams “worked out that do much better in the equity department.”

The question is whether this differential of 17% versus 6% is enough to continue to hold out. Our graphics showed vast differences in the 60-40 rates which CBFR and then 87-13 attempted to close. It was pointed out by Elaine Roberts Musser at the URAC meetings that even the difference between 60-40 made only a $9 per month difference by 2018.

Elaine Roberts Musser, who chaired both the WAC and URAC, pushed for the council to finish this process. “I think at this point to start tweaking and fiddling and so forth, is counterproductive,” she said.  Ms. Musser was both a strong critic of CBFR and in this process a strong proponent of 60-40. She said on Tuesday, “You made the decision last time, stick with it. The problem with doing tweaks and so forth is that you’re not going to be sure what you’re going to get.”

Mayor Pro Tem Robb Davis stated, “I’ve been thinking a lot about the equity issue.” He added, “At some point we reach a limit on using rates to do something that rates are really not best suited to do.”

He argued that the kind of fine tuning needed for social equity, “may not be possible.” The mayor pro tem stated, “The issue is that there is concern in the community about some community members not being able to pay the increased rates. Maybe not by next year but by 2018.”

“If that’s the issue,” he said, then staff needs to work with council to talk about expanding the lifeline program. He spoke about the need to cover renters. Harriet Steiner pointed out under some conditions it could apply to renters. But the council agreed to take up that issue within the main motion.

The question, however, still remains, whether the city has gone far enough to appease the critics to allow this project to go forward with no further legal challenges and no further attempts to put the rates on the ballot.

A week ago it seemed the answer might be yes. Don Price argued that fear of legal action was a red herring. He explained, “The only reason that the council has been plagued with legal action this past year is that people didn’t like the experimental rates that the city council voted for before. I can’t imagine anyone bringing any kind of legal action or challenge to an 87-13 rate.”

But the absence of Michael Harrington and the comments by Sue Greenwald at least leave open the possibility that the answer is no.

30 thoughts on “Council Passes New Water Rates, Will It be Good Enough to Satisfy Critics?”