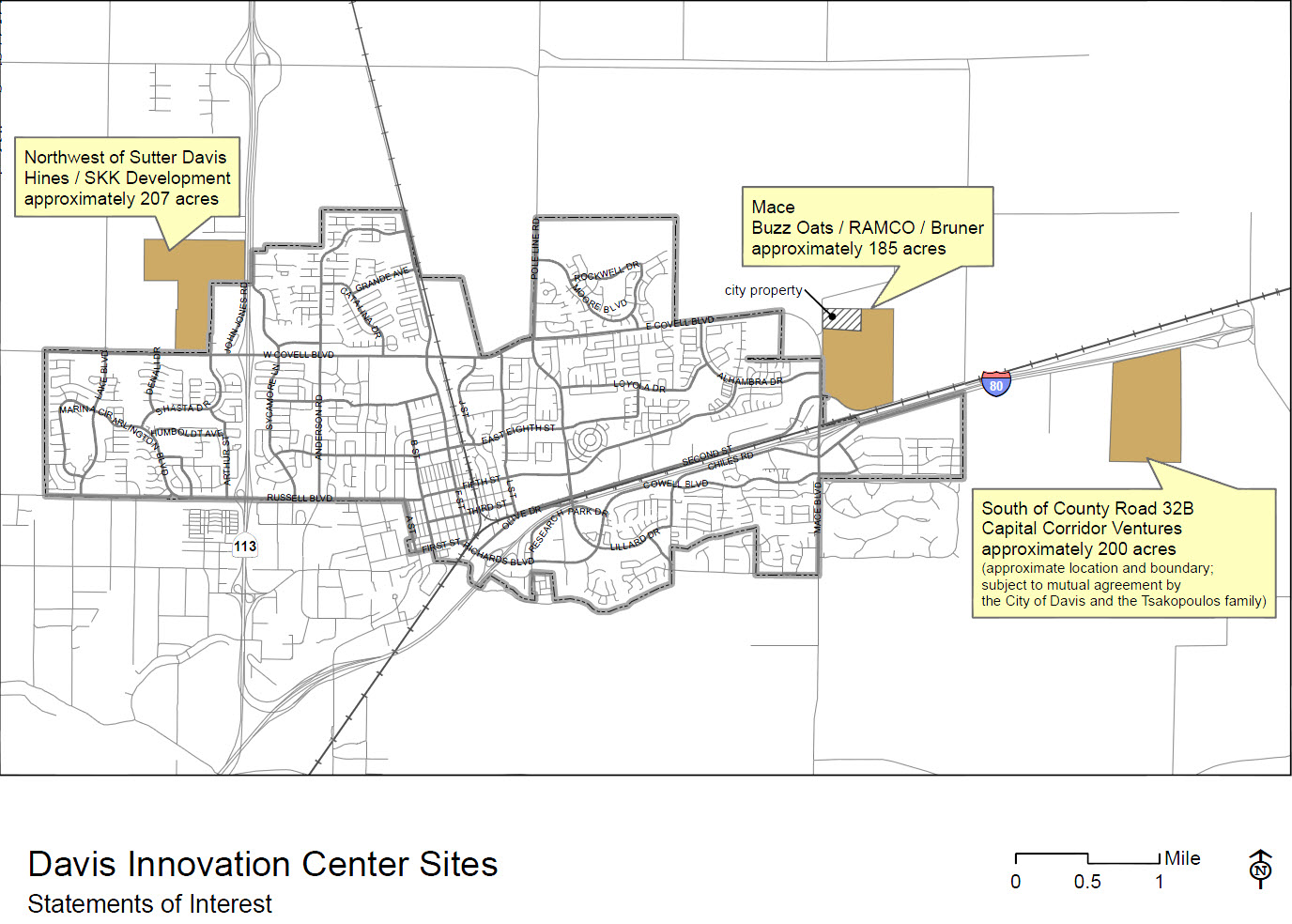 Council moved quickly on Tuesday to rescind efforts to put an advisory vote on the ballot following the letter from RAMCO withdrawing their request for an advisory vote. The council appointed Rochelle Swanson and Robb Davis to serve on the ad hoc council subcommittee.

The subcommittee, part of Robb Davis’ motion from last week, is charged with identifying “overarching expectations for Innovation Center projects that represent community goals not otherwise included in standard development codes, such as those contained in various community plans.”

It will also “Reach out to the business community and key City commissions to assist with the development of expectations and advise on retaining and attracting new technology businesses.”

It will now report back to council no later than mid-October 2014. The council also deferred action on initiating a city-sponsored advisory measure pertaining to a city-owned 25 acre parcel located in East Davis.

Dan Ramos stated, “We’re ready to move forward and do this community outreach process.” He stated his intention is to have the application formalized by September 1 or early September.

Sotiris Kolokotronis, speaking for the Davis Innovation Center group, stated, “We’re very pleased that this advisory measure vote issue is behind us so we can move forward and focus on putting something together… on behalf of the stakeholders. We would like to move fast, however, we want to make sure that we give enough time to the different stakeholders to get their input.”

He said they are looking to put forward a world class innovation center. He asked for a platform created by the city for outreach that enables an orderly process going forward which will minimize the risk of infighting.

David Morris spoke on behalf of the Davis Ranch Innovation Center proposal. “We’re not prepared to roll out our action plan right now but we’re diligently moving forward on that,” he said. He asked for their patience and felt that the city would be excited about this proposal.

Rochelle Swanson clarified that from her perspective the subcommittee was not about doing the developers’ outreach for them, but rather about setting council-level goals and expectations that reflect community values.

During public comment, Elaine Roberts Musser reiterated her Spiro Agnew rejoinder of “nattering nabobs of negativism,” but also noted four critical concerns that may arise from the community.

First, “Is this going to create a need for more residential housing?” Second, “Is it going to increase traffic?” Third, “Some will say this will not generate tax revenue.” Fourth, “Let’s raise the bar as high as we can so we can’t approve this.”

She was concerned that there will be demands made that pile up to the point where the city and developers can never reach those demands.

Chamber CEO Kemble Pope noted that those “four points… are very much important and I think that they all have been answered pretty thoroughly through the process over the last few years.” He added, “Now we need to make sure that they’re presented and in digestible means to the community.”

Jim Gray urged the council “to pause for a second and avoid picking winners and setting a prescription of what’s the right answer.” He argued that we have world class developers and planners working for them. “You have an opportunity to stimulate a competition to challenge new ideas and to cause the folks who have the land, the money, the resources, and the ideas to innovate on your behalf. “

“You sit as the judges of those values and make sure that those qualities are being incorporated,” he said, warning them not to fall into the trap of micro-managing the project.

“This is 2014, and it’s difficult to guess what are going to be the innovative projects, the technologies, the important changes in the environment, the economy that we’re setting up for ten years, twenty years from now,” he continued. “All of these folks are about to take a business risk that if they’re really lucky they’ll be building their last buildings and selling their last lots thirty years from now.”

He argued that they need to “build in some flexibility” and don’t “make this a prescriptive exercise.” He concluded, “Encourage your staff and citizens to push these folks to do something that will incorporate Davis’ DNA and that we can all be proud of.”

Mayor Pro Tem Robb Davis stated, “Whether everyone is really comfortable with it, our community really wants engagement. It will come at some point.” He argued if we do a good job upfront of talking and listening to folks, it will serve the community well.

“My attitude is we do it now or we do it later. We listen now, or we have people more upset later because we didn’t take time to listen,” he stated.

Mayor Dan Wolk said, “I think this subcommittee’s benefit will come when we have that concrete grounding”…when they have one or two project applications. He would add, “There is more that we can do and this is not about reinventing the wheel.”

So the process will now go forward, but while it is a more relaxed timeline, we hearken back to Dan Ramos’ comments from last week, that while they have backed off the request for an advisory vote, we still have a tight timeline.

Rob White would lay out this timeline again during the staff report. The RAMCO and Hines (Northwest Quadrant) teams have told staff they plan to conduct some community engagement activities during the break that ends on August 26.

On September 1, RAMCO committed to submit their application and Hines may do so as well. In the fall through early next year, the city will process one or more of these applications. They are now looking at a November 2015 vote which creates about a July 10, 2015 deadline for getting a ballot measure on the ballot.

RAMCO has committed to a process that would result in a November 2015 Measure R vote. To get to that point, a lot of work and outreach needs to be done.