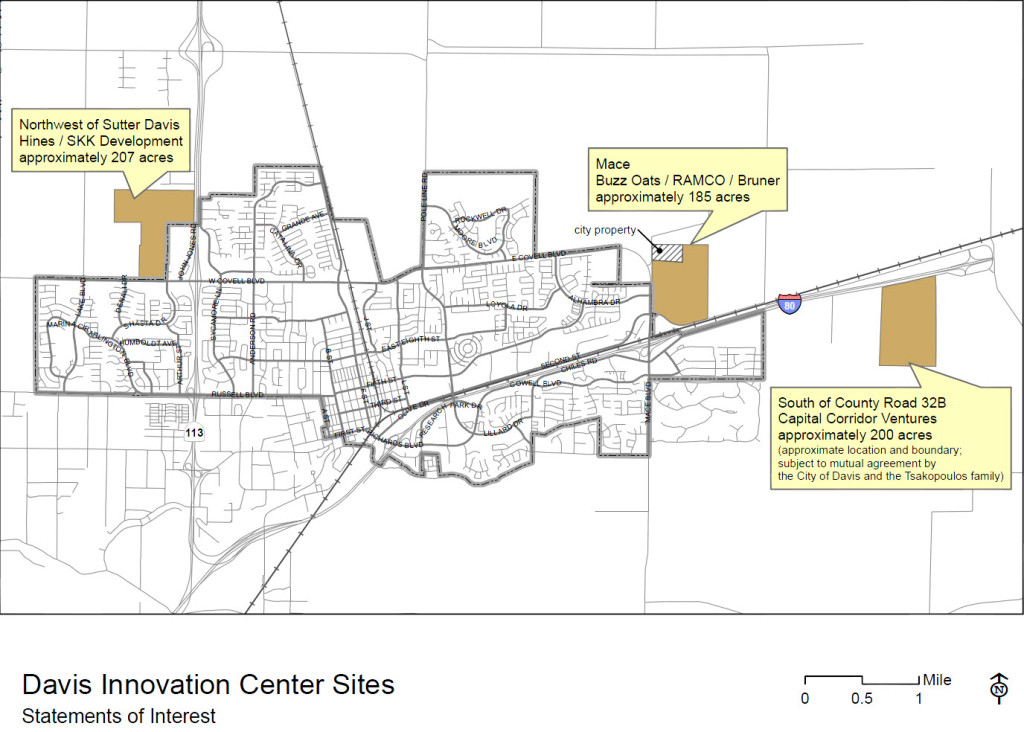 At the last council meeting, the Davis City Council, responding to a request from the Mace Ranch Innovation Team, agreed to consider putting an advisory measure on the ballot about the acceptability of an innovation center on the property northeast of the Mace Boulevard and Interstate 80 interchange.

Following the request by the Mace Ranch team, the Davis Innovation Park Team and the Davis Ranch team “also requested that, if an advisory measure was to be placed on the November 2014 ballot, they too would like to be included.”

A motion by Brett Lee led to the possibility that staff would prepare advisory measure ballot language for the City-owned 25 acre parcel north east of the Mace Boulevard and Interstate 80 interchange.

As the Vanguard has reported, council was reluctant to grant this request, but did so out of concern that Schilling Robotics might be forced to move outside of Davis if they lacked a location for expansion.

However, as the Vanguard reported on Thursday, a letter from Dan Ramos, who is heading up Mace Ranch Innovation Center team, withdrew that request, indicating that the proposed advisory measure generated “a great deal of discussion by the Council” and that they have “carefully rethought our request and have concluded not to proceed with an advisory measure at this time.”

The letter did not shut the door on a future effort to “seek an advisory measure early next year when the project is further defined” and also indicated that Tyler Schilling of Schilling Robotics “participated in this decision and concurs with it.”

Staff reports, “The other two RFEI respondents had previously indicated at the July 1st and 2nd Council meeting that they would provide ballot measure language and agree to fund the election should the Oates/RAMCO/Bruner team provide a submittal, but neither submitted any materials and both indicated orally that they would not be submitting anything by the July 9th deadline established by Council. “

Staff writes, “Therefore there are no longer any requests for advisory measures from the RFEI project proponents.” The city also did not submit language for a city-sponsored ballot language on the 25 acres “since Council’s action was linked with the advisory measure requests that had been made by the three RFEI respondents and furthermore the city would bear 100% of the special election costs.”

Where does that leave the process? At the last meeting, the Davis City Council established “an ad hoc Council subcommittee to work with staff to identify overarching expectations for Innovation Center projects that represent community goals not otherwise included in standard development codes, such as those contained in various community plans.”

The subcommittee would reach out to the business community and key city commissions to assist with the development of expectations and to advise on retaining and attracting new technology businesses. That subcommittee is due to report back no later than mid-October 2014.

Staff is suggesting October 7 rather than the original second meeting in September for that report-back date.

Rob White, Davis Chief Innovation officer, told the Sacramento Business Journal on Friday, “This is not a competition or a beauty pageant… In the best of all possible worlds, they all move ahead.”

The city still needs to be concerned about the potential for meeting the needs of Tyler Schilling.

Dan Ramos told the Vanguard in a phone conversation that, while Tyler Schilling “participated in this decision and concurs with it,” he remains on a very tight schedule. They have to move forward with this project quickly and show that the community is behind them.

As they made it clear in their letter, “Our intent is to move forward as expeditiously as reasonable with that application, with the anticipation that we will be ready, pending Council approval, for a Measure R vote in November 2015.”

Mr. Ramos added, “Although not his preferred course, Tyler Schilling supports this course of action since he believes that the our expeditiously moving forward on an application presents his best opportunity for securing the expansion space which he needs – in Davis – on a timely basis.”

Sources familiar with the city situation told the Vanguard on Wednesday that city staff worked hard with the development team to come up with a more realistic timeline that will enable the public outreach and development of the project to proceed in a timely but thorough matter.

Councilmember Rochelle Swanson has been the strongest advocate for pushing the process forward.  She told the Vanguard early Thursday morning, “I am appreciative of the level of engagement on the innovation centers and am optimistic we will see some good applications and an engaged outreach. The activity and responsiveness of Ramco over the last few iterations on an advisory measure, including the decision to rescind, bode well for applications and the process moving forward.”

She added, “I am glad the measure R process will move forward. While it is imperative any application have rigorous outreach it is equally imperative Davis citizens proactively engage — early and often. Waiting until the eleventh hour produces poor results and hampers a ‘good faith’ process. I am eager to see a ‘Davis DNA’ innovation center that does the community proud and provides a sustained and reliable revenue source to bolster our quality of life.”

John Hodgson and the Northwest Quadrant Team did not return a request for a comment. However, last week they laid out their position quite clearly when Mr. Hodgson told council, “We question the advisory vote, but if there’s going to be one, we’d like to be included and we appreciate Dan’s (Ramos) offer.”

“These things are all happening with 20 minutes’ notice to the other participants,” he told council. “These things are multimillion if not billion dollar decisions. It would be nice to have a process that is a little bit more orderly in following RFEI. Having said that, this is the real world and we’ll deal with it.”

He added, “We will, as aggressively as possible, work on getting a project through. We filed an application with the city today.”

George Phillips, representing the Davis Ranch project, told the council, “We as one of the applicants know that we have quite a bit of work to do in a compressed time period and we are committed to participating in whichever the council defines for the three proponents to follow.” However, he added, “We think advisory measures provide potential benefits and also potential risk.”

He was uncertain about whether the risks outweigh the benefits, “particularly if there’s not a sufficient amount of detail about these proposals available to the public about which they can make their decisions on a public vote. If there is to be an advisory measure we would probably urge that there’s more time allowed for those proposals to take shape.”

“If one proponent is allowed to have an advisory measure, we definitely want to be in that mix and participate,” he said.

Council will hopefully provide staff and the community a better sense for how this process continues to move forward.

18 thoughts on “Council to Ponder Next Moves on Innovation Parks”