The Davis City Council in a special meeting on Thursday evening, acting on advice from Melissa Chaney, Director of Human Resources, and consultants from the executive search firm Ralph Andersen & Associates, unanimously voted to increase the salary range for the city manager position and to re-open recruitment at the new salary range level.

Their vote sought to modify “the Compensation Plan of the City Manager position to be competitive with market comparisons,” “Establish a salary range of the City Manager position up to a range of $217,200 to $241,300, with appointment to be made within the range based upon the qualifications and employment history of the individual appointed to the position,” and “establish a limit of up to 10% for additional monetary benefits (in addition to health/dental and PERS retirement benefits), to be negotiable.”

“We haven’t looked at the compensation for the position within the last three years,” she stated. She explained that the current language limits the ability for the recruiter to have conversations with some of the applicants “because of the salary limitations. The language basically stated it was tied to what the previous compensation was going to be. That was compensation that was three years old.”

Councilmember Rochelle Swanson explained the timing of the discussion. She said, “Had we had the discussion about the City Manager in our closed session at our first July meeting, then we would have had this conversation ideally tacked on this Tuesday night. I just don’t want the community to wonder why there was this rush – there’s not so much a rush as we’re going into break and you need to have this feedback and ideally this would have been on Tuesday night’s open and normal calendar.”

“We recognize that that would have been ideal ,” she added. 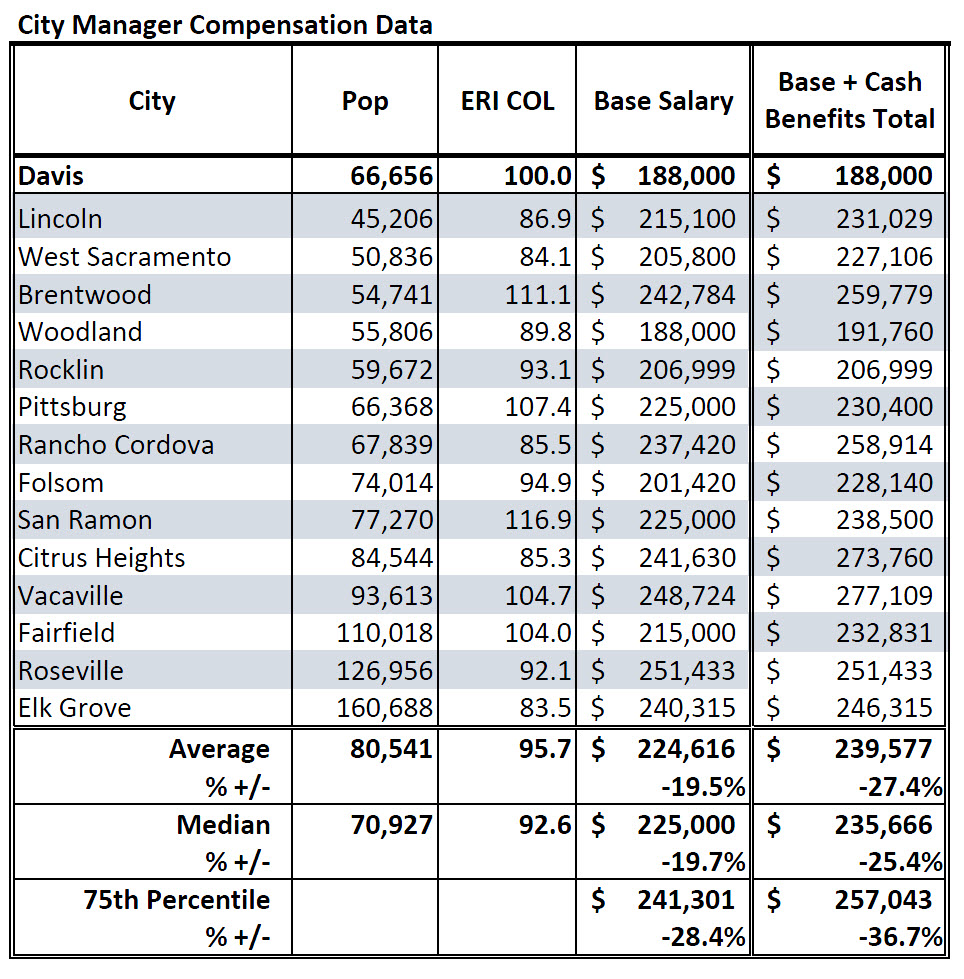 The city and consultants did a rate comparison that showed Davis’ City Manager compensation of $188,000 was at the bottom of the market.

The consultant suggested that the city should aim for between the 50th and 75th percentile in terms of compensation which would bump up the pay range from the current level to $217,000 to $247,000.

As staff wrote, “Given the desire of the Council to attract and select a highly qualified City Manager, the recruiter recommends using the 75th percentile of the market to establish the high end of the range, which would be $241,300. The additional benefits provided are widely varied.”

Councilmember Lucas Frerichs moved staff recommendation. Seconded by Rochelle Swanson.   Councilmember Frerichs argued that we currently offer the lowest pay in the region and we need to be able to be competitive with other markets particularly given our higher cost of living.

“Any city manager worth their salt is really 24/7 City Manager,” he said. “In Davis that is absolutely not the exception, it’s the absolute rule. Whoever has been and whoever will be the city manager is going to be someone who is facing such a wide range of really important tasks working on not only budgets and such but revenue issues and also economic development, innovation parks and stuff like that.”

Councilmember Swanson talked in terms of being these regional leaders. “The 24/7 is certainly an expectation on the city manager,” she stated. She added that “this is the right thing to do to ensure that we really get the best candidate pool including those that we have already seen and making sure that we give the community the very best that we can.”

Mayor Pro Tem Robb Davis said that, while he did not disagree with expanding the pay scale, he wondered if it would be worthwhile to maintain the lower limit. He said, “Does it keep it just a little bit more open so that maybe a candidate whose salary experience suggests we set the bounds lower, do we keep it open just in case?”

However, the consultant talked him out of such a notion, stating, “I think it would be very unlikely that you get a candidate, recognizing your cost of living, that would come here for that money.” He stated, “It’s not a real number. It’s not a number that practically that any candidate takes, unless you were literally hiring somebody that this was their first experience in terms of that role.”

He added, “That wouldn’t be a good fit for the city of Davis.”

However, in the end, he agreed with the consultant. “I will support this,” he stated. “Having a really good city manager can make a huge difference.   It is clear from the data that we are significantly below… other cities.”

The motion passed unanimously 4-0 with Brett Lee absent on a pre-planned trip. The city will now re-open the process over the break. Interim City Manager Gene Rogers took over in late April and he has until late October before his time as allotted by CalPERS under the retired annuitant policies would expire.