Recognizing that pushing for an expedited Measure R process would potentially derail the process, the Mace Innovation Center developers, led by Dan Ramos, sent a letter to council on Tuesday indicating, “The Mace Ranch Innovation Center team has listened carefully to the community response to our proposal to modify the Measure R voting process. That discussion, which has occurred in a variety of forms and places, has made clear to us that Davis residents treasure Measure R and do not wish to entertain changing it.”

Based on that, Mr. Ramos announced on Tuesday, “We are accordingly withdrawing the request.” He writes, “Our intent instead is to proceed with the processing of our project consistent with the existing provisions of Measure R. That means our proposal will be subject to a vote by the electorate only if and when it is approved by the City Council.”

However, they asked for an early check-in. “In order to allow that to occur, and to provide our team with early citizen feedback, we would now request that the Council place an advisory measure on the November ballot which would allow the electorate to express their level of support for our proposal,” he wrote.

The huge part of the driver here was Tyler Schilling. Early in the evening he told the council, “The trajectory of our particular business has us believing at the moment that we need to build a 200 thousand square foot facility with 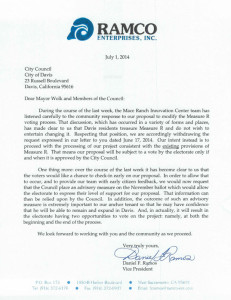 contiguous expansion room to 400 thousand. Unfortunately, our timeframe may not coincide with the process that is going on at the moment.”

He was blunt, “I need to before we enter 2015 have a serious reduction in the degree of uncertainty about the likelihood in timing of a project like this, otherwise I would have to explore other alternatives as a purely practical matter.”

Later Mr. Schilling would clarify his position. He said that, in his nightmare scenario, he would go through a very elaborate and detailed process, the voters reject it two years down the line, and he doesn’t have a viable plan B in place.

“Some degree of comfort in the not too distant future is an essential part,” he said.

However, the advisory vote, while seemingly preferable to altering Measure R, does not have clear sailing just yet. The council will reconvene tonight to weigh the proposal.

They heard a mixture of thoughts from the public as well as council.

Former Mayor Ken Wagstaff said bluntly, “Don’t fast track Measure J.” He said, “The public in this town is proud of the fact that they can intelligently decide what they want their city to become. This whole idea of having an advisory vote, I think is strange because the whole idea of having Measure J is to put before the public a specific decision. An advisory vote doesn’t sound very specific to me.”

Jim Gray thanked Dan Ramos and his partners “for withdrawing this silly idea that they had.” “Challenge the competitors to file an application, a fully vetted application where they say what they’re going to do. They stand up to the CEQA review, you’re going to consider the alternatives, the public’s going to be informed, and they’re going to compare their projects and their values to what they’re trying to do and what this community wants.”

Elaine Roberts Musser stated, “I’m glad that the idea of messing with Measure R is withdrawn. I think that would have been trouble. I’m a little concerned about an advisory vote, my fear is that if you come to the community with a partial plan, they’re going to reject it just because it’s a partial plan. I think you really run into some dangers in having an advisory vote.”

She stated, “I think a citizen’s initiative makes more sense.”

John Hodgson, who is among the leaders of the Northwest Quadrant development team, had previously expressed apprehension about pushing the process to November, believing that it was neither “good public policy” nor “strategically wise.”

On Tuesday, he told council, “I’m not sure how we’re going to react as a group. I don’t think we think it’s a good idea.” He said that they had expressed previous concern about putting forward one project ahead of the other and he believes the same holds for an advisory vote.

Councilmember Rochelle Swanson lamented that we have talked our way, processed our way, and delayed our way into the prospect of losing a critical company. “I understand all of the different projects and we want parity and parity is important. But we don’t want to lose the forest through the trees,” she said. “We’re talking about a major employer… and if we lose, do we lose.”

“I just challenge everyone in this room… to really stop and think about the big picture here about what we’re looking at,” she said, reflecting back to Mace 391, and “here we are 13 months later with a business owner begging us to get our act back together. Now sounding like maybe, from a regulatory standpoint, we truly might be up against the wall.”

“This isn’t about picking a project,” she said. “This is about retaining a business. The number one rule in economic development is you retain the businesses you have, then you go to get more.”

Newly-installed Mayor Pro Tem Robb Davis said, “I’m a little concerned about an advisory measure at this time.” He noted that they would have to get something on the ballot by July 15. “This implies that enough specificity is going to be in place by November to enable people to actually provide advice.”

He said, “I’m okay with that because it sounds like the respondents are asking for the advice and they’re bearing the risk of interpreting that one way or another.”

Mayor Dan Wolk also was relieved that the developers pulled back on the Measure R front. He asked Dan Ramos whether this is the sort of thing where, if they do not get the advisory vote, they would not be able to do the project.

“It’s very critical,” Mr. Ramos explained. He said they need “some type of reading from the city that this is something they want to embark on in terms of our project. It’s very important – we’ve heard it loud and clear in discussions with our possible anchor tenant – that we really need to see some type of indication, this gives us one more level of comfort to move forward.”

He said they are contemplating starting the process now, but they need action by July 15 on the advisory vote.

The previous discussion focused on the RFEI process and the three projects that came forward.

Supervisor Jim Provenza said, “I am excited about the prospect of an innovation park as being an opportunity to address the Davis economy and economic sustainability going forward into the future.”

He he noted that this is on county land and there are issues of mitigation for loss of ag land and an agricultural buffer. He offered to work with the city to make the process “as seamless as possible.”

Mike Harrington, former Davis Councilmember, expressed concern about the lack of talk about mitigation. He indicated, in terms of the principles that were laid out in 2012, “the one I don’t see there is mitigation.” He noted that the 2000 city council was instrumental in implementing Measure J and the mitigation rules.

“I’m listening to this tonight and I’m not hearing about that. I’m not seeing any proposals that have real mitigation,” he stated. “The developers for a 200 acre business park are going to make a fortune and where are all those people going to live who are filling up those 200 acres of very intensive business, where are they going to live?”

Rob White, the city’s Chief Innovation Officer, explained to council that mitigation “is an obvious that needs to be addressed.   Measure R speaks very clear to it, it’s a 2 to 1, I think there are opportunities to do not only those but (also) more sustainability measures, really reaching towards the 21st Century.”

He explained, “The RFEI was not meant to simply be ‘here’s what we expect, please respond to it.’ It was meant simply to say these are our goals, these are our DNA of Davis, how do you help address those things?”

He added that “LEED, while still important, isn’t the only thing that we’re going to judge projects and/ or buildings by.”

As he explained during his presentation, the RFEI does not “take the place of any more formal process, including application and the entitlement process.”

Rob White also addressed “the concern of all these new people and where are they going to live.” He argued that a lot of people in this community live in Davis, but work out of town. “If there were opportunities locally how many more might stay locally?”

Wouldn’t it be nice, he suggested, if people had more options to stay locally to work? He noted that a report showed that there is a 3000-job deficit in Davis.

The council tonight will have to make a decision on how to go forward on the revised proposal and setting forth a process for all three proposals to have the opportunity to outreach to the community.