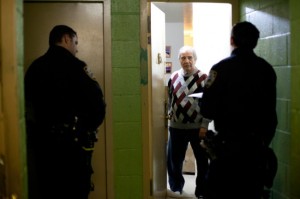 I have often advised people to simply not talk to the police without an attorney present. I have seen enough cases where people have been tricked into giving inconsistent statements and inadvertently offer corroborating evidence, while innocent people have been coerced into false confessions.

Strangely, back in the fall an incident occurred in my personal life where I didn’t follow my own advice. It was a Saturday evening and I was lying on the couch with my daughter watching a movie, when a knock came at the door.

At night, it was a surprise that anyone would be knocking unannounced at the door. My niece, who was visiting, asked who it was, and when learning it was the police, she beckoned to me to handle it.

I opened the door to find three Davis police officers. “Mr. Greenwald,” one of them said, “we need to talk to you.”

At this point my stomach goes into knots and my brain starts firing on all cylinders, wondering what in the world they could need to speak with me about. I asked what this is about, and the officer asked me if I wanted to talk about this here or go inside.

Now, all of the rules state, you should never let an officer inside your home. In fact, you are supposed to only open the door far enough for them to talk to you. Why? Because they need a search warrant to search your home but if you let them in, anything they spy in plain sight is a valid search.

Of course, I’m not thinking about that. I’m thinking that I didn’t do anything and I couldn’t even begin to imagine what they would want. In retrospect, it was probably a mistake to let them in, but at the same time, it worked out okay.

So they came in, my entire family was downstairs and everyone had now gone from relaxing Saturday evening mode to on edge.

The officer informed me that someone called concerned about the bruises on my daughter. At that point, all nervousness left. I knew what this was about and I knew what had happened. I pointed to my then two-year-old nephew and stated, there is your culprit. He hit my daughter in the face with his sippy cup.

That the police were even called on this matter is messed up. My daughter had been at the city recreational gym by the pool across the way from city hall. One of the employees must have seen the bruise – a very thin line on her face – and thinking that his/her duty as a mandated reporter was to call the police, did so.

Why would they do that rather than asking us what happened? No idea, but I understand city employees were given some additional training on mandate reporting after we complained.

The officer checked out my daughter, saw the superficial bruise on her face and none anywhere else (which, given my daughter’s proclivity to use anything in the world as gym equipment, was a small miracle in and of itself), the sleepy child was a bit confused but no worse for the wear.

The officers, realizing that there was nothing to see here, quickly remedied the situation by getting the two little kids stickers and a stuffed animal. They apologized for interrupting our evening and went about their way.

The oddity of three officers on the call aside, I can’t fault the conduct of the police that night.

As almost every website I have found indicates – I did this wrong by the book. First, under the Fourth Amendment, police are required to get a signed search warrant to legally enter and search someone’s home. Now I did not – and would not have given them an okay to do a search, but allowing them in allows them to see anything that is out in the open or plain view.

Flex Your Rights tells you plainly, “Don’t let them inside.”

They write, “If you’re concerned they might try to force an entry, you may greet them outside after exiting through another door. You may speak with officers through the opening protected by your chain lock. If police come to your door and you don’t require their help, you may simply decline to answer the door at all. Unless they have a warrant, they will eventually leave.”

Also, I failed in not determining the reason for the visit before letting them in. Flex Your Rights notes, “While you might not be pleased to have police at your door, it’s wise to treat them as you would any other unexpected visitor. Calmly and respectfully ask, “How can I help you?”

“In many cases, an officer’s visit will have little to do with you or be something you can easily fix. For example, an officer may be seeking information about a crime committed in your neighborhood. Or she might be responding to a noise complaint. If so, it’s wise to apologize for the inconvenience, then turn down the music or bring in your barking dog from the backyard.”

They continue, “In other instances, an officer might want to investigate activities taking place in your home and ask to enter. You might even be a suspect in a criminal investigation. In such a case you should remain silent — except to say “Officer, I can’t let you inside without a search warrant.” Following such an encounter, you should immediately contact a lawyer before speaking to police again.”

The ACLU, on their page, notes, “If the police or immigration agents come to your home, you do not have to let them in unless they have certain kinds of warrants.

“Ask the officer to slip the warrant under the door or hold it up to the window so you can inspect it. A search warrant allows police to enter the address listed on the warrant, but officers can only search the areas and for the items listed. An arrest warrant allows police to enter the home of the person listed on the warrant if they believe the person is inside. A warrant of removal/deportation (ICE warrant) does not allow officers to enter a home without consent.

“Even if officers have a warrant, you have the right to remain silent. If you choose to speak to the officers, step outside and close the door.”

Here is where for me it gets tricky. My instinct was that handling the matter upfront was the best and quickest way to resolve the matter. Though I have the right to remain silent, there is a possibility that being uncooperative would be viewed through an air of suspicion and at the very least would have prolonged the incident longer than it needed to be prolonged.

I knew I not only hadn’t done anything wrong but that there was nothing that they were going to find in the home other than a cluttered mess.

Still, we have seen enough innocent people arrested and even convicted that we should not be nearly so careless. At a certain point I would have needed to cut off the discussion and request a meeting with the presence of an attorney. I was quite fortunate that this never needed to happen.

Share:
Tags:ACLUDavis PoliceFlex Your RightsFourth AmendmentKnow Your Rights
Previous : Pool Project Could Sink City Finances If We Aren’t Careful
Next : SNOWPIERCER has arrived – in our theaters and on our border

38 thoughts on “Eye on the Courts: When Should You Talk to the Police?”