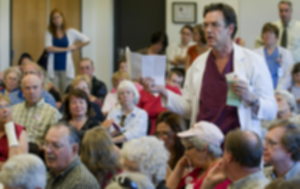 Though many of you will recognize this article’s title as a briefer version of the title of the book It Takes a Village: And Other Lessons Children Teach Us written by then First Lady Hillary Rodham Clinton in 1996, some of you may also recognize that the title is attributed to an African proverb: “It takes a village to raise a child.”

It is debatable whether any such proverb exists other than in popular cultural myth, but Wikipedia reports that at least some of the thematic elements are picked up in several African societies. Most interestingly, in both Kijita (Wajita) and Swahili, there are sayings that essentially state that “regardless of a child’s biological parents, its upbringing belongs to the community.” (Link).

With that theme, I would like to make a case that community engagement takes a village to have success. We all have to own it for it to be effective.

As many of you know, I try to constantly sort through information on government policy and administration from a variety of sources – Governing.com, Govtech.com, International City/County Management Association (ICMA) Smart Briefs, League of California Cities e-newsletters, National League of Cities e-blasts, and so on.

In any given week, I estimate that there are at least 3 to 5 articles about community engagement. Case studies and best practices on how a jurisdiction engaged the public/citizenry. Ideas on new electronic tools or applicability of social media. And of course, suggestions on effective ways to conduct good old fashion outreach and public meetings.

And of course, the Davis Vanguard provides many articles (and commentary) that suggest/demand/outline ways that the City of Davis can do a better job of community engagement.

But one element in all of this discussion seems to be missing in my view. That is the obvious point that community engagement requires that the community be engaged. Not sitting on the couch and waiting for outreach as individuals or casually strolling by a table at the Davis Farmer’s Market. And most certainly, not just reading it in the Vanguard or other media outlet and assuming that even half of the facts are even presented (or correct).

I’m talking about deliberate engagement. Some of you are actively doing this already, and for that I thank you. As a public servant, it warms my soul to see some of you at public meetings actually making comments of support or outlining your reasons for non-support. And for those of you that can’t make a Council, commission or committee meeting held by the City, but take the time to send in an email outlining your views, I thank you as well.

Good public policy is made when the public are helping to shape the policy by actively engaging and helping to make the outcome as universally acceptable as possible. Recognizing that not everyone’s opinions will necessarily be adopted as part of that policy dialogue, it is instructive (and helpful) to know what the largest majority thinks of a proposed policy or action. That’s why we vote… to weigh in on our personal preferences but then to collectively select someone/something as a community.

For community engagement in Davis, it is easy to make the request that the City provide better data or do more outreach. I have been given advice more than once to reach out to specific parts of the community on certain topics (such as Measure R) to get more input. And though I am happy to do so, I think to myself each time that the person providing this friendly advice knows these individuals and could be material in helping to do that exact outreach… or at least make the connection.

To be fair, some people have made those connections for me and I am grateful. But I am one staffer and the information I can relate in individual meetings is not an effective way to conduct broad outreach.

It should also be noted that hiring of more City staff or consultants is probably not a preferred alternative by residents for conducting more community outreach considering the negative budget impacts and cost drivers. Though there will always be a need to hire some consultants for specific parts of a project (such as the financial or environmental review), the basics of community engagement can be accomplished by the simple idea of ‘telling two people’ to create a multiplying effect.

I’ll use the innovation park discussion as my example. There is an avalanche of information on the City’s website, including videos, presentations, reports, and City Council agenda items. Many people do not know where this information resides (and in all fairness, the website is not that easy to navigate). What if each engaged reader of the Vanguard took it upon themselves to review the information, then personally point out to two community members (neighbors, friends, co-workers) where the information resides and what you found most useful in getting updated on the subject?

And before you ask, here are the two primary links on the City’s webpage for the Innovation Parks discussion:

Imagine what would happen if we had just a 50% execution rate on this idea? To demonstrate, let’s do the math – 300 engaged readers, telling 2 people, is 900 informed citizens. That is about 20x to 30x more people than provide input to the City Council on any given topic with broad community importance (like water, plastic bags, or innovation parks).

In the case of the innovation parks discussion, Davis is in the unique position to be considering several opportunities for a 200 acre innovation and research park that likely has a total build cost of about $1 billion each. That’s double the amount of build cost for the Sacramento King’s Arena. And could potentially create as many as 10,000 jobs by the time a park was completed (with an average absorption rate of about 10 to 20 acres a year, or 10 to 15 years). These data points obviously require much more vetting and a fiscal and market study, but this opportunity has the potential to have a significant positive fiscal impact on the community and should elicit broad engagement to look at all aspects of these potential projects.

And before some of you make the obvious comment of ‘does the City really want more public input?’, note that we City staffers recognize that a successful Measure R vote can only be had with broad community engagement and dialogue. Any innovation park proposal in Davis will most certainly need to be widely vetted to prospective voters.

In the coming weeks and months, the City and innovation park project proponents will be conducting a variety of outreach efforts to help engage the community. I am hopeful that each of you as an engaged reader of the Vanguard will do your best to help spread the discussion widely across the community. It most certainly ‘takes a village’ to have real community engagement. I look forward to your assistance.

Thanks for considering my thoughts. Your ideas are always welcome. My email is rwhite@cityofdavis.org if you choose to email me directly.

10 thoughts on “It Takes a Village”