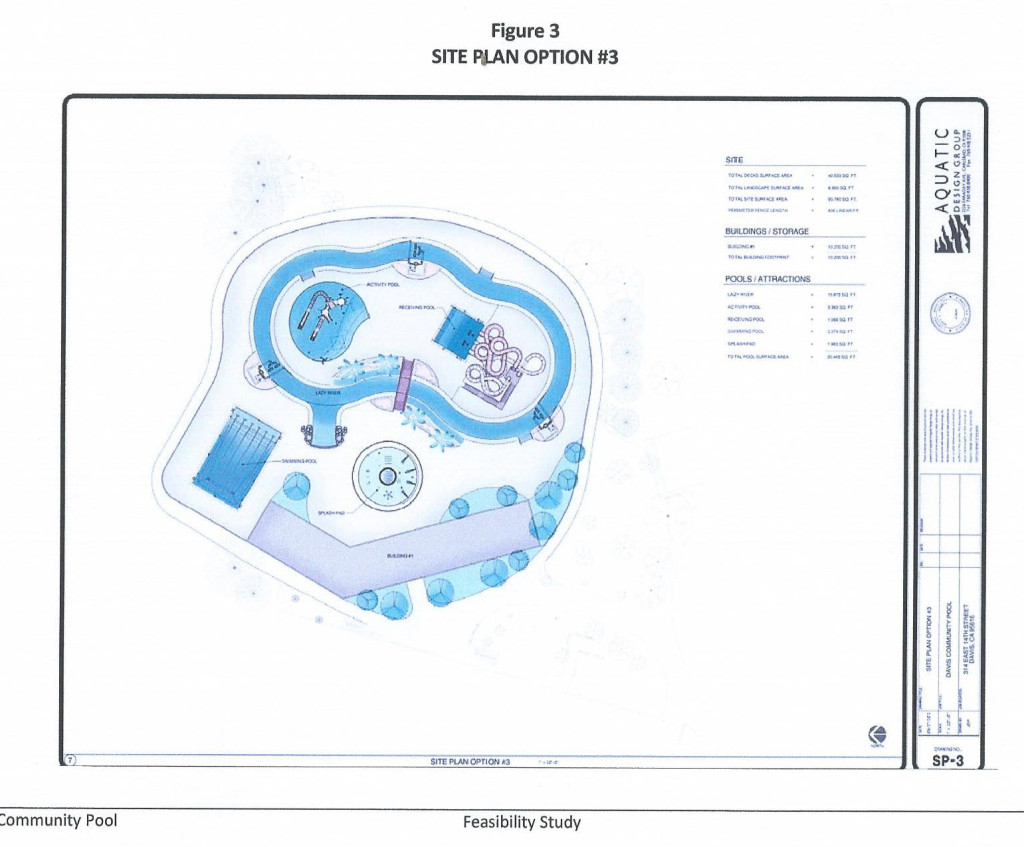 The new 50-meter pool proposed at Community Park now being considered at City Hall could punch a $550,000 a year hole in the city’s operating budget that has just been mended through budget cuts and Measure O. It is Exhibit A illustrating why city leaders need to take a careful and analytical approach to solving the city’s infrastructure needs.

This approach took a step forward on July 1 with the decision of the City Council to hold off until next year sometime for a public vote on a second tax measure. Council members stated that they wanted to conduct a comprehensive study of the city’s deferred maintenance backlog and infrastructure needs, and the resources now available to address those projects, before presenting a new tax measure to voters so soon after approval of the Measure O sales tax measure on June 3.

Now comes the hard part – conducting hard-headed and creative analysis to set the stage for addressing these fiscal challenges in a coherent manner and prioritizing the most important projects for the delivery of public services. In a piece that ran in the Davis Vanguard on June 13, I outlined the criteria I hope the City Council will consider in vetting projects for city investment. In summary, I believe the city should take into account for every candidate for funding:

— The money already available in the city’s funding base for maintenance and new facilities.

— Whether city assets could be sold or leased to fund capital improvements.

— Whether city program operations could be restructured to affect the city’s physical plant needs.

— The availability of grants from outside entities to help pay for projects.

— What creative partnerships with private and non-profit entities and UC Davis could be reached to pay for renovation of facilities or new infrastructure.

— What financing approach would offer the best bargain for taxpayers.

After hearing the council discussion of the parcel tax proposal, and thinking about the matter some more, I would add one more important consideration–the net fiscal impact of a project on city operating revenues and costs. We are still not completely done digging out of a $5 million structure budget deficit, and need to be careful we don’t end up back in one. Some potential infrastructure projects—irrigation efficiency projects, for example–might lower future city operating costs. But some might increase the deficit.

The proposed new $9 million to $10 million 50-meter pool complex now being advocated for Community Park unfortunately poses a risk of a adding more than $550,000 to the city’s structural budget shortfall. That’s not my opinion. It’s the finding of one of the foremost firms with expertise in swimming pool design and engineering that has helped build thousands of facilities around the world. A link to that study can be found here.

The city hired Carlsbad-based Aquatic Design Group to study the options for rebuilding a new pool complex in Community Park. The existing pool was closed until being reopened under an agreement allowing Davis Aquadarts exclusive access to the facility, which is living on borrowed time because of a need for major and expensive renovations. Very little of the company’s analysis has found its way into the current public discussion about razing the existing complex and borrowing up to $10 million, to be paid off with a parcel tax increase, to build a new 50-meter pool and warm-up pool. Let me help that along.

In their January 2013 report to the city, the experts came up with three options for rebuilding the pool. Option 1 provides the 50-meter and warm-up pools geared toward swimming competitors. Option 3 is a purely recreational pool with water slides and a circular “moving river.” Option 2, the one recommended by the firm, is essentially a compromise mixing a 25-meter pool and a separate recreational pool.

In round numbers, Option 3 is the most expensive to build at $11 million. The price tag for the 50-meter Option 1 pool was put at $9 million, while the compromise Option 2 was the cheapest at $8 million.

But the more significant fiscal impact may be the ongoing cost of operating the new facility. Option 1 is hands-down the worst option for the city’s budgetary condition, with a projected initial net loss of $450,000 annually growing to $550,000 annually within a few years. The compromise Option 2 would have less than half as large a deficit, while the all-recreational Option 3 pool would essentially pay its own way with a minor annual operating loss of less than $5,000.

None of this is meant to disparage the sincere and dedicated effort by swim competition enthusiasts to advocate for new facilities for a sport that they love. Competitive swimming contributes to the health of our community and benefits many of our kids. The problem is that their push for an expensive new facility primarily for their exclusive use comes at a time when the city remains in deep financial difficulties.

Option 1 advocates argue that if they got their new 50-meter pool, the costs could be offset by closing Civic Pool where the swim groups now primarily operate. But the Aquatic Design Group study shows that even if Civic Pool were closed, the savings that could be achieved wouldn’t be nearly enough to offset the big new hole the new facility would create in the city budget. Civic Pool operates at about a $100,000 a year net loss, in part because the groups using it were paying only about $74,000 of the $179,000 annual operating cost at the time of the study.

Advocates of a 50-meter pool are holding up the Roseville Aquatic Center (actually a facility that includes both recreational and competitive swimming) as an example of how hundreds of thousands of dollars in new revenues will flow into the City of Davis due to competitive swim meets if their new facility is built. However, those monies apparently aren’t flowing into Roseville city coffers. The consultant’s study showed that in one recent year the Roseville pool complex ran up a $350,000 annual operating deficit for that city. After meeting with aquatic groups, the consultant concluded that Davis’ 50-meter pool would host only two regional meets per year – clearly not the level of activity that would change the city’s economic trajectory. On the other hand, a purely recreational pool drawing 120,000 visitors a year could be a regional draw, the consultant told the city.

One telling conclusion of the consultant’s report: “Given the high cost generally associated with developing and operating 50-meter pools, it is unrealistic to assume that any city would have the financial wherewithal to own and operate multiple aquatic facilities with large rectilinear pools….”

Interestingly, some aquatic complexes focused on recreational amenities for families actually turn a profit, raising the question as to whether the right pool project is on the table now for Davis. But if the city does want to focus on meeting the needs of the organized swim groups, some options that would reduce the city’s price tag or help pay for a new facility are worth considering:

— The organized swimming community has promised to help pay for a new facility, but hasn’t been very specific in its public statements about how much and when and how. The swimming groups should organize a public campaign to collect cash and pledges to put up a substantial contribution toward project construction. These commitments should be secured in advance. The minute the city writes a $10 million check to build a facility, additional private contributions would likely dry up like a pool deck on a hot summer day.

— They aren’t the biggest users of city swim facilities currently, but the construction of a sparkling new 50-meter pool next door could energize and expand Davis Senior High and middle-school swim competition programs. The Aquatic Design Group recommended in its January 2013 report that the school district be asked to enter into a shared use agreement so that the district pays its fair share of the costs to building and operating a new pool complex at Community Park. We need their agreement to help up-front too.

— The opening of a new pool complex provides a natural opportunity for an experiment in whether contracting out the maintenance and operation of the pool, either to a private vendor or a non-profit partner, could reduce pool operating costs and result in less of a need for a public subsidy. Use of novel procurement methods could also hold down costs. Of course, these approaches might work for any of the three pool configuration options identified by the consultant.

— A concept put forward by organized swim groups should also be explored – selling the site beneath the old pool for the city’s benefit. There are lots of questions about the viability and equity of this approach, including whether the site next door to City Hall as a practical matter is best used for another public purpose and whether the proceeds from a sale belong to the taxpayers or the swimmers. But theirs is a logical option worth examining.

— If a new community pool is not in the cards for financial reasons, could the city reach agreement with UC Davis to allow greater access for its competitive swimmers to the Schaal Aquatic Center and its beautiful Olympic-size pool built just ten years ago? It’s a fair bet that a number of participants in the city’s competitive swimming programs are either UC Davis students or workers or campus alumni. Here’s another opportunity to improve town-gown relationships.

These aren’t all new ideas. But their examination is consistent with the careful and analytical approach I recommend be taken to any project being considered for public funding. Given the city’s formidable list of facilities that need repair or replacement, we must make sure that every additional Davis taxpayer dollar dedicated to a “rebuild Davis” effort is used wisely and is leveraged to the hilt.

Share:
Tags:Aquatic CenterCity of Davisparcel taxPoolRoads
Previous : Will Council Put to Rest the Water Rate Discussion?
Next : Eye on the Courts: When Should You Talk to the Police?