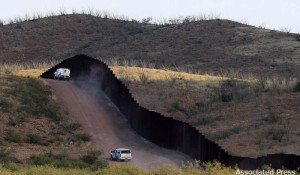 For those of you who have not seen the movie, here is a brief synopsis from Rotten Tomatoes: “A failed global-warming experiment kills off most life on the planet. The final survivors board the SNOWPIERCER, a train that travels around the globe via a perpetual-motion engine.”

The population of the train is strictly segregated into different cars by class with the occupants of the front enjoying immense wealth and privilege while those in the back receive barely enough to sustain life. Of interest are the means by which this strict segregation is justified and maintained.

It is my opinion that we have a similar situation in the world today and a very small part of it has arrived on our southern border. We live in a limited space called earth rather than Snowpiercer. Our resources are finite and our population is growing.

We are segregated into different cars that we call countries. These countries have variable degrees of wealth. In the front of this train are the western democracies as well as a few smaller very wealthy states such as Japan and the Arab Emirates that have been successful with slightly different strategies from the West and some newcomers such as China which have amassed wealth using still different means. In the back of the train are what we call third world countries.

Within each of these societies are those of greater and those of lesser wealth. Some have chosen to treat their population more equitably, some not so much so. However, there are those pesky people at the back of the train who just can’t seem to get their act together to overcome ruthless exploitation by the “haves.”

This exploitation has sometimes taken the form of military land grabs, sometimes political or religious take-overs with exploitation or elimination of the minority group, and sometimes by financial exploitation.

We have experienced two of these in the southern United States. First we have the military annexation of the southern United States including Texas, New Mexico, Arizona and parts of California. Then we have the financial co-opting of many workers from Mexico and areas further south for labor so inexpensive that only those who are fleeing still more brutal conditions will accept it.

What is the US position on the treatment of refugees? Here is an excerpt from the Department of State: Appendix E Overview of US Refuge Policy:

“The United States works with other governments and international and nongovernmental organizations to protect refugees, internally displaced persons, and conflict victims, and strives to ensure that survival needs for food, health care, and shelter are met. The United States has been instrumental in mobilizing a community of nations to work through these organizations to alleviate the misery and suffering of refugees worldwide.“

From this, it would appear clear that we are, by unilaterally making the decision to repatriate the children on our border without due process, clearly abridging our own policy to “work with other governments, international and non governmental organization to protect….”

Seemingly safe within our First Class car we, as a people, have been content to unquestioningly accept our luxuries as due us by our position as inhabitants of this country. Many of us have achieved our position by birth to “first class” parents, not by any effort of our own. We tsk over pictures of refugees fleeing distant wars and famines, are critical of those who will not provide aid, and ignore or condemn the same needs presenting on our own border.

My question is: Is this really the best that we can do? Shouldn’t we apply our own principles of due process and protection of refugees? Can we not as individuals, private groups, and as a nation act with even a little more compassion toward those who are fleeing danger at home? Those facing life-threatening circumstances in Coach – into which they were born and now seek, not to live off our wealth but to work for a place in our car, rather than face death at the hands of gangs, or militia, or poor nutrition or medical care – are deserving of a better fate.

What outcry do we hear? Do we hear calls for the Public Health Service or Doctors without Borders to help provide medical care for these children? Or for Bill and Melinda Gates, or Brad and Angelina, or George Soros or other billionaires to help set up assistance?

If so, I am not hearing about it. What I hear are cries to throw them back out of First Class into the back, “where they belong.” I hear cries to bring in the National Guard to shore up the border.

And what is the rationale for these cries? What I hear most often is that “we” cannot afford it. But my answer is that we can and should. The cost would be for the wealthiest of us to do three things.

1)      Make the realization that human life is more important than our toys and trips (yes, mine to Hawaii included).

2)      We would have to decide to promote the sharing of our wealth with those less fortunate than ourselves and as policy, not just a suggestion. We have already seen how far private charity falls short in alleviating suffering.

3)      We would have to agree to put our stated principles into action instead of merely paying lip service to them at convenient moments such as the 4th of July.

If the wealthiest among us were to lead the way on establishing the more egalitarian society that we claim to be, others would over time, recognizing that their way of life was not being threatened, accept this new precept that places human life above material wealth.

I am not actually arguing for anything radical. I believe in the Christian and American principles of charity toward others and a helping hand for the less fortunate. I believe in basic human rights. I believe these rights apply to all humans regardless of location of birth or national borders.

I believe that we have the ability to live up to these principles and that what is lacking at this point is our awareness and willingness to do so. I believe that we will not be the country that we claim to be, but which we only aspire to be, until we stop turning our backs on the helpless on our borders and welcome them into our society until which time they can safely be returned to their own.

Share:
Tags:ChildrenImmigrationRefugees
Previous : Eye on the Courts: When Should You Talk to the Police?
Next : Commentary: A Lot of Dirt, Trucks, For Cannery