At the last city council meeting, the council moved for staff to prepare the Prop 218 to adopt a five-year water rate structure with a 13 percent fixed component and an 87 percent variable component.

Herb Niederberger, following the Measure P election, indicated that the city would be eligible for state revolving funds as long as the council followed the strict timeline of having a rate structure ready to enter the Prop 218 process by July and in place with no legal challenges by October 1.

Will this bring an end to legal action? In public comment on July 2, Don Price argued that fear of legal action was a red herring. He explained, “The only reason that the council has been plagued with legal action this past year is that people didn’t like the experimental rates that the city council voted for before. I can’t imagine anyone bringing any kind of legal action or challenge to an 87-13 rate.”

There has been some discussion regarding equity in the rate structure. Staff writes, “For some, equity could be expressed that one class of customers may use 25% of the water and therefore should pay 25% of the fees. This type of exclusive, so-called, social equity does not work for every water system and is often disputed by water rate experts generally because of the high fixed costs associated with running a utility.”

Staff goes on to note, “It should be noted that the City does currently have a low-income water rate assistance program whereby qualified owner-occupied households can receive a discount of ten dollars per month on utility rates.”

Some councilmembers have indicated that they wish to expand that program in order to cover more low-income residents. 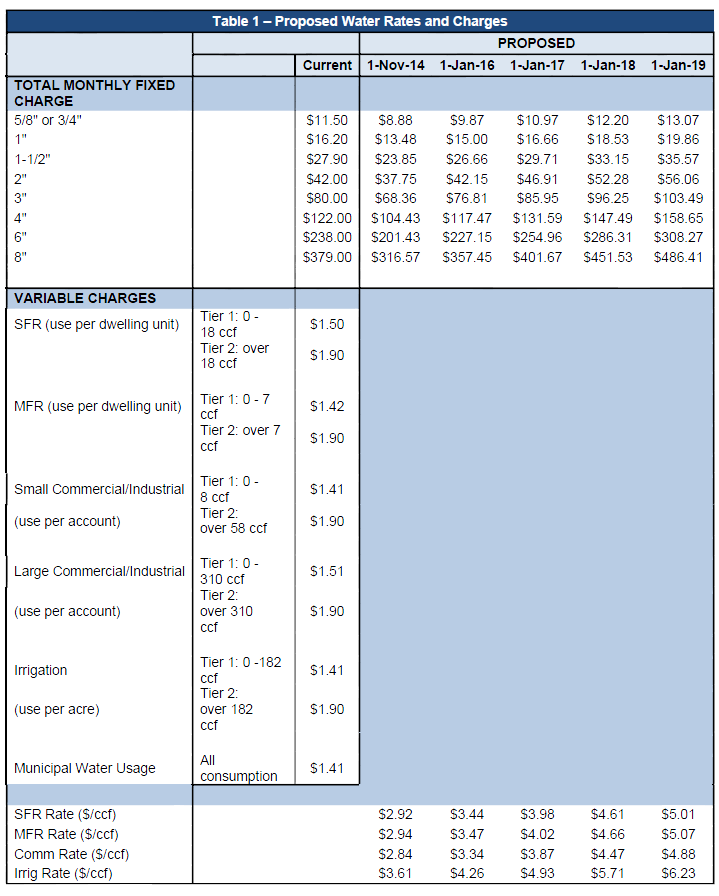 Bartle Wells has prepared a draft of the Water Rate Cost of Service Study. Writes staff, “The purpose of this study was to review the City’s current water rates and develop alternative rates structures to fund the regional water supply project and provide funds for necessary additional capital improvements and for operations and maintenance of the water system. The result is a comprehensive cost-of-service water rate study and the development of a long-term financial plan.”

Staff recommends that the city council adopt the Water Rate Cost of Service Study in its current draft form, subject to minor modification and final publishing in July 2014.

An issue of growing concern is water shortage and drought. Staff believes this addresses those concerns as well.

“Due to continuing multi-year drought conditions in California, on January 17, 2014, Governor Jerry Brown proclaimed a State of Emergency and directed state officials to take all actions necessary to prepare for existing drought conditions and their impact on water supplies in California,” staff writes. “The amount of water available for purchase by the City is often affected by climatic and other environmental conditions such as the current drought. In such instances, it may become necessary for the City to implement water conservation measures and to establish a surcharge on the rates (Water Shortage Surcharge) for its water service fees.”

Staff continues, “The Water Shortage Surcharge will be established to ensure the City receives sufficient revenues to recover its costs of providing water service when consumption decreases.”

“At the time of this notice, a Water Shortage Surcharge is not anticipated to be in effect,” staff adds.

If council approves the rate design and the new rate study on Tuesday and authorizes the Prop 218 notice, the notices would be mailed on July 31. There would be a public hearing on September 16 on the majority protest for Prop 218 and the 1st reading of the water rate ordinance. The second reading would take place on September 30 and the new rates would go into effect on November 1.

38 thoughts on “Will Council Put to Rest the Water Rate Discussion?”