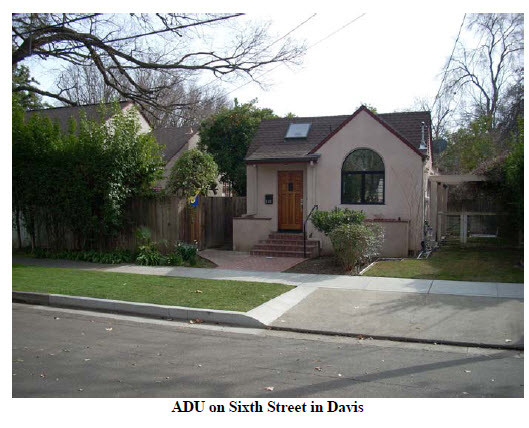 In July of 2013, the Davis City Council, by a 3-2 vote, made a very controversial decision to change its Affordable Housing Requirements and allow credit for Accessory Dwelling Units (Granny Flats or ADUs) to count toward inclusionary requirements on a 50 percent basis.

In the wake of the loss of RDA funding, the city has limited options, given Measure R’s limitations for new large housing projects on Davis’ periphery, city officials successfully argued.

Critics charge that there is no guarantee ADUs would be rented or would end up as affordable units.  Moreover, ADUs may work well for college-age students and possibly other populations without families, but will not work well for family units.

“ADUs are not going to provide the ideal living environment for all the types of population in the community that we’re trying to target,” the city’s new Community Development Director Mike Webb acknowledged.  “We also heard the recurring comment that these units don’t provide for the necessary space for family living.  We’re not trying to suggest that they do.  We are proposing an approach that really takes a multitude of different housing types into account and to really try to expand on those opportunities.”

Tonight the council will consider a possible Accessory Dwelling Unit (ADU) plan supported by a majority of Planning Commission members.

According to the staff report, “The Planning Commission’s work plan includes a project to ‘Promote and facilitate accessory dwelling units – consider appropriate and effective ways to promote and streamline the processing of ADUs while ensuring compatibility with neighborhoods.’”

This work plan item, staff writes, is consistent with the city council goal of a “robust second / accessory unit program.”

According to the city’s general plan, an ADU, sometimes referred to as a granny flat, is a self-contained living unit accessory to the primary residential unit on a single lot. It may be attached or detached from the primary unit.

“The City’s existing ADU ordinance states that a maximum of one ADU shall be permitted on a residentially zoned lot where at least one, but no more than one, single family residence exists on the property,” staff writes. “Staff and the subcommittee recognize that ADUs may not be used for housing and may be used for home offices, exercise rooms, dens, game/hobby rooms, and so forth. If they are used for housing, there is no guarantee they will house lower income individuals or families.”

An ordinance is not before the council at this time, and staff would be directed to return to the Planning Commission and then the city council with zoning ordinance changes to implement the supported options.

After council directions, zoning ordinance amendments will be drafted and brought back through the planning commission and city council for adoption.

Staff will invite stakeholders to review the draft ordinance when it is available and inform them of about opportunities to comment. 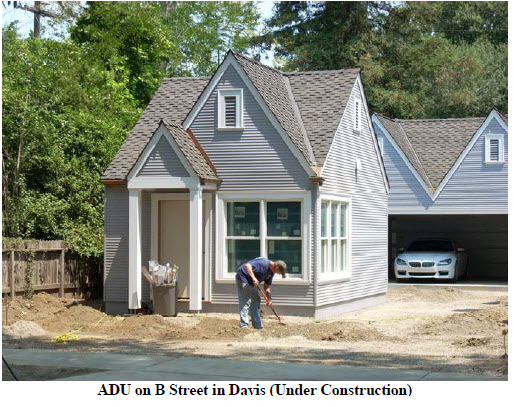 In 2013, staff mailed surveys to owners of 131 single-family properties with approved ADUs.

Of 52 responses, 24 ADUs are rented and an additional eight are occupied by someone as a primary residence.

On May 28, 2003, the city council adopted Ordinance 2126 with the current ADU regulations.

This ordinance was adopted to comply with a State requirement that ADUs be allowed by right within single family residential areas with a ministerial building permit provided they comply with standards.

The use of ADUs for affordable housing has been quite controversial.

Darrell Rutherford, the Executive Director of the Sacramento Housing Alliance, spoke out against the affordable housing provisions by the city stating, “I stand here tonight a little confused as to why a progressive community like Davis is no longer taking the lead within the greater Sacramento region in addressing our need for affordable homes.”

“Instead you’re taking a playbook from the county and city of Sacramento as well as a community like West Sacramento – all doing the same thing by revising their affordable housing ordinances to benefit the development community instead of doing what’s right for our community,” he said.

Robb Davis as a candidate in February spoke, adding, “I understand the challenges that we as a city face in providing and maintaining our affordable housing stock in a post-RDA world.  I also understand the need to create plans—in this case the update to the Housing Element—that are accountable to state and regional government guidelines and requirements.”

He continued, “But I am concerned that using approaches like counting accessory dwelling units (ADUs) as part of our affordable housing stock are less than honest and do not reflect a true commitment to meet our obligations,” he said.  “Because there is no accountability structure in place to assure that such units are, indeed, rented at affordable rates, we cannot, with integrity count them as contributing to affordable housing goals.  Further, ‘affordable by design’ does not equal de facto or real affordability.  I have been troubled by this move since it came into effect.”

He added, “It leads to a clear watering down of our affordable housing commitments and does not advance creative problem solving in our post RDA reality.”

“Again, I realize the challenge you and staff face and I understand there may be negative implications for the city if we do not reach obligations.  At the same time I feel it would be better to acknowledge the challenges we are currently facing and commit to a process of finding solutions given current constraints.  I would ask you to move in that direction tonight,” he continued. “Ultimately, though we want to be accountable to broader state and regional entities, we must first and foremost be accountable to ourselves and our vision for the kind of city we desire to be.”

Share:
Tags:Accessory Dwelling UnitsADUAffordable HousingCity of Davisland use
Previous : Will This Year Mark the Return of Tax Increment Financing?
Next : Restoring Faith in Humanity in Ferguson